What Is A Dual Funded Lightning Channel?

Home » Articles » What Is A Dual Funded Lightning Channel? 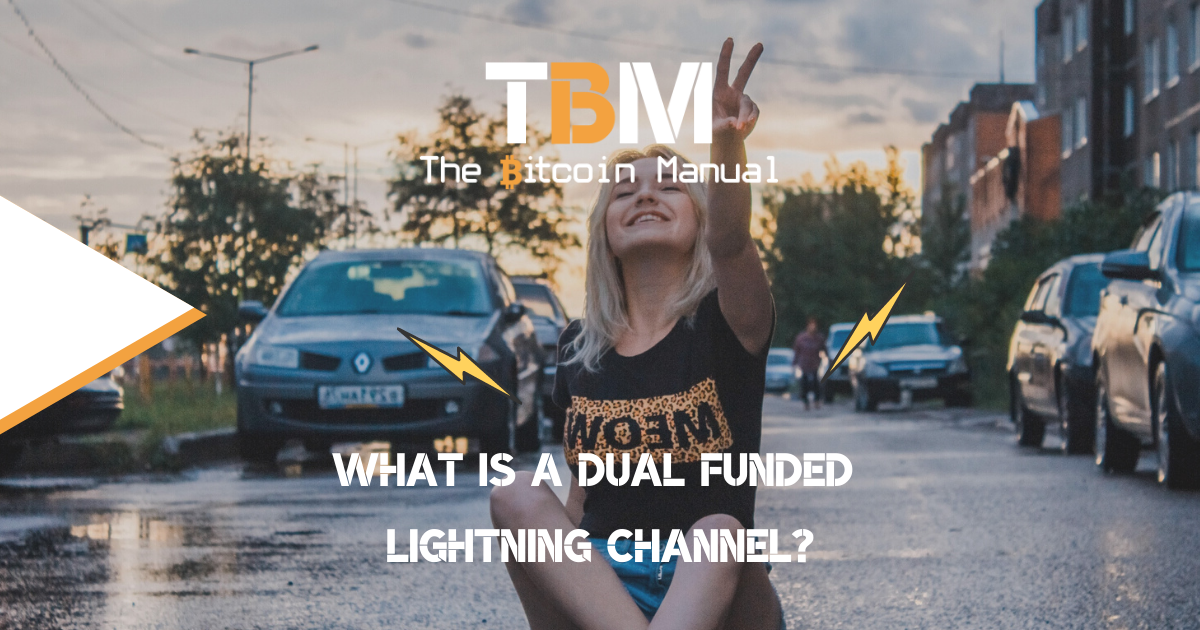 Scaling bitcoin in layers comes with a host of new issues that need to be tackled since you’re establishing new environments and bridges between them. The Lightning Network has been the most popular implementation of these second-layer solutions. It offers fast and instant settlement between parties on the network, making it ideal for daily payments, gaming and content monetisation and much more.

Using a Lightning Wallet in a non-custodial fashion has its limitations since you first need to establish a lightning channel by signing a transaction on the bitcoin base chain to lock that bitcoin into the Lightning Network. Like your standard bitcoin transaction, this will be subject to confirmation on-chain and includes mining fees.

Additionally, once you’re channel is funded, you’re sitting with an unbalanced channel that requires inbound capacity—getting your channel set up and balanced something I’ve had to deal with myself and was a bit of a downer when creating my first LN channel.

Now that you know the pain points let’s look at the solution dual funded channels provide.

What is a dual funded channel?

Dual funding creates a payment channel for Lightning Network users where both parties can contribute funds simultaneously. The underlying protocol, called the version 2 channel establishment protocol, may also be used for the negotiated opening of single-funded channels. Still, its motivating purpose is to provide support for dual funding.

It is a useful option for Lightning users because, up to this point, only the Lightning node that initiated the channel opening was able to add funds to the funding transaction. Dual funding makes managing, opening and closing channels far more efficient in terms of fees and getting up and running with liquidity.

What are the benefits of dual funded channels?

Prior to dual funded channels, the way Lightning Network users would connect to the network is by opening a private channel and funding the event directly. The problem with this approach is that it sometimes leads to unbalanced channels.

Unbalanced channels occur when only one side of the channel has funding. They are an annoyance among LN users because they can translate into payment delays as the other party needs to shuffle funding before they can send.

Currently, the network’s default design is that the channel’s balance belongs to the channel-opening node. However, the new protocol enables both sides of the equation to load the channel. The main benefit of this strategy is that anyone can send payments immediately using the new system.

For spenders, single funded channels work great. As soon as a channel finishes opening, the user can start spending their funds with all of the speed, efficiency, and privacy benefits of LN. But receivers who open a new single funded channel can’t use it to receive funds until they’ve spent funds.

This creates problems for merchants who want to accept payments over LN but who aren’t yet in a position to pay an equal amount of their costs over LN.

One solution to this problem is to allow channels to be dual funded, immediately allowing spending in either direction once the channel opens.

Dual funded channels don’t need to start with the same amount of bitcoin to fund a channel on both sides. A merchant or user who wants to receive a significant amount of bitcoins may only need to contribute a small part of the total channel capacity to get started and have inbound liquidity.

Cheaper non-custodial use of Lightning

Dual-funded channels also reduce the cost of adding liquidity to Lightning channels. Opening a dual-funded channel requires fewer on-chain Bitcoin fees. As a result, deploying capital into the Lightning Network gets cheaper and more efficient, which might increase liquidity on the network

Now dual funding is available; its effectiveness will rely on finding willing participants. To help alleviate these issues and play matchmaker. Dual funding participants will be able to find those looking to partner up via their node. A new proposed node announcement could help buyers and sellers of inbound capacity find each other in a decentralised fashion.

Additionally, other dual funding markets could be a reality in the future, and the possibility of Lapps and Lightning-enabled exchanges help fund clients who may want to spend bitcoin with them.

Dual funding isn’t without its trade-offs, as it does require each party to reveal ownership of one of their UTXOs to the other party. Similar to the case of other protocols where this is required, such as a coinjoin or a payjoin. This can be a potential attack vector. A malicious actor could monitor these dual channels or request to create them with the intention to learn information about who owns which UTXO.

The dual funded protocol may also be used to open new single-funded channels, which could be used to help aid anonymity. It may also allow parties to use the protocol’s ability to communicate node preferences and find mutually acceptable values for various channel parameters.

When was the first dual funded channel created?

The world’s first dual-funded Lightning Network channel was opened on block 681,753 of the Bitcoin mainnet. Blockstream used its c-lightning implementation of the Lightning Network protocol to open the channel and announced it via a blog post.

South African bitcoin pleb falling down the rabbit hole and willing to share every bump, scratch and knock along the way
View more articles from this author
PrevPreviousWill Value For Value Monetisation Really Catch on?
NextZebedee App Opens Up Bitcoin Gaming UniverseNext