What Is Chaumian eCash in Bitcoin?

Home » Articles » What Is Chaumian eCash in Bitcoin? 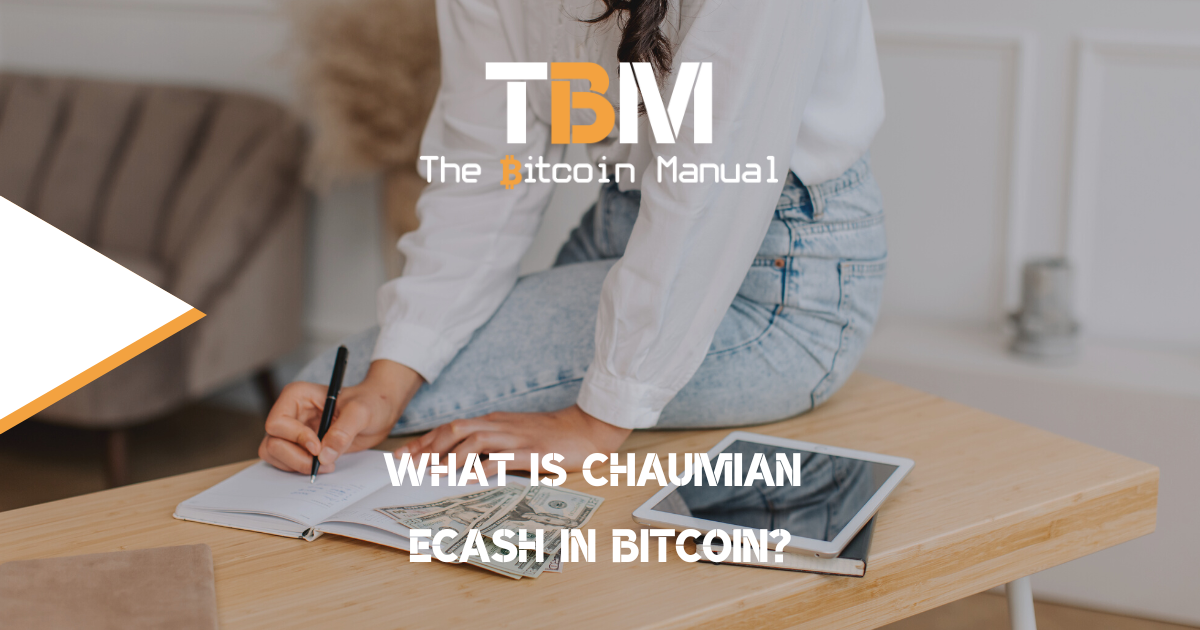 The bitcoin network suffers from limitations in its design and needs to remain decentralised and free from political pressure. The trade off’s made to ensure bitcoin remains secure means the base layer cannot scale to billions of people. The bitcoin network can only process six transactions a second, and that is never going to be enough to support global demand.

Suppose bitcoin successfully scales to a point where the majority of the planet can use this accounting system as a method of value exchange. In that case, it will require a range of solutions that work for different use cases without changing consensus and the trustless safety of the base layer.

Second-layer solutions like the Lightning Network and Liquid Network have emerged as methods to conduct bitcoin transactions that bypass the need for final confirmation of the base layer, but even these solutions have their limits.

Despite the emergence of these networks, custodial use of bitcoin has shown no sign of slowing down, even with the risks involved. Custodial scaling refers to centralised exchanges and Fintech companies that hold bitcoin on your behalf, the same way a bank does with your fiat money. You use the service to pay others, and the custodian keeps track of balances and credits the different users accordingly. Since funds never have to validate on the chain, it allows for off-chain transactions with an element of trust.

Many people find this use case familiar and are willing to trust institutions. Still, that trust does come with risk, as we’ve seen with many unsecured creditors losing access to their funds should one of these institutions go bankrupt.

While custodial entities provide significant off-chain scaling to Bitcoin, this scaling method of Bitcoin is often considered inadequate because you have to permit access to use your funds and redemption is not guaranteed. Custodial services are also subject to legal and political pressures, such as freezing and seizing customer funds.

Additionally, as more funds flow into this solution, custodians holding and managing funds create a massive honeypot of customer funds and data that becomes an attractive target for hackers and makes it easier for governments to seize funds through legal means.

While those who use the bitcoin network properly are not under threat, encouraging others to use bitcoin in a permissionless fashion or at least take back some control, new options need to come to the market. To assist with the migration from centralised entities or to give entities like this more competition, a solution in Chaumian eCash mints have been proposed.

What are Chaumian eCash mints?

Chaumian mints, also known as Chaumian banks, or blind mints through blind signatures, allow anyone who runs the protocol and accompanying software to create a walled garden with bitcoin as the underpinning of value inside the system. Users can deposit and withdraw funds from the mint to the bitcoin base chain or second-layer solutions, and once funds are placed in the mint, they can be used to transact with different mint users.

Unlike custodial services that manage funds with complete oversight, the mint operators do not know the number of users, their identities, account balances, or transaction histories. Additionally, mint transactions are cheap and can be performed without limits.

Mint implementations, like all centralised custodial services, expose users to custodial risk in the form of operator absquatulation and mismanagement. To fix this, the mint operation can be federated, with all operations performed by a quorum of nodes controlled by different parties.

Privacy leaks from a Lightning mint come in two forms, internal and external, when a mint operator or an outside actor, respectively, observes sensitive information. Blind signatures protect against internal privacy leaks, making them a strict improvement over custodial Lightning wallets.

The security of a Lightning mint is weaker than that of a self-hosted wallet. A quorum of federation members can abscond with funds. However, compared to a standard custodial Lightning Network wallet, security is greatly improved.

Additionally, federation members might be located in different jurisdictions, making the mint robust to regulatory interference. Furthermore, members might be entities with online reputations, such as anonymous Bitcoin Twitter users with an established history of productive shitposting, providing further assurances against mismanagement and fraud.

Mint operations are extremely lightweight, similar to Lightning Network transactions, so scaling properties are similar to the Lightning Network itself. Users need not manage their channels, so a well-capitalised federation can open channels efficiently, lowering the per-transaction channel management overhead.

Anyone who has used the Lightning non-custodial knows that for all its benefits keeping a node running and managing a wallet present several challenges, such as channel unavailability due to force closes, the unpredictability of the on-chain fee environment, the complexity of channel backup, and the involved the need to manage liquidity.

These problems require a skilled node operator to be used effectively and provide a considerable burden for Lightning network users. If this remains the case, normies may have no choice but to use hosted Lightning wallets, compromising their privacy and exposing them to custodial risk. However, with mints, you now have an interoperable alternative with Lightning, and you can move between these ecosystems cheaply and efficiently.

While the infrastructure is still being built to channel interoperability, eventually, we will see standardised protocols for communication between wallet interfaces and mint backends. This would allow users to use different backends with the same local wallet interface, encouraging competition in the market.

Current implementations of Chaumian eCash mints include CashuBTC and FediMint, which now lay the foundation for Federated mints and Lightning network compatibility.

Federated Chaumian eCash does bring trust into the equation, but it is supposed to cater to a specific set of users. The setup could provide an alternative to custodial services; it could complement custodial services as centralised exchanges could run mints for their customers.

But it levels the playing field; federated mints would function as another tool to bring additional privacy to those not willing to self-custody their bitcoin. These users can choose from a range of mints to use and have more oversight over the ones they use, as different mints build up a reputation.

If federated convenient that people want to use it, then we will bring more privacy to the network and its users and gives these users an easy-to-use training ground until they are ready for total self-custody.

If you want to learn more about Chaumian mints, use this article as a jumping-off point and don’t trust what we say as the final say. Take the time to research, check out their official resources below or review other articles and videos tackling the topic.

Do you have self-custody of your bitcoin? Which method of self-custody are you using? Do you have a hot wallet, cold storage, or run your own node? Have you helped others with their self-custody or act as a custodian for your family and friends? What do you think of Chaumian mints?

South African bitcoin pleb falling down the rabbit hole and willing to share every bump, scratch and knock along the way
View more articles from this author
PrevPreviousDAO’s Don’t Make Sense
NextWhat Is Pear Credit?Next