Why Has Bitcoin’s Price Dropped? 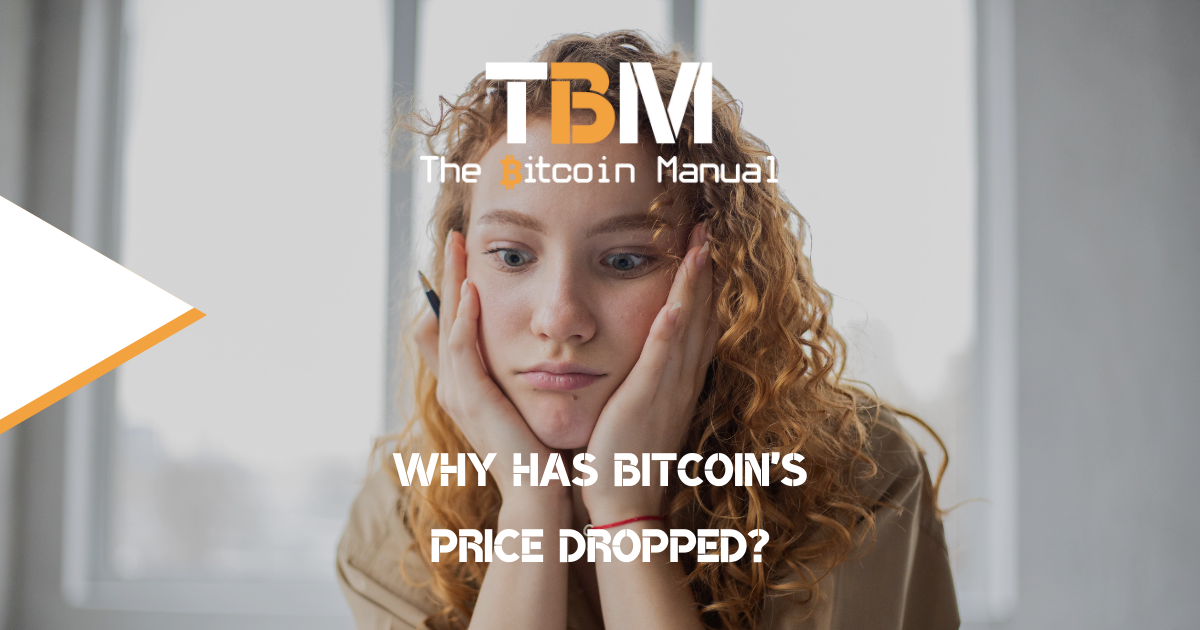 It wouldn’t be Bitcoin without mentioning its price would it? I mean, that’s why we’re all here right? “When moon ser?”

However, if all you’re doing is looking at the price chart, panicking when you see a sea of red and thinking when you can cash out back in to fiat, then I feel you haven’t really understood what is going on with Bitcoin. At all!

A quick check on your Bitcoin node would show that nothing has fundamentally changed about Bitcoin’s blockchain technology, protocol or the way it’s mined. In fact, it seems there’s been more developments happening with the lightning network and countries looking to adopt Bitcoin themselves.

So why has Bitcoin’s price dropped… again?

Can’t even finish that sub-heading, you know where this ends up. OK fine, yes I will.

Overleveraged degen traders have been at it again with close to $1 billion worth of liquidations getting wiped over the course of 24 hours.

People will never learn and the whales are basically in their element, picking off the price points they want so that they can accumulate more sats!

What the degens are doing is putting their Bitcoin up as collateral with a hope that their price target is hit by a certain date. If they get it right then they will get rich quick off their gamble. For more information on what “shorts and longs” are, Che wrote a great post about it here.

These folks are playing with fire but they obviously love the sensation of getting burned as this happens time and time again.

There’s no way that everyone who holds Bitcoin decided to actively log in to exchanges, then dump everything at the same time because it would take way too long and there’s not enough liquidity across all the exchanges for that to happen.

The liquidations happen instantly and are automatically triggered when certain conditions are met. It’s just that so many people put up so much Bitcoin for collateral that when the liquidations are triggered, it happens en masse.

The best way to counter this? Don’t use leverage and set buy limit orders lower if you want to so you can catch some cheap sats when degens get liquidated.

Never far away is our familiar friend, the good old FUD. These clickbait headlines are aimed at striking fear into your head and make you do things that aren’t rational.

The latest round of headlines seems to be focusing around governments or central banks banning Bitcoin (particularly in Russia), the energy usage, I even saw an article that went in to great depth about Ponzi schemes!

These articles now are so unimaginative that I get bored of giving them any time in my own blogs.

However, it seems that I underestimate just how many people actually believe these mainstream articles as the sentiment across social media and in conversations I have with others has changed to fear.

If you’re going to be selling when a slight bit of negative news spreads then you need to do more research about Bitcoin and have a much longer time horizon. Bitcoin is not a get rich quick scheme.

The best way to counter FUD? DYOR and increase your knowledge.

HODL – Simple But Not Easy

Times like this when we’re in a sharp drawdown is where the HODLer is in their element. For someone who has a really low time preference and is HODLing for the long term, the only thing that matters is to get more Bitcoin, increasing their stack to a target amount and being laser focused on it.

From this perspective, a drop in price means that for the same amount of fiat currency, you can get more sats. When you consider that fiat is guaranteed to lose its purchasing power over time thanks to inflation, to me, it doesn’t make sense to keep any more of it than I have to in there anyway.

I have a savers mindset and I’ve been punished for being frugal with my spending with 0% interest rates whilst watching prices of houses, utilities, goods and services increase by double digit percentages in the UK.

Yes, there’s volatility with Bitcoin but I rode out the 2018 bear market after getting rightfully rekt when I FOMOed in at the peak in 2017 but held what I had. What’s the point in selling when you’re down 80% on paper anyway?

Therefore, its times like this where the price is dropping, the HODLers will be doing anything they can to buy some more to add to their long term stack.

If you really can’t stand the drawdowns though, then keep calm, turn off the charts, put your Bitcoin in a safe place like a cold wallet, go to the pub and wait for this all to blow over.

British bitcoin pleb falling down the rabbit hole and willing to share every bump, scratch and knock along the way
View more articles from this author
PrevPreviousWhy Bitcoin Needs Layer 2 Solutions
NextA Coloureds Case For BitcoinNext