A Coloureds Case For Bitcoin 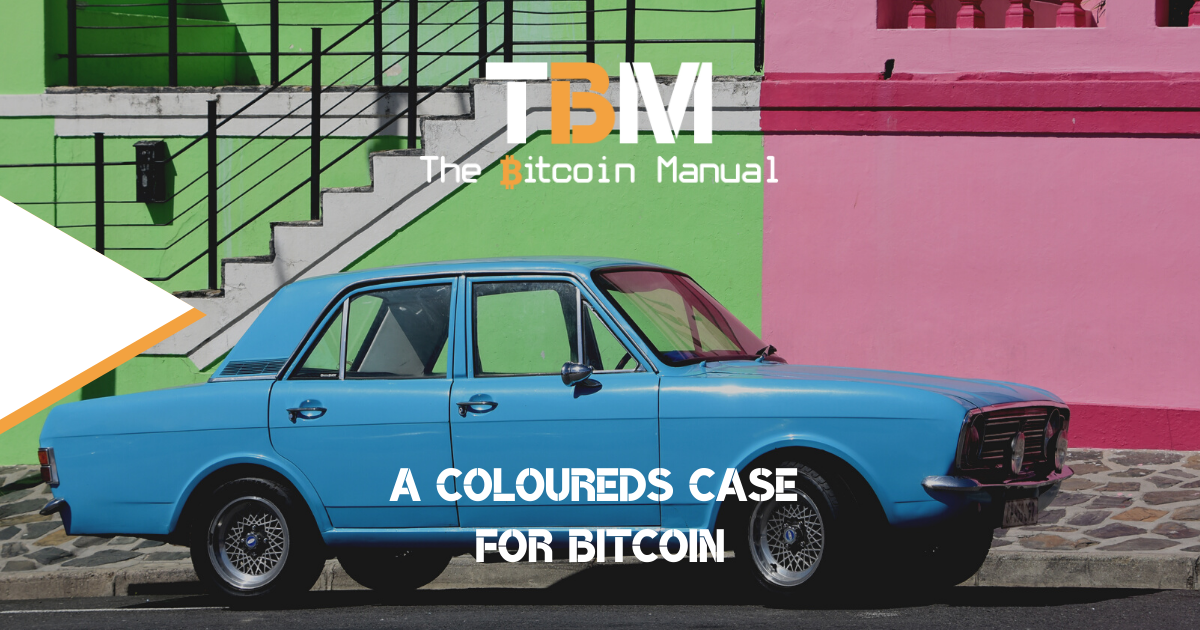 Growing up in South Africa, you cannot escape the pull of identity politics, it’s part of our history, and something even the “born free” generation has to deal with or feel obligated to deal with and factor into their lives. Racism perpetuates through our local politics and culture, and despite integration, people still blame the gross poverty divide on racism. South Africa is famed for having one of the highest Gini coefficients globally, with the blame placed on the financial exclusion of specific demographics.

Very few people consider the move to a covering currency, the South African Rand and the mismanagement of the currency were forced to use, nor the global break away from the gold standard. Two factors I think were far more influential and remains influential today.

Like many South African’s I believed in the idea of identity politics and racist systems holding back prosperity. I accepted it without thinking about it critically, and it warped my worldview. Once I started to reason from the first principles and see how the incentives of the monetary system work, I began to shed the fallacies I once held.

I am not trying to make excuses for crimes against humanity that were perpetrated in the past based on racial divides. Still, I am saying that we cannot hold onto this big boogyman as the be-all and end-all towards prosperity. Eliminating racism, in any shape or form, is not going to do much to drive economic value for large swaths of people nor allow them to excercise their sovereign rights; only private property rights and access to resources can achieve these goals.

The fight for freedom and the stripping of value

South Africa has a deep history with civil rights and the bringing down of the Apartheid government that ruled for nearly 50 years is a big part of what defines the country today. Civil rights for all were finally granted to all in 1994 with the first open elections to all citizens, and with it came a change of government. During the transition to a free society, people of all demographics could now participate in the broader economy. You could study a particular field, you could work in a range of jobs, you could access financial services, and of course, access public programs funded by the government.

A free and open soceity for all pushed millions into more robust economic activity as people became more educated and could access resources. There was naturally an economic boom as foreign investors flocked in, and it seemed like South Africa was on the up, but this was all short term stimulus. Freedom for South Africans came 23 years after the world left the gold standard, and with fiat money comes the consolidation of power.

As fiat money continued to devalue each year, asset holders benefited, and the vast majority of asset holders happened to be those who benefitted from apartheid.

A phrase is often thrown around in political discourse in South Africa and seems more like a defamatory statement than an actual economic description. The term is thought to mean everything from an oligopoly owned by a super-wealthy (white) elite that dominates large sectors of the economy consisting of colluding monopolies to business groups that are critical of corruption and alleged state capture.

Due to the countries history and the way the modern monetary system works, asset holders who happened to be white continued to benefit as labourers and cash holders were stripped of their value. It’s the same as in every country; we can see rich and poor divides widen each year; the only difference in South Africa is we’ve done it on racial lines and started with a broader gap due to previous government policies.

White monopoly capital is simply a narrow view of the Cantillon effect.

The new government claimed to want to correct the past issues. Still, under a new government, the same rules applied, and nepotism continued. As with every other government in the past, corruption continued, and through the tender system and the BEE (Black Economic Empowerment) policies, it was supercharged.

All the new government has done is by decree cutting off certain people from the monetary spigot and giving it to others. Redirecing the Cantillon effect to those who have weaselled their way into the new government inner circle.

It is no different from previous governments; the incentives remain the same, only the faces have changed.

Coloureds caught in the middle.

Let me start by saying I disagree with identity politics; that is not to say I don’t acknowledge different cultures and belief systems. I draw the line that specific subsets of a demographic should get preferential access to resources. In South Africa, it’s not simply a black and white issue, but other groups make up the country; one is known as coloured. A miscellaneous group of people with a mixed background from Khoi San, European, Malay, Indian and African tribe heritage, it is a spectrum. Still, for simplicity sake, people were grouped under this category.

Under the apartheid government, coloured were seen as separate from black or white people and to this day, it’s an idea that remains. While the so-called Black demographic (also a spectrum of different tribes and beliefs) are the majority, the coloured demographic is a distinct second in size.

Speaking to coloured people in South Africa, there’s an unspoken tale of being the middle child of the country. There is a view that they are forgotten people who have no representation or support for their interests. Now I am not here to create a new sob story; I am only trying to provide an idea of the sentiment.

Since we live in a highly politicised world where resources allocation is determined by who shouts the loudest in a room full of bureaucrats, it’s not exactly the most efficient. I would go as far as to say the vast majority of resources are a complete misallocation and not what the market would do if left to work itself out.

When you’re not one of those close to the inner circle, and you don’t have representation to play the game, you will be left out in the cold. This is how the fiat system works; it consolidates resources by stripping citizens of wealth through tax and inflation. It rewards asset holders who can use their wealth to push political will to their benefit, and greater centralisation occurs.

Governments become bigger, less efficient, more wasteful and entirely more corrupt. Coloured people have accepted their fate and continue to live their lives, but this doesn’t have to be the case.

The case for your treasury

Instead of relying on help from political parties and individuals that are entirely self-serving, people who have been marginalised should consider building up resources that cannot be taken from them. Money makes the world go round, as they say, and if you have it, you can shape your world to your views. Individuals and communities can use bitcoin’s permissionless system to acquire a store of value that they can then use to acquire the products and services they need.

Instead of waiting on government handouts or public service delivery, you can take measures into your hands. People know what’s best for themselves, communities know what they need to improve their standard of living, all they need is a way to save towards those goals, and bitcoin offers the ideal tool.

People can now save without any third-party risk, without the threat of seizure, without the view of banks and the state spaying on you. As individuals and communities start to acquire bitcoin, they can create circular economies using stateless money.

Having a treasury on the individual or community level will drive grassroots initiatives that properly allocate capital that demand personal responsibility and effective use of capital. It also free’s people from the need for government, and they realise how powerful they are when they stand together and act.

The human capital is alive and well; they might be directionless, but bitcoin can give them direction and tap into a mountain of human ingenuity. Waiting for your government to break the poverty cycle will mean dying in poverty for most of us, so taking the task into your hands is the only way forward for the majority.

Social mobility does exist, but not as a meritocracy.

Any South African reading this will see I’ve made inevitable oversimplifications, and there is movement in terms of class. There are cases where white people are becoming poor, and black and people of colour attain wealth.

My case is that many people have no hope of breaking above the poverty line and improving their standard of living. The longer we remain in fiat, the more of us will be pushed towards poverty, and the Rand is doing an excellent job at stripping South Africans of their wealth.

I am not saying this is only a solution for coloured people exclusively; it’s a solution for everyone. I framed the idea in this way after reading Isaiah book. In South Africa, we have an issue with wealth concentration. Still, instead of pushing the government to take from others and use the currency as a weapon, we need to free ourselves from the oppressive nature of fiat.

South African bitcoin pleb falling down the rabbit hole and willing to share every bump, scratch and knock along the way
View more articles from this author
PrevPreviousWhy Has Bitcoin’s Price Dropped?
NextHow To Trade Derivatives Contracts Using The Lightning NetworkNext