“Yo, What Happened To Bitcoin?”

Home » Articles » “Yo, What Happened To Bitcoin?” 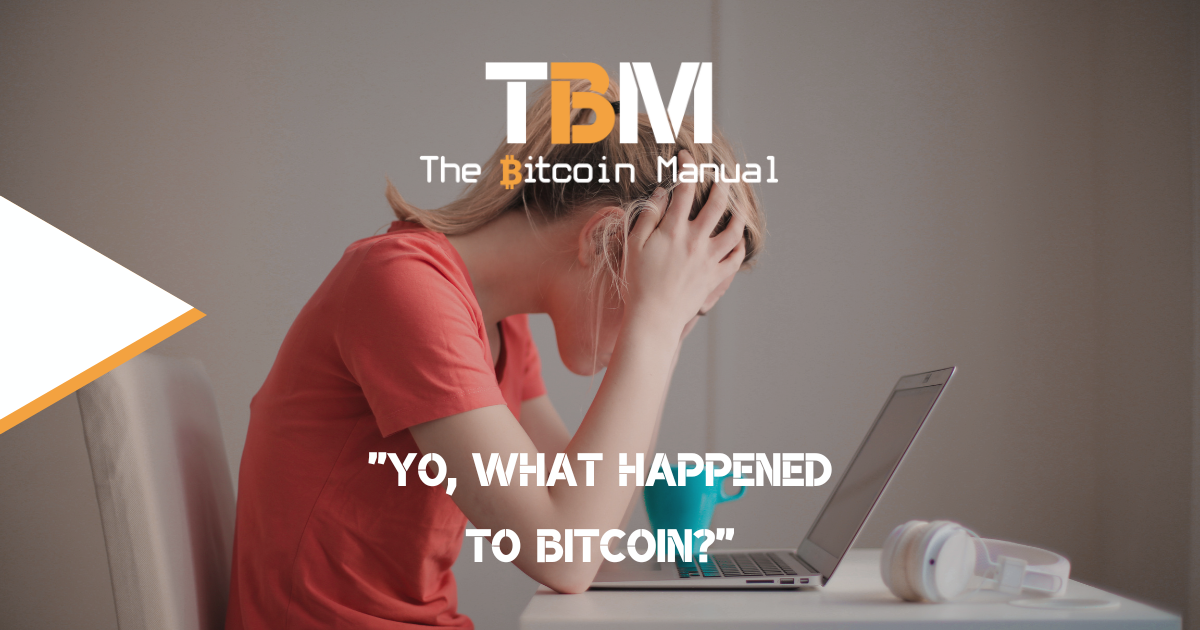 After taking a mini-hiatus, I’ve slowly and reluctantly come back to the “online” life to see a swathe of messages from various contacts asking the question above. Or variants of it.

There have been multiple times throughout Bitcoin’s history when the price has suddenly crashed and some of these have been brutal 85% swings.

Unfortunately, the fiat valuation of Bitcoin is what most normies think about and I’d be lying if I said I didn’t check it regularly either.

However, I’m looking at drops in Bitcoin’s price as an opportunity to buy more fractions of this scarce digital asset, known as sats.

In any case, the messages around “what happened to Bitcoin” come in from people I’ve spoken to about Bitcoin before, they’ve seen some FUD article and think they’re an expert now in this field.

It’s Literally The Same As It Was Before

You might sense an element of “fed up-ness” from various plebs but Bitcoin is literally still doing the same thing its creators intended it to do since its inception – providing a means to transact Bitcoin peer-to-peer as a form of digital cash.

There’s still a maximum of 21 million coins, each one of these divided in to 100 million individual units called sats.

The inflation schedule is still the same.

And the protocol is operating exactly as expected.

So why is everyone sh*tting their pants?

You might be forgiven that degens are limited to the “retail investor” world, in other words, small fry like you and me.

However, it seems that CeFi players, companies that pay depositors for lending their coins, have over-leveraged themselves, painting a target on their back.

These companies rehypothecate their funds to institutions, offering them loans at attractive rates, paying the CeFi company who then pay depositors.

Now there have been smaller crashes we’ve seen which range between 10-30%, which is usually retail getting flushed out.

But a crash on this scale where we’ve had a bull market with hundreds of billions getting wiped, can only be whale degens getting burned.

Bigger whales on Wall Street know how to manipulate the price to liquidate these leveraged bets et voilà, it sends Bitcoin critics and mainstream in to a frenzy.

The funny thing is, if you can call it funny, that the leveraged Bitcoin that exchanges and CeFi platforms include in their service offering, isn’t actually there.

It’s not real and it’s certainly not part of the 19 million that are currently in circulation.

These are the same tools of the derivatives markets of the traditional finance world where additional assets are magicked up out of thin air to create IOUs on the screen of a stock exchange.

Only with Bitcoin and shitcoin exchanges, there’s nothing to stop someone taking a 100:1 bet, which is similar to what currency exchanges offer. With the stock exchange, you can only borrow up to a maximum of 50% of what you hold (i.e. 0.5:1).

In any case, these are very high risk moves of using leverage to acquire more of the asset or stock so we don’t recommend that at all on TBM.

Why bother putting your savings at risk when you can just buy Bitcoin in the first place, then move it to cold storage – it’s far less stressful but do with your money as you please.

I should also add that I’m not an analyst of any kind, these thoughts, observations and a little bit of interpretation are what I’ve understood from my research. You should always do your own of course.

Macro Picture Not Too Rosy Either

Add to all of the above, there’s a pretty awful back drop which everyone across the world is feeling, some more than others, depending on where you are.

You don’t need me to tell you about the events happening in Eastern Europe, adding to an already torrid time with global inflation reaching highs not seen for decades.

We were already feeling the effects of the covid crash and money printing and it’s crushing people’s finances – yet many still think the current fiat money system is working fine and it’s “part of it”!

If it doesn’t smell right…

This has likely meant that those in the more developed nations who treated Bitcoin as a speculative asset have also sold their position to get more cash on hand and maybe retreated into “safer havens”.

Back To The Original Question

So what happened to Bitcoin?

Well, take the fiat price valuation away from the equation for just a second and would you look at that? It’s still motoring on as it was programmed to do.

Every 10 minutes, more transactions get cemented on to the blockchain and it just carries on.

When you change your unit of account to a Bitcoin standard, it’s quite freeing as you know your hard earned sats aren’t going to be diluted.

Once Bitcoin clicks, you then wonder why others don’t join in or at the very least ask themselves, “Yo, what happened to fiat?”

British bitcoin pleb falling down the rabbit hole and willing to share every bump, scratch and knock along the way
View more articles from this author
PrevPreviousBitcoin App: Poof Run
NextHow To Transfer Bitcoin Via USSD CodeNext