What Is A Bitcoin Affinity Scam?

Home » Articles » What Is A Bitcoin Affinity Scam? 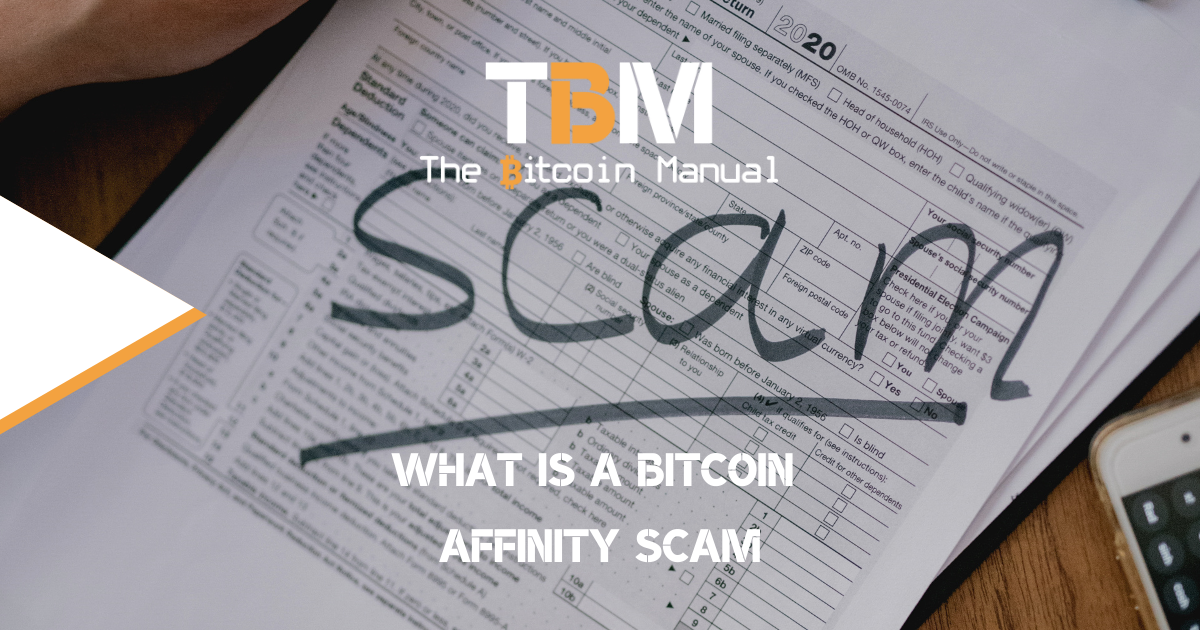 In the bitcoin and crypto space, there are scams galore; you honestly don’t have to venture deep into it. All it takes is listening to the wrong YouTuber, following the wrong Twitter account or reading a PR puff piece masquerading as journalism, and you’ll find someone trying to sell you on a get rich quick scheme or a faulty bill of goods.

There are so many scams that even if I dedicated all my time to solely blogging about them, I wouldn’t have enough capacity to talk about anything else in bitcoin, never mind the more expansive shitcoin space.

If you’re reading this and you are not a bitcoin maximalist, honestly, you’re just here to find something to be upset about, or you’re about to take steps to become a maxi. Yes, bitcoiners often use the word scam for anything crypto and can sound very dismissive. It’s also doesn’t help the cause when bitcoiners don’t take the time to look into the fatal mistakes crypto projects make so they can discern between scams and poor implementation and flawed business models.

It might not make a difference to a maxi. However, normies and precoiners, they still want to understand why bitcoin is different and why these other so-called digital assets are doomed to fail. They want reasons why we think liquidity will dry up in their niche play for tokenisation or get absorbed by bitcoin over time. That is their right and providing a blanket term like a scam for all of it starts to lose its oomph.

In a bid to help arm bitcoiners and precoiners, I thought I’d break down some of the more common scam adjacent projects that are not outright instant rug pulls.

So let’s begin with the bitcoin affinity scam.

What is an affinity scam?

Affinity scam or affinity fraud is a form of investment fraud. The fraudster preys upon members of identifiable groups, such as religious or ethnic communities, language minorities, the elderly, or professional groups.

We invest/trade in bitcoin

These are often small-time scams you’ll see shilled on Twitter, YouTube comments and even instant messaging apps like WhatsApp, Telegram and Discord. The most blatant of these is the old “send me 1 BTC, and I’ll send you two back scam”, and the rest are all derivatives of that. These people and their fake platforms will claim they have found ways to channel bitcoins volatility into making you crazy returns, and if you only purchase x amount and send it to them or deposit it into their fake dashboard, you’ll make bank.

These scams leverage the bitcoin brand and its known volatility and the fact that it has made hodlers rich and apply old school forex scam pitches on it. These are generally small fry operations but can become massive blowups like MTI and Aficrypt in my native South Africa, which turned out to be large bitcoin Ponzi schemes.

I think this pitch had its peak back in 2017 and has died down since, but many of the projects remain around and are looking to confuse people into purchasing their token. They use the name bitcoin somewhere in their title or marketing and claim to be a type of bitcoin or a derivative of bitcoin. The founders rely on the name bitcoin, and peoples lack of understanding or hoping retail investors will associate it with Bitcoin (BTC) and think it’s worth a shot.

They are easy to recognise; the name of the project and token will be Bitcoin + Noun.

A quick look through a shitcoin curation site like Coingecko or Coinmarketrap, I mean Coinmarketcap, will show you at least 100 or more of these token projects.

They will all have some pitch, Bitcoin but faster, cheaper, backed by gold, proof of stake bitcoin, and the list goes on. They are obviously selling you a fake, faulty version of bitcoin and taking your fiat or, worse, your bitcoin in exchange for their token.

Built on bitcoin but has a shitcoin

Again I won’t name any direct people or projects because I don’t want to give them any publicity, but if you do hear the term “built on bitcoin,” but we have our own token to run the service, run the other way.

They are co-opting the bitcoin brand and getting people to conflate their project with scaling solutions.

In some cases, they use bitcoin to get you into their remora chain ecosystem and then offer all kinds of other tokens to trade and ways to earn higher returns by ditching your bitcoin for their high yield shitcoin.

Backed by bitcoin but has a shitcoin

The “backed by bitcoin” narrative has to be the most cringe of them all for me. It’s literally taking the obvious game and admitting to it and then using it to sell people more of your shitcoin. You see, shitcoins were always meant to try to divert capital from bitcoin into these walled gardens, so retail end up with useless digital tokens while the founders use that capital to acquire more bitcoin.

The shitcoins of previous cycles had a little more class, relatively speaking, compared to these new projects. The previous cycle scams would at least lie to you by telling you their token was better than bitcoin, would compete with bitcoin, would kill bitcoin, and when you bought it, they would keep the bitcoin you gave them.

Instead of keeping up the lie that you will outcompete bitcoin on users and value despite the obvious devaluation year on year in satoshi value. Shitcoin scams are now flipping the narrative and claiming that by buying bitcoin themselves, they can backstop their project.

So they buy bitcoin, but you should buy their shitcoin, do as we say, not as we do sort of thing.

In the end, pigs get slaughtered

If you’ve come this far you’ll realise that while some of these are not blatant scams, but sure do have incentive structures that aren’t exactly above board, and requires you to take way too much risk and offer you all kinds of crazy returns to get you to overlook those risks.

We can debate if it’s a product or a long game scam, but I still side with the maxi view, but I am sympathetic to those who don’t hold the same beliefs. In the end, it can be a scam or a naive founder with a gross miscalculation; the result for you as a bag holder will be the same.

South African bitcoin pleb falling down the rabbit hole and willing to share every bump, scratch and knock along the way
View more articles from this author
PrevPreviousWhat Is Eltoo?
NextLightning Labs Adds Multi-Asset Support To LND With TaroNext