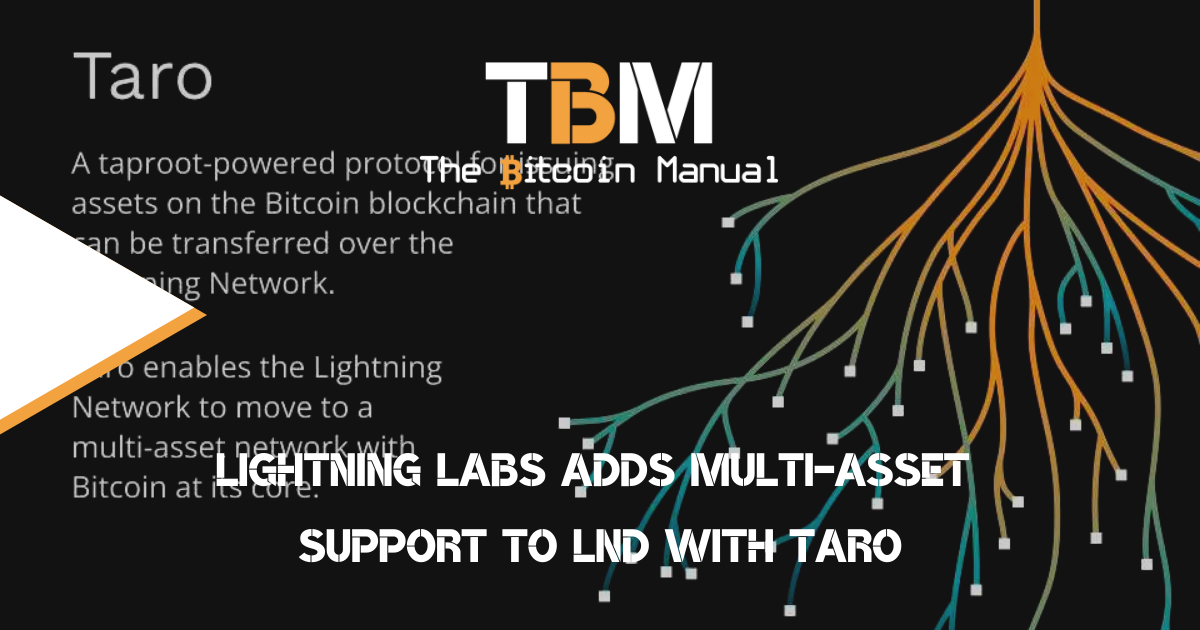 The race to add stablecoin support to the Lightning Network continues on multiple fronts. We’ve seen proposals such as CFD backed stable values, porting Liquid Assets from the Liquid Network to Core Lightning, Omnibolt used to move Omni-assets on Lightning and the proposal of using balanced channels with the help of DLCs. Each method has its pros and cons and will appeal to different audiences; it will be up to wallet creators to pick one or several options they feel would be beneficial to their users.

The more options, the less centralisation around one implementation and today, a new contender enters the ring with Taro by Lightning Labs. Taro is a new Taproot-powered protocol for issuing assets on the bitcoin blockchain with the intent of transferring them via the Lightning Network to leverage the instant, high volume, low fee transactions.

This announcement marks the first time the LND implementation will be a push towards a multi-asset Lightning Network. The goal of Taro is to allow multiple stablecoin implementations for local currencies and route them through bitcoin liquidity on the network.

Taro uses the Taproot scripting behaviour to allow developers to embed arbitrary asset metadata within an existing output. That means no additional burden on full nodes, no burning of bitcoin via the OP_Return opcode, and that Taro assets inherit all the same double-spend protection of normal bitcoin transfers, along with additional functionality like transferability over the existing Lightning Network.

Because the Lightning Network is a payment channel network, it has faster settlement and lower fees than other blockchains and retains those properties as the network scales.

Taro relies on Taproot (added to bitcoin as of the soft fork last November), bitcoin’s most recent upgrade, for a new tree structure that allows developers to embed arbitrary asset metadata within an existing output. It uses Schnorr signatures for improved simplicity and scalability and, importantly, works with multi-hop transactions over Lightning.

Lightning Labs has released a series of Taro Bitcoin Improvement Proposals (BIPs) for feedback and comment from the developer community. If you want to learn more about it or provide feedback, you can read through the full Taro specification on Github.

How does a Taro transfer over Lightning work?

This structure taps into the network effects and liquidity of the Lightning Network to route any number of assets, avoiding the need to bootstrap an entirely new network for every asset you want to establish and transfer.

While users are freely transferring assets they value in mediums, they understand it’s all run on Lightning, and the value is underpinned by bitcoin on all transactions across the network. The need for value to back these assets also incentivizes the growth of BTC liquidity within the Lightning Network to serve a broader multi-asset Lightning Network.

Example of a Taro transfer

Taro interoperates with the existing BTC-only Lightning Network as-is, only requiring the first hop and the second-to-last hop to have L-USD liquidity.

Note: Please note that the L-Assets mentioned here are not to be confused with Liquid Network assets like L-USDT and L-BTC.

Possible benefits to the overall network

Taro enables bitcoin to serve as a protocol of value by allowing app developers to integrate assets alongside BTC in apps both on-chain and over Lightning.

This expands the reach of Lightning Network as a whole, bringing more users to the network who will drive more volume and liquidity in bitcoin and allow people to transfer fiat for bitcoin in their apps quickly.

The idea is with more transfers, more value held in bitcoin liquidity on the back end will drive more network volume means more routing fees for node operators. Encouraging more operators to come online who will see the benefits of a multi-asset Lightning Network without needing to support any additional assets.

Bringing stablecoins to bitcoin via the Lightning Network is good for users who want access to financial services, good for app developers who want new tools, good for routing node operators who want more fees, and good for issuers who want a better experience for their users.

How to get started with Taro

Taro backed assets are still a while away from use in production environments, but the foundation is set with the release of the draft protocol and its underlying components in a series of BIPs. Once feedback from the community at large has been factored in, these BIPs will be adjusted accordingly, then approved or rejected.

The second step would be to build the tooling that allows developers to issue and transfer arbitrary assets on-chain. Once wallet providers and node software have made it easier to communicate with the Taro protocol, it will move to user testing.

The final step is to build functionality into Lightning that allows developers to open channels with Taro assets that can be sent over the existing Lightning Network.

South African bitcoin pleb falling down the rabbit hole and willing to share every bump, scratch and knock along the way
View more articles from this author
PrevPreviousWhat Is A Bitcoin Affinity Scam?
NextWhat Is Bitcoin Dust?Next