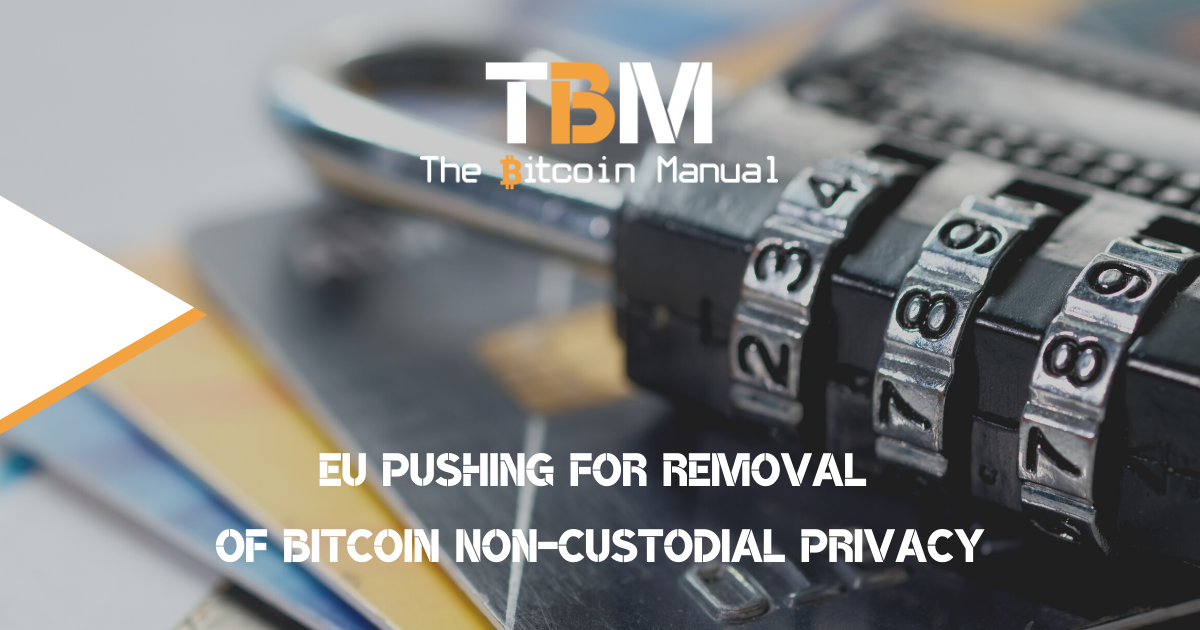 European Union lawmakers are back at it again; after the failed vote to get proof of work banned in the region, they are determined to get some regulation over on bitcoin. Instead of going for the industrial part of bitcoin, which creates jobs and is an energy buyer on the continent, they are now targetting individual bitcoin users.

The EU now wants stricter traceability rules for transfers of Bitcoin in a move the many bitcoin proponents and industry critics claim these new regulations would erode privacy, hinder innovation and expose users to a higher risk of theft.

The draft legislation regarding bitcoin is part of a broader fight against money laundering and financial crime. Still, it is a measure to control the inflows and outflows of capital into bitcoin. The EU realised they are between a rock and a hard place financially, and having exchanges open to the public where they can take custody of their bitcoin, could be an avenue for a bank run.

We’ve already seen comments in the past by the head of the ECB, Christine Lagarde, saying if they allow for escape hatches out of the Euro, people will use them.

Financial repression rising in the EU

Under the proposal, the EU would require exchanges and bitcoin-related businesses to collect and share data on transactions in a business that has so far thrived on its anonymity.

As bitcoin hovers below the trillion-dollar market cap, it still clears billions each day in transactions, and this is concerning to the ECB as more people start to own and mine the asset.

The bitcoin sector is still subject to patchy regulation across the world, and they have concern that Bitcoin and its peers could upset financial stability. While it can also be used for criminal purposes and, more importantly, avoiding sanctions, it has seen the EU accelerate work by policymakers to bring the sector to heel. It’s the same old FUD they’ve been pushing for years every time they want to restrict people’s access to bitcoin.

Bitcoin custody under threat in Europe

Under the proposal, first put forward last year by the European Commission, bitcoin firms such as exchanges would HAVE to obtain, hold, and submit information on those involved in transfers both inside and outside to non-custodial wallets or as they like to refer to it as “unhosted wallets”.

Exchanges would have to document these whitelisted addresses for non-custodial use and tie them to user IDs, so funds have to be pushed to that same address leaving less privacy on the blockchain, and your holdings would be completely doxxed from that exchange on the chain.

This information would have to be made available to the competent authorities.

Having this information would make it easier to identify and report suspicious transactions, freeze digital assets if they do hit participating exchanges, and discourage high-risk transactions.

Additionally, keeping track of addresses with consolidated balances makes it easier to track who would trigger taxable events, lay heavier levies on these people as well as limit tax evasion.

The Commission has also proposed applying the traceability rule to transfers worth €1,000 or more, but under the cross-party parliamentary agreement, all transfers would be in scope, meaning it wouldn’t matter the value of your bitcoin holdings; they need to be reported.

Passing on costs to customers

Whenever you lay more intense regulation on companies, it requires them to add more lays of complexity to the back office processes, hire more staff, increase security and add more costs to remain compliant. Those costs are not going to be absorbed they the company but passed on to the consumer.

It would make EU exchanges far less competitive as they need to increase trading fees, deposit or withdraw fees to cover the extra expenses. So you’re telling your customers they need to pay for rules they don’t want to be enforced on them.

As I mentioned, there will be an added expense on the books for bitcoin companies, and those with fewer resources will have to consider if they can remain in operation.

They would either have to refuse users the option of self custody so as not to deal with the regulatory and compliance headaches or link up with competitors to allow people to withdraw funds through bigger exchanges. Often times this would simply result in acquisitions and create monopolies in the market.

This, in turn, would cripple their competitiveness, and European users would turn towards foreign providers instead.

Apart from these very evident and dangerous consequences, these rules would also add a higher barrier to entry for people, not only in cost but in operations. This is detrimental to financial freedom & inclusion and has an impact on the choice of self-sovereignty of the asset as you make it harder to self-custody bitcoin.

The data collection and reporting burden will create massive personal data honeypots, both within private bitcoin companies & government agencies. Make no mistake, the larger the database, the more attractive it becomes to break into and acquire the information. No matter the security precautions, these data pots will be too valuable to not get hacked at some point.

That would result in your personal data from KYC (name, home address etc.) being linked to your public blockchain addresses and your entire on-chain transaction history.

Criminals would see exactly how much bitcoin you own and could start attacks both virtually (hacking, phishing etc.) and physical attacks such as robbery, kidnapping etc.), putting citizens in danger.

Exchange hacks are nothing new, be they external or internal attacks, and when you’re placing businesses under restrictive legislation and limiting users’ ability to self custody, you create a massive single point of failure. If these exchanges are hacked, go down; you’re limiting people’s ability to hedge against those custodial third party risks.

What can EU Bitcoiners do?

If you happen to get caught in the crossfire of these regulations as an EU citizen, it may be time to call it quits when using centralised exchanges unless you’re willing to risk doxing your entire stack. You can still secure some of these walled garden bitcoin, but be sure to have some that have already been taken into a non-custodial wallet that has no identity ties to you.

Next, you may want to acquire non-KYC bitcoin from now on; it may be slightly more complex and painful, but the benefits are well worth it when you’re being monitored and when these rules can become even more restrictive as time goes by such as a 6102 order.

Alternatively, you may want to pick up and move to a non-EU country or simply have someone set up accounts in another country for you to stack non-custodial and KYC free.

South African bitcoin pleb falling down the rabbit hole and willing to share every bump, scratch and knock along the way
View more articles from this author
PrevPreviousBitcoin Gaming: Wheel of Crypto
NextWhat Is A Bitcoin Improvement Proposal (BIP)Next