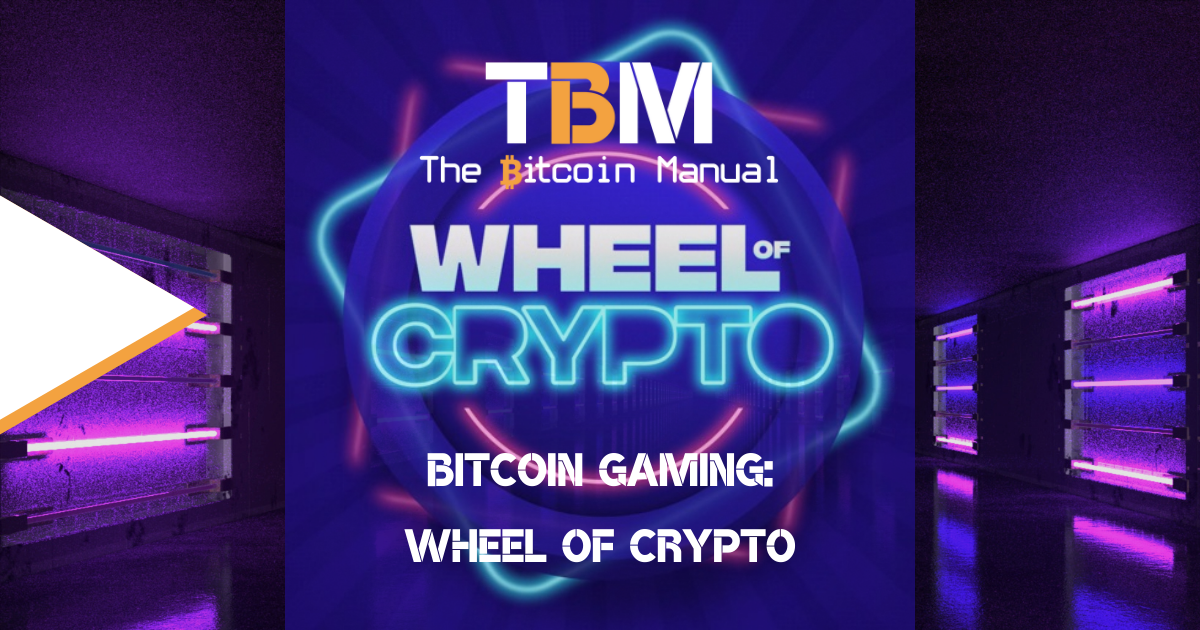 Ever since the lightning network first came on to the scene in a draft paper in 2016, it’s opened the door for faster, smaller and low fee Bitcoin transactions compared to just using Bitcoin’s mainchain.

With that potential slowly but surely beginning to be recognised, we’ve been witnessing the development of several Bitcoin apps by companies that have integrated the lightning network to help plebs like you and I stack sats!

One such application is gaming, a market that is ripe for tapping into, especially with around 3 billion of us apparently owning a smart phone.

The Bitcoin gaming wheel really does keep on turning with so many options for you mobile and PC gamers to get your hands on some sats now.

At this point, you should be asking yourself why you’re still playing those non-Bitcoin games!

Speaking of wheels, that’s what we’ll be talking about today as Viker Games have actually re-invented the wheel by adding Bitcoin to theirs with Wheel of Crypto.

Viker and Zebedee have been on a roll (see what I did there) since they started collaborating in October 2021 as they look to bring Bitcoin to the masses one game at a time.

Viker are a London based start-up gaming company founded in 2017 that aims to create fun games to earn some sats with. Their team has had experience with some of the gaming giants out there, according to their website, so there’s plenty to look forward to.

Zebedee have helped integrate Bitcoin into many mobile games, now adding Wheel of Crypto to their own Bitcoin gaming app.

What Is Wheel of Crypto?

Now, I know that many a Bitcoin maxi will wince at the “c” word being flashed around here but rest assured, this game is all about sats (at the time of writing), otherwise I certainly wouldn’t post about it on The Bitcoin Manual!

The premise is very similar to that of Wheel of Trivia which I covered recently in that, quite simply, you just need to answer questions correctly to have a random chance to win some sats.

In order to get some questions so you can answer them, you need to spin the wheel on the home screen by avoiding the skulls and landing on the pile of sats.

The different size of the piles of sats corresponds to different prizes – the bigger the pile, the larger the amount of sats you can win. However, you also need to answer more questions if you land on the bigger pile – it’s called proof of work for a reason I guess 😛

On the home screen, there are very few things to worry about which keeps things really simple – from top left to bottom:

I mean, there really isn’t much to the gameplay. You spin the wheel and hope you land on the piles of sats to answer questions!

However, I didn’t experience any real issues whilst playing this game. The wheel span without a hitch and was responsive when you tapped around. Also, getting extra spins by watching more ads was fine (other than having to watch an ad lol).

When you get a question wrong, there’s a chance to carry on by watching an advert and you start again where you left off.

Finally, cashing out was pretty straightforward as well and I received the sats in my Zebedee wallet straightaway.

Viker has backing from investment firms such as Initial Capital and Animoca Brands, who invest in start-up gaming companies and believe in what Viker are doing.

There are also in-game adverts that provide ad revenue and partnerships with Zebedee brings in further sponsorship and funding for future competitions.

These factors mean that they can provide sats in games at no cost to the players for the time being, whilst the companies look for other business models to remain sustainable.

How To Withdraw Sats From Wheel of Crypto

Firstly, you need to set-up your Zebedee app on your smartphone. After you have done this, you can withdraw sats by tapping your balance at the top right of the screen, which will show you something like the screenshot below:

Simply pop your Zebedee gamertag in to the box, press redeem and enjoy watching the animation as the sats roll in to your wallet!

My Thoughts On Wheel of Crypto

Despite that “c” word in the name of the game which could cause some Bitcoin maxis to rage, this sat-stacking game keeps it simple!

It feels like it’s the minimal version of Wheel of Trivia where you just simply spin the wheel and ask questions, without having to collect any additional items.

The quantity of adverts didn’t feel like it was too intrusive compared to other games and the questions were generally pretty easy to answer.

There were only a couple of questions in there that I was unsure of first time around but you see the same questions often enough that you can answer them correctly the next time you see them!

This game does pay out more sats than others I’ve posted about but if you combine this with Wheel of Trivia, you can probably get a few more sats if you don’t get bored answering the same questions and sitting through adverts.

Nonetheless, this game is good way to kill 5-10 minutes with a high sats-to-minute ratio which you can add to your Bitcoin gaming repertoire.

Unfortunately, the amount of sats you earn from this wheel won’t be enough to leave your day job but if it helps add to the stack, then why not go for a spin? 🙂

British bitcoin pleb falling down the rabbit hole and willing to share every bump, scratch and knock along the way
View more articles from this author
PrevPreviousWhat Is A Bitcoin Bounty?
NextEU Pushing For Removal Of Bitcoin Non-Custodial PrivacyNext