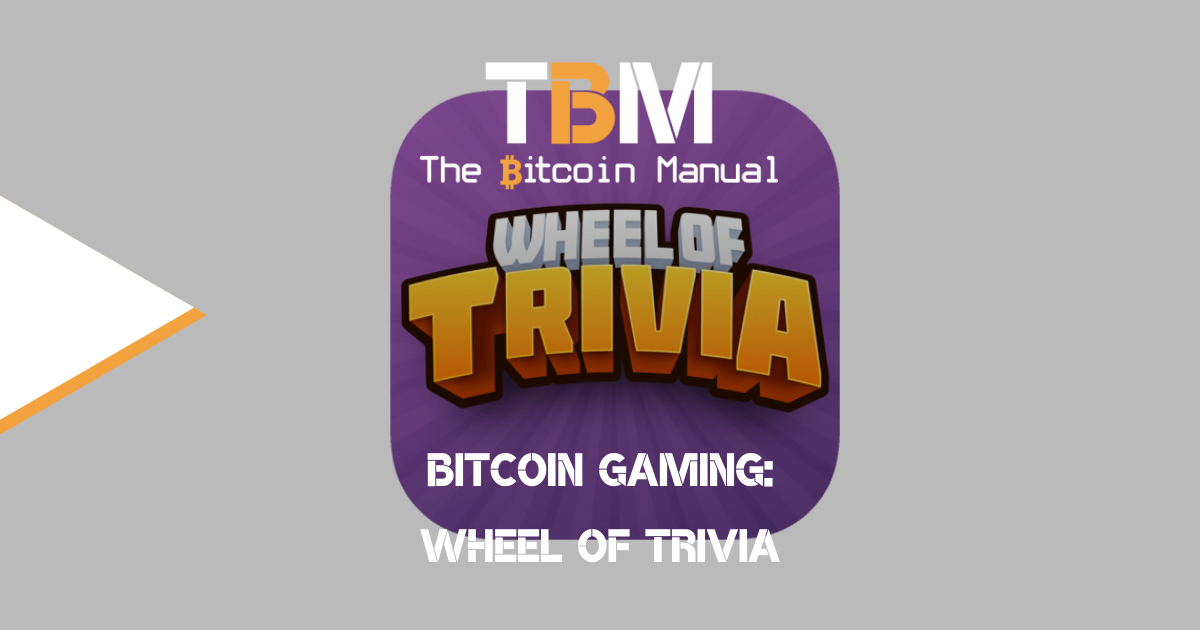 Quizzes, trivia, game shows, basically anything that requires some sort of general knowledge is not my strong point but I’m not one to shy away from the fun event of a pub quiz!

I only really shone bright in the science rounds of course and sucked at every other category so winning prizes would always be a challenge. As the saying goes, “it’s only easy if you know the answer”.

Well, what if the questions were a little easier and you had a better chance at winning some prizes? I’m sure we’d all be interested in something like that!

One of the many Bitcoin mobile games out there came on to my radar recently thanks to TBM’s Gabby, which merges these two facets and I thought I’d give it a try, anything for a few extra sats and a bit of fun!

These two Bitcoin gaming companies have been on a roll since combining forces in October 2021, with Viker Games having 6 games in their suite and more to come.

Zebedee have helped integrate Bitcoin in to many mobile games with their specialised Bitcoin wallet, of which Wheel of Trivia is another ribbon to their bow.

What Is Wheel of Trivia?

This is a trivia game on your smart phone where you answer questions for a chance to earn a random amount of sats. At the same time, when you answer a question correctly, you earn tickets that you build up and collect various items.

To get to the questions, you need to spin the wheel and see what item you land on before the questions appear. Then its a case of collecting a certain amount of tickets before that item appears in your collection.

Every day, there’s a chance to win more sats via the “Jackpot Wheel”

The home screen has a few options to explore, here’s what they are starting from top left to bottom right:

Although there doesn’t seem much to it, you’re just answering a couple of questions before the adverts kick in after all, the graphics still run relatively smoothly and the spinning wheel responds well most of the time.

I did experience some lag at the beginning of loading up the game which could be down to my own smartphone but once the app blows off the cobwebs, it operates well.

There are plenty of adverts in the game and these appear every 3 or 4 questions, sometimes even when you’re switching between menus on the home screen or when you need to get more spins.

As mentioned above, there are plenty of in-game adverts with some that you can’t skip through due to the ad revenue and rewards they provide. Add to that, the partnership with Zebedee helps with further sponsorship and funding for future competitions.

How To Withdraw Sats From Wheel of Trivia

You will need to have set-up your Zebedee app on your smartphone first but once you have done this, you can start withdrawing sats after you have reached the threshold (currently at 30 sats) by pressing your sats balance at the top right of the screen, which will then take you to something like the below.

All you need to do is type your Zebedee gamertag in the box, press redeem and your sats will be in your Zebedee wallet straightaway!

My Thoughts On Wheel of Trivia

The combination of earning sats through answering questions works really well and out of the games I’ve reviewed so far, Wheel of Trivia has given out a few more sats then other ones.

It’s an easy game to play and you can rack up sats if you get lucky with the drops but there is a caveat and that is the sheer volume of adverts in the game.

If you can live through adverts every 3-5 questions (which will take you about 10 seconds as the questions aren’t too difficult) or moving between menus, then you will be fine collecting a few more sats and have the patience of a demi-God!

I wasn’t too sure about the aspect of the collectible items as there were different levels to them which you acquired with more WT tickets but maybe these get upgraded as you go through the levels. Other than initially collecting them by answering questions, I didn’t know what else I could do.

Other than the number of adverts, if you have a spare 10-15 minutes then you can quickly add sats to your stash with this game but it will take a bit more than answering a few easy questions to quit your day job so don’t tender your resignation just yet!

British bitcoin pleb falling down the rabbit hole and willing to share every bump, scratch and knock along the way
View more articles from this author
PrevPreviousWhat Is LN-URL And How Does It Work?
NextWhy KYC Is A Danger To YouNext