Home » Articles » How Bitcoin Could Solve The Streaming Wars 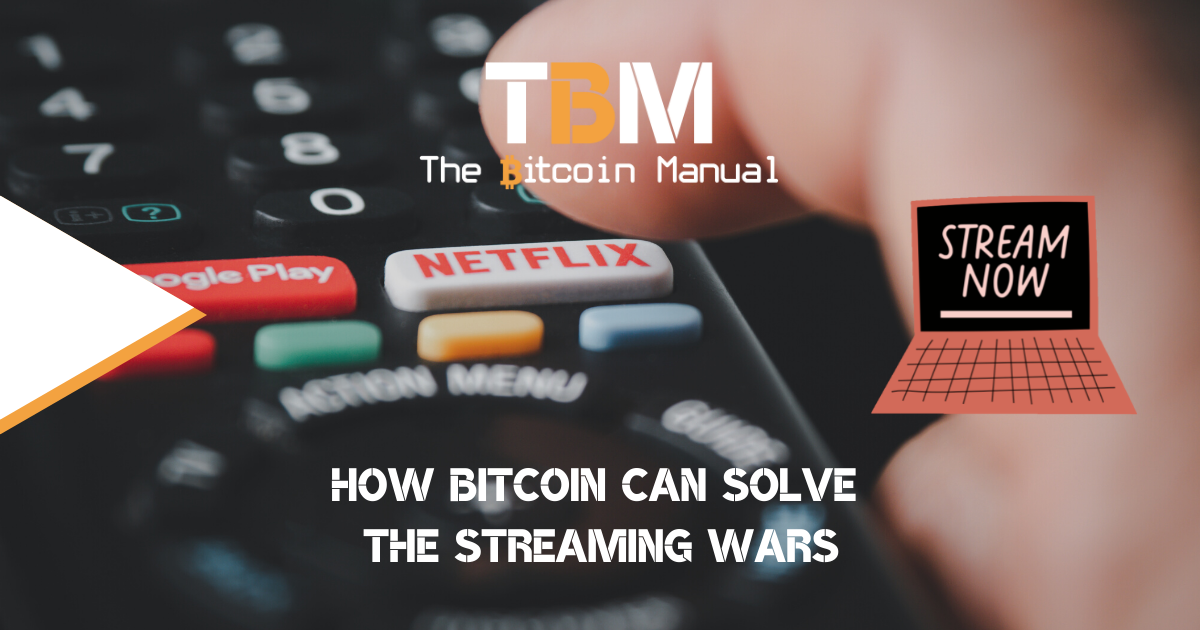 The internet has changed how we consume media; if you consider two to three decades ago, before high-speed bandwidth, if you wanted to watch a movie in the comfort of your home, you would need a VCR, BetaMax Player, DVD player or Blu-Ray player. Once you had the equipment to decode the information, you still had to go out and secure the IP by hiring or purchasing the movie on tape or CD.

Sure I have fun memories of heading to the video store in my PJs to pick out a movie for the weekend, and while those experiences ooze nostalgia, we can see that leaps in data transfer have made this practice a thing of the past.

Before the internet, distribution channels for media were well marshalled and controlled; very few of us had a viable choice outside acquiring media through local vendors or our TV broadcaster.

There were people on the fringes, who were able to download and share files, but this form of piracy was still limited by the amount of space on their computers or on the portable storage devices of the time. So publishers and media companies had a say in how media got to us and managed to pocket a larger percentage of the funds we through at media.

While some of us have fond memories of going to the movies, hiring movies, or checking the TV guide for when the first screening of a new movie would go ahead, the barrier to entry was too high for some consumers, and the market needed a way to reach more users.

Accessing media prior to streaming services was a pain; if you couldn’t, you’d be forced to seek out pirated content.

Then came Netflix, the service that allowed you to hire DVDs from the internet; not the most practical or revolutionary idea, but as internet bandwidth increased and cost decreased, they were in the right market at the right time to pivot to the dematerializing of media and boy did it pay off.

Instead of having to wait or to pay per content you wanted to watch, try to pirate a movie yourself, or get it from a friend, all you did was load up a website, and you had access to millions of hours of content. This was revolutionary in the expansion of media distribution, and it shows.

In all but a decade, Netflix road this wave and grew into a trillion-dollar company and household name.

How streaming came and went

As we saw Netflix grow into the behemoth it Is today, the success story of the company that took the risk on the internet as a medium of distribution moved from being an innovative idea to becoming an industry norm. Now every publisher wants to be its own streaming service.

Today we have streaming services in abundance, to name a few of the more popular ones,

As all these companies continued to chase the consumer base, they didn’t exactly grow the entire market and offer consumers more choice, but rather fragmented the market and gave customers less choice.

As these streaming services race to secure customers, we’ve seen IPs pulled from different services to become “exclusive content” while other IPs are purchased to keep them out of the hands of competitors.

Gone are the early days of Netflix, where you could get pretty much everything you wanted to watch for a subscription fee, now, you need one for every streaming service to have any decent catalogue of movies.

In a sense, streaming services are going backwards and putting up more barriers to entry than we are used to and adding cost and complexity to a process that is meant to become cheaper and simpler to use.

In a sense, streaming has been stifled.

As streaming services continue to try and cut one another down, reduce one another’s catalogues and fight over customers, many like myself have grown disillusioned and cancelled our subscriptions altogether. I can’t say that any of these streaming services provide value for money and as time goes by and these gated communities for content continue to put a choke hold on content, you’ll see more people side with my opinion.

Having all these barriers and costs to access content not only pushes people away but pushes them into the arms of piracy. Instead of having to buy subscriptions and switch between services, it’s now more viable to torrent the content you want or find a mirrored streaming site to watch ALL the content you want in one place.

Slap on the strongest ad blocker you can, and away you go.

So the idea of streaming services locking people into their ecosystem because they love a certain show only appeals to a certain set of people not willing or able to access pirate services. While this may work out, for now, that base of people can quickly erode and move towards piracy, especially if subscription fees increase and the quality and size of catalogues on streaming sites decrease.

When people pirate and share content, you’re losing viewers; they’ve already consumed the content so why would they pay to consume it a second time? What do you have to offer that they can’t get somewhere else? This is the dilemma streaming services face, and at the moment, it looks like the solution is to continue to bankroll these services until the ones that cannot access more capital call it quits and we see a mass consolidation.

A play on the value for value model

I’ve been playing around with the bitcoin value for value model for some time, listening to podcasts not only on apps like Fountain on my Smartphone but Podverse on my desktop. I can listen to my favourite podcast from either application and send the podcaster a comment with the same Lightning wallet. If I couldn’t find the podcast in their library, all I had to do was copy their direct RSS feed to that podcast, and it was available in my app with all the features set up for streaming sats or sending comments.

All this got me thinking, why couldn’t this model be added to streaming services too?

Couldn’t streaming services benefit from having monetized feeds on media and enable micro-payments? Let’s run through an example of how it could all work.

Let’s say I had a Netflix subscription, I pay my monthly fee to access the catalogue they have rights to, but I still want to watch something that’s out of their agreements.

I could have a Lightning wallet attached to my Netflix account and load it up with sats. These sats could be used to pay

That way, I don’t have to leave Netflix, I can use the app I paid for originally, making it convenient, and I am familiar with Netflix’s brand and user experience, yet I still get access to a wider range of content. I only pay for the content I consume, so if the movie or show is rubbish, I don’t feel like I was ripped off paying for the media because the moment I stop watching, my satoshis stop flowing to all who request payment for it.

Streaming services could then focus on improving their customer service, pricing and customer retention of users they’ve already acquired and set up agreements with one another to pay to access cross-platform feeds.

Using this model, you don’t destroy the incentive to create original exclusive content because fans of that content will remain with your platform for that premier access. However, you still get to use that content to reach users who are casual viewers and expand your reach as well as revenue.

Depending on the demand for a piece of content, streaming sites that have exclusive rights to it can set pay-per-view pricing and update it in real-time to attract users to watch their shows too.

Not only for the big boys

While my example above focuses mainly on the battle to silo content between streaming services and how bitcoin can be a bridge between these content kingdoms, it’s not the only application. This model could also give distribution to independent content creators.

An example would be popular YouTubers, who tend to Paywall content with a third-party service like Patreon; they need to dumb up enough attention on YouTube and then filter their viewers to Pateron, hope the user signs up for this secondary service and pays them for the content. This is a lot to ask for many who don’t want to pay to consume additional content.

If, however, a Netflix user like myself could connect Patreon or other service feeds into Netflix and pay these content creators directly, it would lower the barrier to entry. As a Netflix user, I now have access to a wider range of content creators, so the Netflix gallery of content increases, their watch time in-app increases, and they can earn from the split between streaming sats from my wallet to the content creator as a payment for their access to Netflix customers and their level of distribution.

This model could allow smaller creators access to a larger market and give indie creators the viewership they’ve been missing out on because distribution is so tied up by these streaming platforms and YouTube.

Bitcoin and its programmable nature, with the help of the Lightning Network, make it the perfect tool for microtransactions, paywall transactions and split payments, and that’s why I think it makes for the ideal monetisation platform to keep all publishers and streaming platforms happy while avoiding adding friction for customers and their user experience.

So do you think I am on to something? Could bitcoin put an end to all these walled gardens and usher in an era of open access to content? Let us know in the comments down below