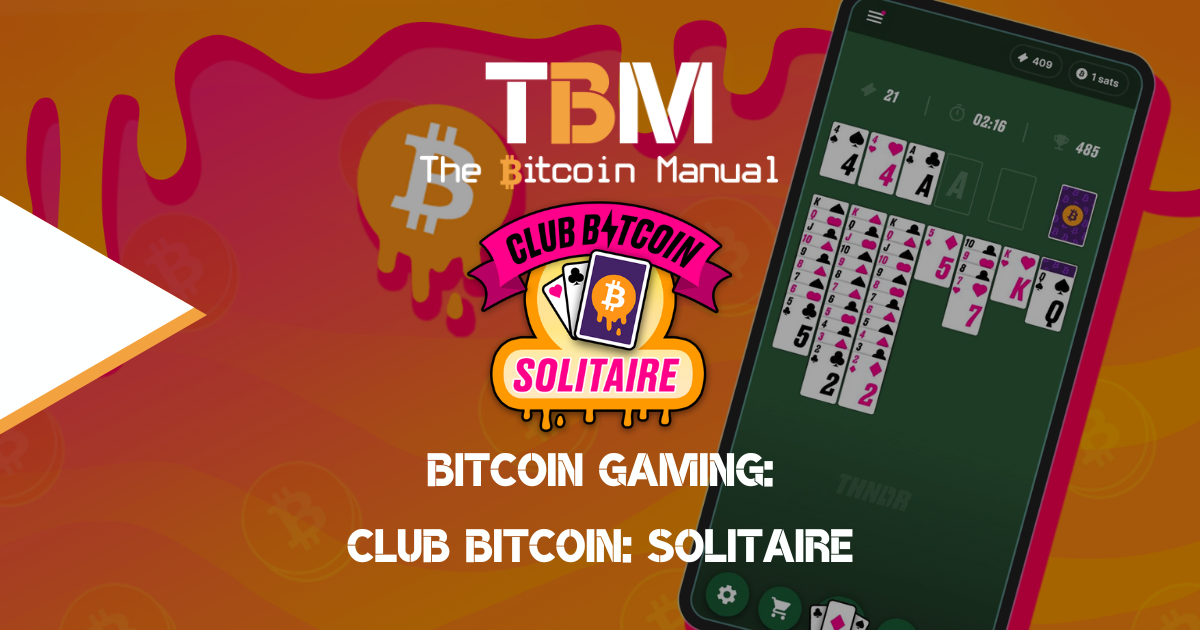 With so much convenience at our fingertips via our smartphones, there’s every temptation to procrastinate until the end of time.

Prior to smartphones though, the lonely person would kill time by whipping out their deck of cards and sharpen their mental skills.

Legend has it that in the late 1700s, those crazy Scandinavians invented something that many of us would later take for granted with a card game called Solitaire (or “Patience” or “Klondike” depending on where you’re from)!

As time and technology moved on, the modern day home computer was developed and we saw the first digital version of this game first appear on Windows 3 in 1990.

This also very likely coincided with a drop in productivity from office workers across the world with procrastination levels being in a steady bull market ever since.

Joking aside, Solitaire is still one of the most recognised card games going and a crack team of Bitcoin Gaming developers have been working on integrating Bitcoin into it.

TBM have had the honour of testing out the pre-release this last week, here’s what we make of it.

We’ve been following THNDR Games for a while here on TBM and have covered the suite of mobile games they’ve released thus far.

Founded in 2019, they are establishing themselves as a force to be reckoned with in the mobile gaming world, bringing their unique brand of addictive games and cool designs in all their offering.

Their previous game tugged on the nostalgia heartstrings with a Bitcoin version of the classic Snake Nokia game called Satsss.

THNDR Games aim to orange pill the world through the medium of mobile gaming with Club Bitcoin: Solitaire being their 5th release – here’s a heart-warming message about what THNDR Games is all about from THNDR’s meme magician Koty:

2019
That was the year THNDR started this mission: to introduce the world to Bitcoin. When a guy named Jack decided to mix a lightning node and mobile games to finally bring the most efficient way to add Bitcoin into videogames that could be available for anyone looking for the internet of money, for innovation; for the future [back then] that’s now our present. Tim was there in the process of coding the game, putting his energy and wit into it and the team expanded with Grzeg and Rafal.

Later, Desiree joined the team, a brave woman that previously worked with a group of people that brought to life the first implementation of the Lightning Network. She joined as the chief executive officer, to create a team and push harder what THNDR stands for in a world that’s going into probably uncertain and dark times due to the inflation caused by many outdated policies around the globe.

The team grew with the addition of our beloved Adam, Koty, Maja, and Stelios. Each of them putting their own strengths and ways to build something solid that aims to be a model for a sustainable way to incorporate real value into the virtual world, step by step; setting milestones.

But why and for who we build THNDR?

For the gamers that are looking for ways of getting Bitcoin into their lives. No matter if they are veterans in the field or newcomers that just heard of it from the crypto folks. We want to build something meaningful, something that shows new ways of doing stuff. Something that even brings hope.

We are about to release our 5th game, this is a huge deal for us and we wish that you enjoy it as much as we do. We welcome you to be part of this community of players that are looking for Bitcoin through games and found us in your way. Feel free to relax and enjoy with us some minutes of simple gameplay while collecting the pretty purple tickets. Feel free to say hi and joking around. Feel free to ask questions, to learn, to meme. This is your place to hangout and be sure that we will be bringing more in the future.

What Is Club Bitcoin: Solitaire?

Well, if you guessed that this is a game of Solitaire on your smartphone, give yourself a pat on the back because that’s what it is with added benefit of potentially earning Bitcoin!

As soon as you make the first move, the timer starts and your aim is to sort all the cards into their relative suit, going in ascending order starting from Ace through to King.

Every time you “free” a card up on to the main board, you get 10 points which contributes to your score and every time you manage to sort a card into its relevant suit, you earn THNDR’s trademark purple tickets.

These tickets then enter you into a daily prize draw to win fractions of a Bitcoin called satoshis!

However, if you need to recycle the cards on the top row then you lose 100 points so flip them wisely!

On the main screen above there are a variety of options, menus and statuses to view, starting from the top left to bottom right:

Every game I’ve played from THNDR Games has been smooth and even with the pre-release version I played on, this was no exception.

The modern design and slick interface provided instant feedback from tapping the cards, going through the menus, and withdrawing sats to a lightning wallet.

I liked the little animations that popped up to show the score and the tickets being added to your stash for the daily draw.

Also, you can just tap the card if there’s a valid move and it will go to its appropriate spot determined by the game, otherwise it will shake at you like an angry fist, “grrrrr”

The team had some feedback on additional features to add to the game and there will be challenges, time score and different skins making their way into future updates.

How Can THNDR Games Reward Users?

Yes, there are in-game adverts here, which help with funding the development of this and other games, along with in-app purchases from the store. As with all ads, they can be annoying, but I didn’t find these too obtrusive.

After every 2 or 3 rounds of Solitaire, an advert will pop up but if you really can’t stand them, you can get rid of them for a period of time by paying a small amount from their shop.

How To Withdraw Sats From Club Bitcoin: Solitaire

If you’ve been lucky enough to win some sats from the daily raffle, you have 5 days to claim them, otherwise it will go back to the pool – further information on the terms and conditions can be found in the app.

Here’s how you claim them:

Bear in mind, you aren’t going to get rich playing this but every sat helps in my view!

Once again, THNDR Games have smashed out a fresh take on a classic and I haven’t been able to put it down since I started playing.

I wasn’t that much into Solitaire before I was invited to the pre-release but to be honest, when you add Bitcoin into a game, it makes it exponentially better lol!

They have got everything spot on with this game from the animations, the responsiveness, and the speed as well. You can get a quick game done in a matter of minutes, knowing that you’ve picked up some tickets for a chance to win some sats whilst killing a bit of time.

As Des, the CEO of THNDR Games, said when she reached out to me, “this game is going to be a very important one to reach the demographics that need Bitcoin the most”.

I couldn’t agree more – everyone knows Solitaire and THNDR’s upgrade to it will be a great way to introduce many to Bitcoin.

It may not earn you enough to quit the day job, particularly in this current climate as Koty mentioned earlier, but every sat helps so why not have some fun playing Bitcoin games in the process?

To download Club Bitcoin: Solitaire, head over to THNDR website and join the community on their Discord/Telegram via the links below:

British bitcoin pleb falling down the rabbit hole and willing to share every bump, scratch and knock along the way
View more articles from this author
PrevPreviousBitcoin App: Liquid Taxi
NextHow Bitcoin Could Solve The Streaming WarsNext