Home » Articles » What Is A Bitcoin Mining Capitulation? 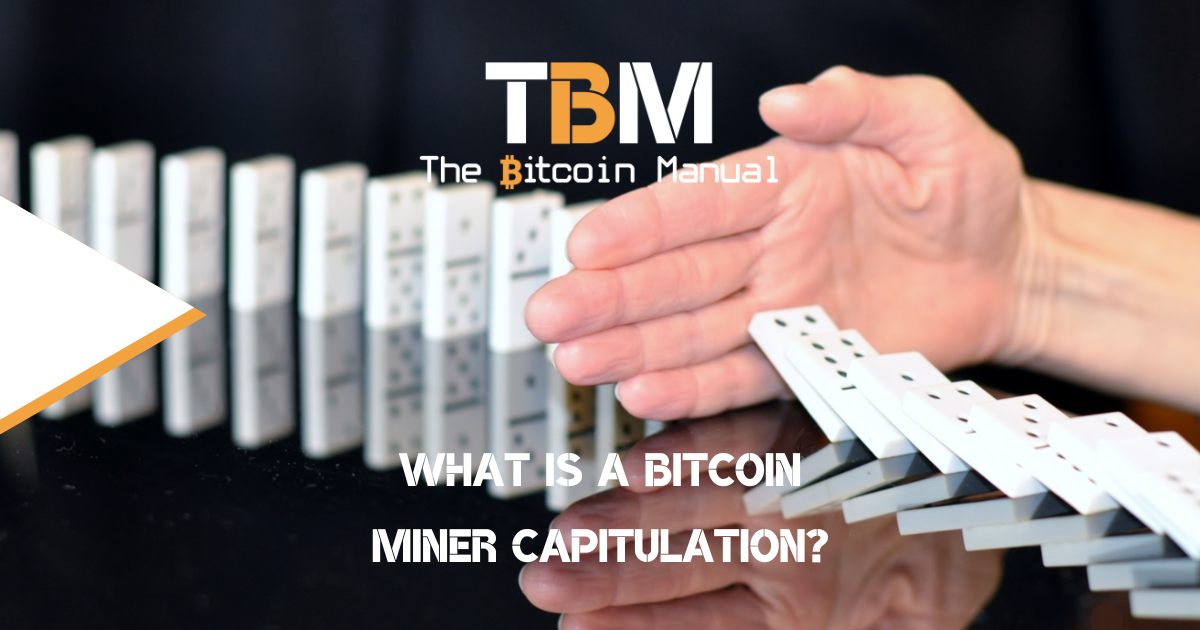 Bitcoin mining is not some passive investment opportunity where you can print money using fancy computer equipment; it’s a cutthroat industry where individuals and companies compete to secure the next block. Bitcoin mining has elements you can control, such as the type of machine you’re using, your expenditure cost basis and the software you’re running, but much of it relies on the luck of the draw.

Add to the fact that bitcoin’s highly volatile price adds another unknown to your economic calculations. If the price swings in your favour, you can secure a healthy profit and some runway to operate into the future. However, if the price swings against you, it can leave you with less than a stellar income and can drag you down with it.

In times of uncertainty and price depression, there might be some miners that can operate for lengths unprofitably, while others might not have the luxury and be forced to give up the good fight.

Some capitulations can be mild as a steady stream of players leave the market and are replaced by others. In contrast, other corrections can be brutal, with fluctuations in mining profitability purging the network from unprofitable operations and a mass exodus of weak miners unable to bear the volatility.

What is miner capitulation?

In Bitcoin, profitability for miners is a function of the bitcoin price and the cost for the miner to acquire electricity. When the price drops, less efficient miners are forced off the network because the bitcoin they earn is less than the cost to mine. A miner can either choose to run at a loss for certain periods hoping for a price correction to recover those losses, or choose to slow down or pause operations.

It becomes a game of cash flow, and who can run as lean as possible? Many miners keep some or all of the bitcoins they mine to sell them in a bull market and get maximum value for them. The thinking in a “miner capitulation” scenario is that as the price drops and some miners are forced off the network, they will sell these reserve bitcoins, causing the price to drop further.

As miners leave the ecosystem, eventually, the miners that can remain profitable at the lowest cost basis stick around and grab more of the rewards, and the network adjusts according to the available hash rate.

In a worst-case scenario, the selling could continue and cause a “death spiral” in the price of bitcoin as you have continuous selling pressure on the price of bitcoin. This long-term sell pressure could result in a cascading effect wherein the lower price takes out more and more efficient mining operations.

Criticisms of the miner capitulation theory

First, this death spiral has never occurred, despite many historical examples of the price of Bitcoin shedding more than 50% of its value in a matter of weeks. The reason for this outcome is simple: Healthy mining operations have significant funding sources that allow them to weather the hard times and continue mining.

They also negotiate long-term contracts with power companies to keep their energy prices low and predictable. Both of these allow miners to keep their bitcoins in reserve so that they don’t have to sell in a bear market to keep their operation going.

Small-scale and home miners who might have sat out previously would be incentivised to turn on should there be an opportunity to compete.

Why do miners capitulate?

Bitcoin mining is a business; it’s the business of securing the network, keeping blocks going and extending the chain and receiving payment for your service. Since bitcoin is an open network, anyone can compete if they choose to, and with this competition, someone has to end up at the bottom of the pile.

There are many reasons why miners might call it quits, as they compete with one another, and the most popular reasons for closing down your shop are:

Bitcoin miners are remarkably robust devices and can last for many years, but that doesn’t mean they can compete with the improved machines. Each year new machines are released, and each year, the improvements become marginally better.

Newer machines can produce considerably higher hash rates for less electricity than their predecessors, so we will likely see hash rates continue to rise. As the hash rate rises, it makes it far harder to secure a block with your device and eventually, you have to call it quits.

Electricity costs are too high

This one is fairly straightforward, in bitcoin mining, electricity will be your highest cost; if you cannot secure low electricity or co-locate with energy sources that provide you with a sweetheart deal. You simply won’t be able to compete with these miners as they can run for longer and produce more hash rate for less money. As bitcoin becomes harder to mine, those with the most expensive energy costs are forced to turn it off.

Bitcoin mining doesn’t only require electricity, especially if you’re doing it on a large scale. You need warehousing, property, staff, technicians, and spare parts, to name a few. As you compete with other miners, these costs need to be kept down to allow you to pay for electricity, and you don’t operational costs can eat into your profits, and you might have to give up the dream.

Certain private and public miners raise debt to start and run their operations. If the bitcoin price drops to a point where you cannot service your debt and pay for electricity and operational costs, something has got to give. You can either speak to your creditors to refinance or try to secure more debt to cover these challenging times.

If your creditors are unwilling to play ball, you will have to shut down and hand over the keys.

When more miners come online, they point more hash rate at the network, and for a moment, they might be able to secure a premium, but this only lasts for a short time as the bitcoin network aims to adjust based on the new hash rate. This adjustment is known as the difficulty adjustment, which makes it harder or easier to secure a block depending on the competition.

If the difficulty adjustment keeps getting harder and cuts down how much you can earn, and the price doesn’t increase to compensate, then you’re going to be falling short on income, and if that carries on long enough, you won’t be in business for very long.

During a bitcoin miner capitulation, we often experience a massive sell-off in bitcoin as mining operations look to settle debts and cover expenses. This is obviously a negative outcome for the miner in question, and while brutal, it encourages creative destruction.

These capitulations in mining purge the network from unprofitable operations and weak miners unable to bear the volatility. In the event of a massive capitulation, we see a sell-off in bitcoin, and bitcoiners get to pick up bitcoin on the cheap.

Additionally, we see the redistribution of bitcoin mining hardware through firesales, with individuals and businesses buying up cheap ASICS and moving them to regions where they are profitable to use. When the market stabilises, the Bitcoin network will be left standing on the shoulders of the most resilient and most profitable miners — strengthening it for future cycles and volatility.

South African bitcoin pleb falling down the rabbit hole and willing to share every bump, scratch and knock along the way
View more articles from this author
PrevPreviousHow To Open A Bitcoin Lightning Channel?
NextBitcoin App: Lightning LoopNext