Does The Bitcoin Price Matter? 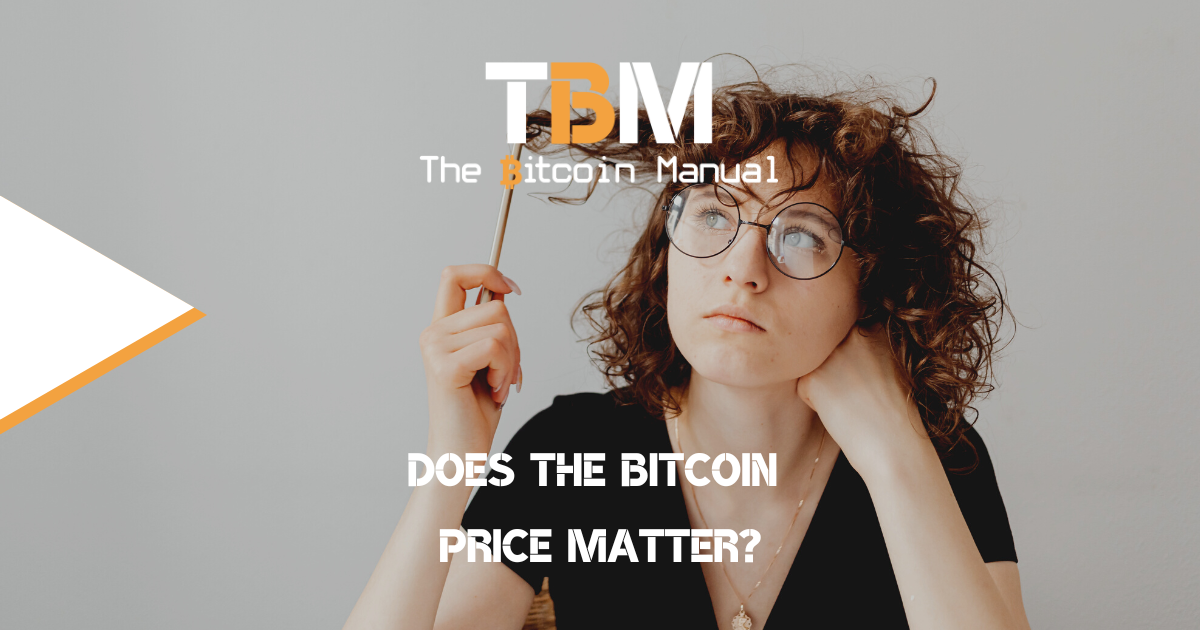 The more I learn about bitcoin, the less I seem to care about the price of bitcoin, which seems strange since it’s the first thing that lures us into paying attention to it. In the beginning, I spent so much time focusing on the fiat price, is it going up or is it going down; it would affect my emotions, and I would find myself cheerleading rallies, as does every beginner bicoiner. The price is only scraping the surface.

I followed the standard bitcoin process; I saw the price running up during one cycle, got in, made some paper wealth, lost it all and took the next four years to learn all about it.

As they say, come to get wrecked; stay for the tech.

And stay I did, some of my mates moved on to altcoins or gave up on bitcoin to live normie lives, but me, I doubled down; I wanted to know what this thing is all about, why it works the way it does, and I was hooked. My learning journey continues today, and every day, I learn how little I know about bitcoin.

The little I do know I freely share here, to get told I don’t know anything about bitcoin, lol.

Today the price seems like the least interesting thing about bitcoin, and provides more noise than real signal for me.

Now I am wondering, does the price really matter?

Bitcoin price is a secondary market

The secondary markets that exchanges and P2P networks have set up to trade bitcoin for fiat are simply on-ramps that settle with bitcoin on one end of the transaction. These secondary markets don’t abide by the rules of bitcoin, and as these markets have a constant on the one end in bitcoin, the volatility is reflected on the other end, in fiat.

Spotting the signal between the noise

When I first got into bitcoin I never really considered bitcoin’s native accounting units of satoshis, all I cared about was the value in relation to fiat currency but as I kept watching it, I came to some conclusions.

Since I am based in South Africa, my bitcoin purchases would be done in South African Rands (If I had any 🧐. If I purchased bitcoin with Rands, the price could be the same as yesterday, but I could get a different amount of satoshis, and that to me seemed very weird.

In this example, it was the price of the Rand vs the Dollar that changed at the time, providing the difference, and that’s when I realised all the noise that I was focusing on.

So I thought to myself, why concern yourself with all these moving targets doing your head in and only focus on bitcoin metrics since it’s knowable and verifiable via my node.

If I simply stick to bitcoins metrics, I actually have a self-referential system that can provide me with a measuring stick for me to measure all the things I would need and if my time is saved accordingly.

If I have a certain amount of sats and after a year, we look at their performance:

So if my goal is to stack satoshis for the long term, does the price really matter that much? Not really sure I want to get as many satoshis as I can, but that shouldn’t be down to my timing of the market but rather down to my ability to produce value that I can receive payment and convert into bitcoin.

Now instead of the price being a determining factor, it’s more a case of how do I monetise more of my time and labour into more bitcoin.

Who does care about the bitcoin price?

Now that doesn’t mean I completely don’t care about the price. I have no in some regard. Since I earn in fiat, if bitcoin is going down in fiat terms and I can scoop up more satoshis for my local currency, that is advantageous to me.

But that’s not the only reason why the price matters; for other participants, it matters.

It matters to speculators

If you’re trading bitcoin, either to make more fiat or to make more bitcoin, then the price surely matters to you. You’re looking to find points in the market where you can exit and pocket a profit. Every retail trader who gets into the space thinks they’re going to crack it big trading with their disposable income, some people do make the odd killing, and we sure do hear about those stories because it encourages speculation.

Yet the truth is, most click traders will get creamed by algo-trading desks and market makers who put their money into a trade, get retail to follow and as retail floods in, they take their money out and the retail trader’s money.

Trading does provide deep and liquid markets, which we need to allow more people to get into bitcoin and out when they need to, but it isn’t the retailer’s playground you think it is; like any trade, there are professionals in the space, and they’re looking to pick you off.

It matters to miners

If there aren’t enough fiat miners and speculators coming in to provide fiat liquidity in the region the miner is in, then it becomes harder for them to acquire fiat to pay their bills and maintain their operations.

The price of bitcoin increasing to keep pace with the input cost to mine one is important, and the margin for profit is important for miners who want to scale up operations or create cash buffers for the future where they would need to sell less of their bitcoin as they have more of a fiat runway.

So in this sense, the price of bitcoin matters.

It matters to those on leverage

If you’re taking out bitcoin-backed loans, if you’re borrowing bitcoin to trade, you’re going to have to care about the price. If you don’t keep tabs on the price and pick the right margin for error, you could end up being liquidated and losing your entire position.

If your goal is to maintain your bitcoin position long-term, then taking out leverage to trade, or to earn on a yield platform, may not be the best use of your funds. If your leverage is to fund a cash-generating asset, it could be worth it as you could kick off those free cash flows towards your loan and hopefully unlock your collateral sooner rather than later and avoid any potential liquidations.

Liquidations can be painful for those who are on the hook, but it is always a great time for long-term hodlers who can pick up that market dump and average down their positions.

Trading bitcoin and chasing returns sound glamorous, but to me, that is such fiat culture that I don’t want to associate with anymore. All I care about is do I have more savings than I did yesterday and if I can still maintain my ability to save in the future.

That’s it, that’s all, it’s not sexy, it’s not charting, and picking price points and hoping to Lambo, I couldn’t care less about those things. To me, that’s all more work, work I am not willing to do; I already worked for the money, and now all I want to do is store it somewhere I can tap into again without issue.

Trying to trade bitcoin means caring way too much about the price, and I have a day job to maintain.

In most cases, I’d lose money trying to play a game I am not equipped to play, and It’s better to leave the ape games to the fund managers and speculators and stack sats for the long run. Remember, they’re not making many more of these bitcoin, so you might not only lose your current bitcoin position today, but future purchasing power you could have tapped into had you only held on to that bitcoin.

Does the price matter to you?

So that’s my thinking on the bitcoin price today; maybe it’s copium, maybe I’ve reached a new level in my bitcoin journey; only time will tell. So how do you see the bitcoin price? Is it important to you? Why or why not? Let us know in the comments.

South African bitcoin pleb falling down the rabbit hole and willing to share every bump, scratch and knock along the way
View more articles from this author
PrevPreviousWhy Do People Hate Bitcoin?
NextHow To Delete Your Vauld AccountNext