What Is A Forced Liquidation In Bitcoin?

Home » Articles » What Is A Forced Liquidation In Bitcoin? 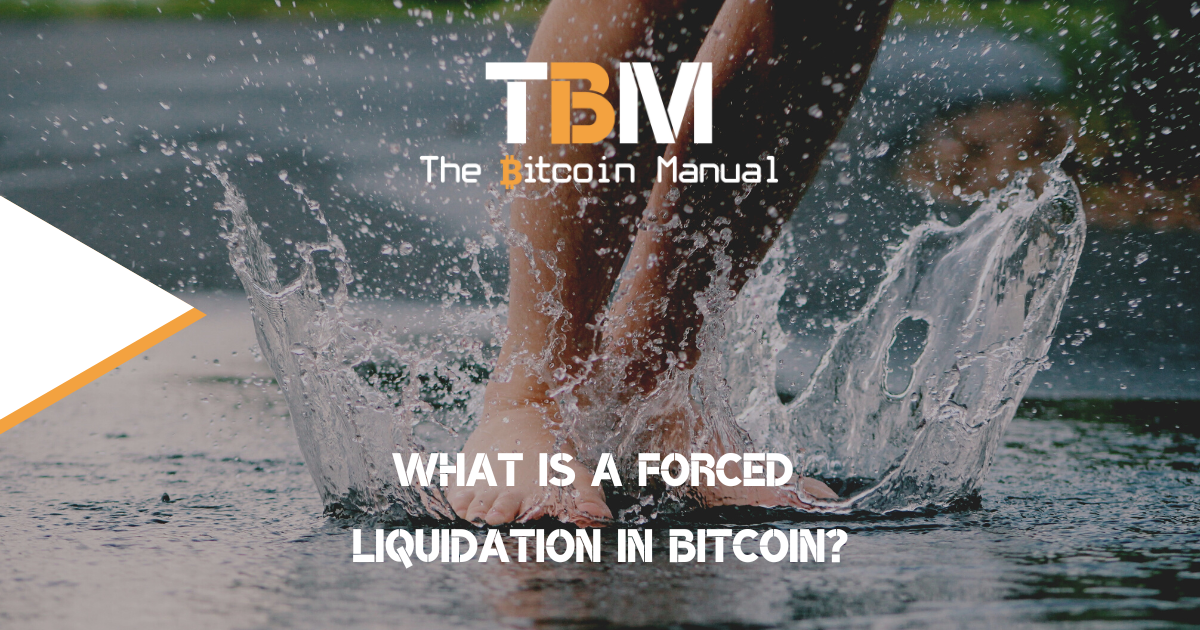 The bitcoin market has taken quite the tumble in the last few months, we’ve seen cascading losses and massive sell-offs as the bear market takes hold. When bitcoin markets are volatile, you’ll tend to hear a lot of the blame placed on leveraged traders who were “liquidated” in many of the financial news site headlines. The term is used to refer to an event that occurs when traders who borrowed money to place a trade cannot margin requirements for their leveraged position.

Given the amount of value bitcoin assets lost in the past few months, liquidations were bound to happen, not only in the case of retail traders but large firms can also be forcefully liquidated, and when large players are liquidated the market cannot often handle that amount of selling pressure and prices can be suppressed or see a sharp decline as those coins hit the market.

Liquidation refers to the activity of selling off bitcoin for fiat or stablecoins to mitigate losses in the event of a market crash. In the bitcoin world, the term liquidation is mainly used to describe the forced closing of a trader’s position due to the partial or total loss of the trader’s initial margin. This happens when investors do not have sufficient funds to keep the trade open.

What is bitcoin margin trading?

Bitcoin margin trading is the process of borrowing money (typically from cryptocurrency exchanges) to trade a higher volume of assets. This method can provide the trader with increased buying power (or leverage) and the potential for greater profits but if the trade goes against you or you don’t have sufficient capital to ride out certain price movements, leveraged trading can blow up your entire account.

The term “liquidation” simply means converting assets to cash. Forced liquidation in bitcoin trading refers to an involuntary conversion of bitcoin assets into cash or cash equivalents (such as stablecoins). Forced liquidation occurs when a trader fails to meet the margin requirement set for a leveraged position. When this condition is met, the exchange sells the trader’s assets automatically to cover their positions.

A trader can decide to cash out a bitcoin trade for various reasons.

Another key difference is that in a forced liquidation, all positions are closed at the same time, while in voluntary liquidation, they can be closed gradually.

A forced liquidation protects traders from incurring any additional losses. However, it can also be a disadvantage, because all positions are closed at the same time, which can lead to missed opportunities.

While a regular liquidation, on the other hand, gives traders more control over their positions as they can close them gradually. This also means, however, that they’re more exposed to losses if the market moves against them.

When do forced liquidations happen?

Forced liquidation happens when an exchange closes out a trader’s position because it can no longer meet margin requirements. Margin is the percentage of the total trade value that must be deposited with the exchange to open and maintain a position.

When a trader’s margin account falls below a level previously agreed upon with the exchange, positions will automatically start liquidating. When leveraged position reaches the liquidation threshold, traders will face a “margin call,” which means they have to add more funds in order to increase margin.

How to avoid bitcoin liquidation

While there’s always a chance you’ll lose money on a trade, employing smart trading strategies such as using lower leverage and monitoring margins can help a trader avoid liquidation. Cryptocurrency exchanges that offer this type of trading also offer insurance funds as a way of minimising trading losses.

An insurance fund is a reserve pool of funds that acts as a protective mechanism against excessive loss. It is used to cover the contract loss. So, when a trader’s position has been liquidated at a price better than the bankruptcy price (that is, the price at which a trader’s losses equals their initial margin), any gains go to the insurance fund. On the other hand, if the liquidation price is less than the bankruptcy price, the position’s loss will have exceeded the trader’s initial margin. The insurance fund will then cover this deficit (or negative equity).

Insurance funds are safety nets that protect bankrupt traders from unfavourable losses. However, using liquidation exit strategies can prevent this risk in the first place. The purpose of an exit plan is to minimise the amount of money lost.

Stop-loss: Using this stop-loss order means the trader chooses to close the position with a market order once the last traded price reaches a pre-determined price. Stop-loss orders act as a safety net to limit the potential loss that crosses the entry price.

Reducing leverage, even slowly, is also a way to combat liquidation. However, the first step is keeping track of liquidation prices, and of how close your positions are to not being able to cover the margin.

The mistake many new traders make is thinking they’re too bright for the market and finding out they’re not, by getting their accounts wrecked, get taken off the playing field, bruised, and battered quickly.

If you’re taking on more risk, then leveraged trading shouldn’t be your only strategy; it should be part of various trades to hedge your risk. In most cases, traders should avoid using leverage and simply stack sats for the long run. You might not only lose your current bitcoin position today but future purchasing power you could have tapped into had you only held on to that bitcoin.

South African bitcoin pleb falling down the rabbit hole and willing to share every bump, scratch and knock along the way
View more articles from this author
PrevPreviousWhat Is A Bitcoin PayNym?
NextWhat Is Cryptocurrency Asset Commingling?Next