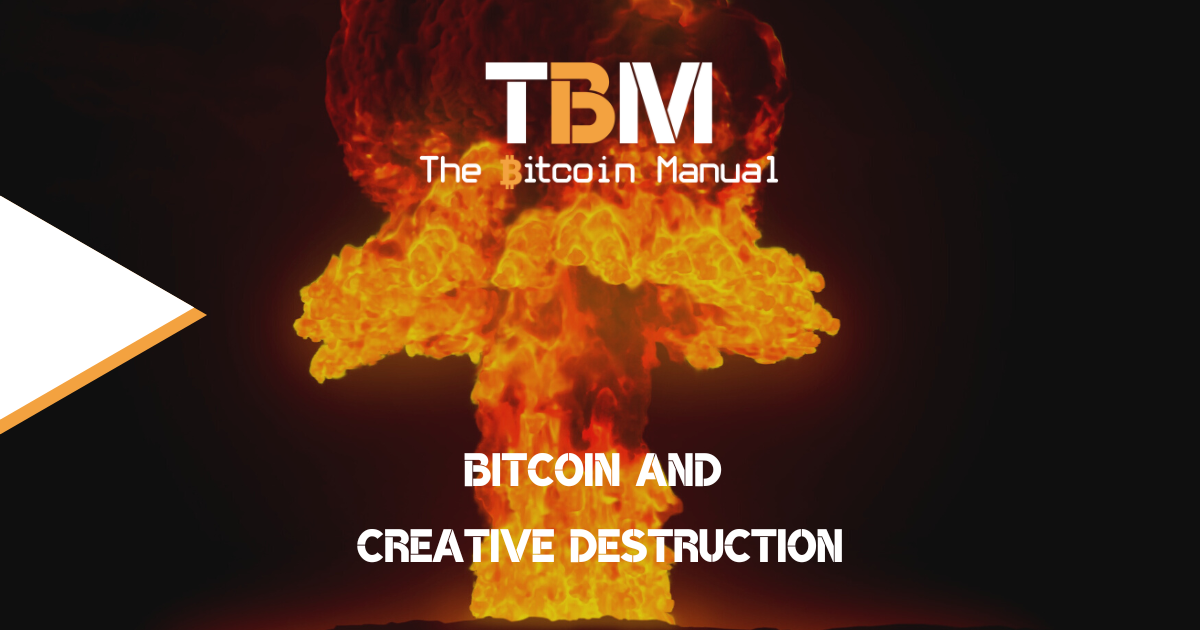 In life, we’re all taught through our experiences; if we do something constructive, we receive a positive outcome, a reward. Something that reinforces the behaviour and encourages us to repeat it and secure that carrot.

On the opposite side is the stick. If we do something destructive, we receive a negative outcome. We get burned. These reactions provide us with lessons on what not to do and encourage us to seek out corrective action and find behaviours that reward us.

That’s the nature of the world, that is proof of work, but under a fiat system, we’ve forgotten all of that. We’ll not all of us; most of us in the working world still abide by this incentive structure, but the decision-makers in the two big-to-fail institutions do not.

Governments, banks and corporations have grown so large and so systemic under a fiat system that if they fail, then we’re all at risk of going broke. The amount of capital destruction would be catastrophic, and because of that, bailouts have become the norm, and moral hazard has become the norm.

Today governments, big banks, energy producers, medical technology companies and other corporations are now free of any responsibility. They can continue to take risks and use more leverage because there is always a backstop in the credit markets, a buyer of every resort, and the government. Each time we reach a point where the economy breaks down, it’s papered over by new money creation.

Since the ordinary pleb had no other way to store our wealth but in a currency that devalues to bail these institutions out, we were at the mercy of the system until bitcoin.

Over a decade ago, Satoshi released the Bitcoin genesis block – block 0.

Embedded in it was a quote:

What is creative destruction?

Creative destruction is a process through which something new brings about the demise of whatever existed before it. The term is used in various areas, including economics, corporate governance, product development, technology marketing and, of course, nature. Creative destruction is part of the evolution process. In nature, we have examples of certain animal species adapting to changes while others do not. The ones that fail to adapt die out, and the ones with the adaptation continue to breed that adaptation to become the norm.

If we apply creative destruction in a business sense, we can all understand then consider the changes we’ve seen in the last few decades through “disruptive technology”. There are plenty of examples, from Netflix destroying the video-on-demand hiring sector and, to an extent, the physical movie retail sector. How many people still buy DVDs or Blu-rays of their favourite movies when they can rewatch them through their preferred streaming service?

A more destructive example would come in the form of the smartphone, which obliterated and absorbed multiple markest for not only regular cell phones but also PDAs, MP3 players, point-and-shoot cameras, wristwatches, GPS devices, calculators and voice recorders — among other things.

Creative destruction is awful for the status quo; they’ve already sunk so much cost into their product; they’ve probably too large to compete and so focused on protecting the monopoly they enjoyed for years. That short-sightedness and failure to adapt to new demands tend to see these companies fail, but it’s not all a loss.

Sure the company goes bust, but the skills and talent in it, migrate to new parts of the economy where it’s needed, and the buildings and resources are repurposed to become more efficient or focus on a different service or product sector. So the world progresses, and consumers are the beneficiary of it all as they continue to get more for less through product improvements.

In the process, capital that could have gone to operations that benefit society is now forced to prop up institutions that become less profitable over time and even become a net negative on the economy.

The bitcoin mining sector offers no one any special favours, and many will have to find out the hard way. It doesn’t matter how big your operation is. You will never be too big to fail when it comes to mining bitcoin. When you set up a large mining operation, you’re taking on a lot of fixed costs, such as warehousing, salaries, and maintenance, along with variable costs like energy prices and costs for parts.

The larger the operation, the more of these moving parts you need to manage and if you don’t do your cost calculations conservatively and get off your skis because bitcoin is going to the moon, you could be overextending yourself and land up in hot water.

This seems like a simple observation, but we humans all tend to think we’re masters of the universe and that we have it all figured out. Despite the fact that no one knows where the price of bitcoin is going in the short term. Many bitcoin mining operations, from the garage to the massive data centre, have made these miscalculations and been burned in the process.

When a bitcoin miner has to eat losses, they have two options, run at a loss and try to recover over time, or call it quits, sell what bitcoin and mining equipment they have left to cover debts and move on. When they do, there’s someone else on the other end of the trade.

A profitable miner might pick up more equipment, or a home mining enthusiast might pick up an ASIC at firesale prices and start their journey. This helps distribute the hash rate, and ASICS are spread all over where the cheapest electricity can be found.

While the individual who miscalculated suffers, the network improves off of the back of the process; that is creative destruction.

Bitcoin’s creative destruction doesn’t only exist in the world of suck cost due to hardware, but also in the world of software. If you’re building a closed-source software product, it has to be miles better than anything on the market or produced by the open-source community.

Why would I want to pay for something that I can run myself or use for free? That’s the thinking you’re going to have to contend with when launching a SAAS business in the bitcoin ecosystem. So in order to attract customers, you really have to provide them with a lot more value creation for their fiat or satoshis.

As for open-source technology, if you’ve created a piece of software and someone is able to fork it and add on their own improvements that the market values, your software users can quickly go to zero as people migrate to the version that provides them with more for less.

It’s a constant competition between developers to provide more services and better user experience to lure people into using their software and hopefully earn through whatever monetisation system they’ve added to their software, be that subscription to premium services, routing payments on the backend, running 3rd party adds or accepting user donations.

There will be a product for every customer; some would want a free version but are willing to see ads, while others are willing to pay to use hosted software, while another niche would give up time and effort to take the cost upon themselves and run the software in a self-sovereign fashion. When you have all these options, it creates a capitalistic market with plenty of optionalities.

Unlike the traditional software market we see today, where so many are forced to purchase software or a subscription service because one service provider has a monopoly.

Creative destruction on a bitcoin standard

As bitcoin extends its reach into the wider economy, there are some companies who are adopting it as a treasury reserve asset, along with ordinary plebs who choose to save the product of their labour in bitcoin. Due to bitcoins price appreciation, these companies and individuals benefit from the wealth accumulation in bitcoin, and those funds aren’t going to be hodl’d forever.

Humans are constructive and creative creatures, and once opportunities present themselves, you’ll see bitcoin put to work. These companies and individuals, sitting on a healthy bit of equity, can deploy that capital or securitise that equity to raise debt and acquire competitors or start competing businesses in their field of expertise with the backing of bitcoin.

The consolidation of weaker players and the additional competition from new entries will drive deflation in various markets. The more deflation that occurs, the harder it becomes for fiat businesses to generate a return to service their debts, and so continued creative destruction will occur as the weakest

Break it down to build it back up

We now have a new financial architecture, new incentive structure and accounting system, that we can all verify and one where no one has the upper hand through accounting trickery. If you can’t produce, you are of no use in a competitive marketplace, and you either need to find a market you can compete in or better yet create a brand new one where you can create value that attracts bitcoin.

When the effort and creativity of the human experience are not focused on how I can best manipulate an excel spreadsheet to get more for less and pointed at how can I tackle market inefficiencies where others get more for less, and I collect the payment for these services, we unlock the power of deflation and with it, comes creative destruction.

Bitcoin is about bringing back economic consequences. It’s about rewarding the prudent, the wise and the productive.

South African bitcoin pleb falling down the rabbit hole and willing to share every bump, scratch and knock along the way
View more articles from this author
PrevPrevious9 Reasons Why You Want To Mine Bitcoin At Home
NextWhat Is The Bitcoin White Paper?Next