What Is The Bitcoin White Paper?

Home » Articles » What Is The Bitcoin White Paper? 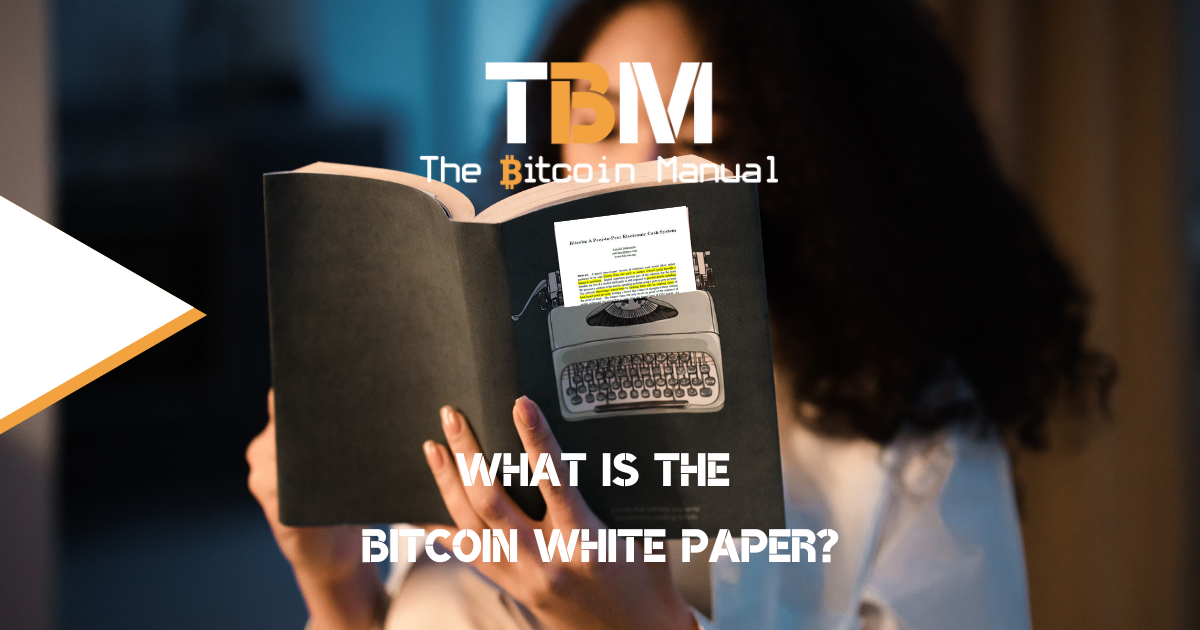 Every product starts with the ideation phase; this is where an idea is put out into the world to elicit criticism and feedback and solicit others with expertise in certain areas the project covers. By creating a formalised document, the creator can gauge the appetite for the product shortcomings with the idea and even encourage others to help work on the project or improve it. While bitcoin did start in 2009, it is built on the back decades of research and learnings; it draws inspiration from a range of projects, learnings, failures and community and enthusiast feedback.

Published on 31 October 2008 by an anonymous individual or a group under the pseudonym Satoshi Nakamoto, the Bitcoin Whitepaper laid the groundwork for a fundamental change in the execution of global payments and the transformation of entire industries in terms of data management. The nine-page document might seem like a modest proposal, but it remains the founding document that has birthed the world’s most powerful and decentralised network and the home of the world’s hardest money.

What is the bitcoin white paper?

The bitcoin whitepaper is a technical description of the bitcoin network, how it works, its incentive structure and the elements required to run the network. The white paper was the first document to outline the principles of bitcoin’s cryptographically secured, trustless, peer-to-peer electronic payment system that was fundamentally designed to be transparent and censorship-resistant, as well as put financial control back in the hands of the individual.

At that time, the world was gripped by a financial crisis catalysed by excessive speculation in the financial markets and banks risking millions of dollars worth of depositors’ money.

What does the bitcoin white paper cover?

The white paper begins by addressing the critical issues associated with previous attempts at creating an electronic payment system and a digital currency. Satoshi suggests these issues stem from relying on a “third party”. The third party could be a bank or fintech provider like Paypal, usually involved when processing a transaction. These systems require great trust from consumers, who give responsibility to this third party as all fiat transactions done digitally carry custodial risk built into the system.

In this section, we get our first introduction to bitcoin, the asset and how, by signing its unique hash on the blockchain, you can prove ownership of a unique amount. You can verify all its previous signatures by adding your own to the end, and the chain continues, forever written in stone by all of bitcoin’s participants from then on.

These unique signatures prevent double-spending without a centralised system.

The timestamp provides proof of a transaction’s existence by recording the exact time and date that each transaction is processed. Like a transaction history in your bank account, a timestamp records all necessary information from the transaction.

The proof of work (PoW) system is how the bitcoin network tethers itself to economic reality as it forces peers to expend a bit of effort in the form of electricity via mining to identify and verify the hashes that represent blocks of transactions.

To ensure the network is decentralised and remains that way, participants in the network use their computers (also called nodes) to house a copy of the blockchain to ensure blocks added to the chain remain in consensus with the rules of the network.

To encourage individuals to act rationally and contribute power to verify any block, they need a reason, or rather a reward for their efforts. Every successfully verified block creates a certain amount of bitcoin split between the miners that helped to add it to the ledger.

A overcome the possible limitations of disk space that could result in the centralisation of the network, a potential problem anticipated by Satoshi; they proposed the idea of using a Merkle Tree system that would create a chain of referrals back to a root hash.

If basic devices can connect as blockchain nodes, then they may only be able to host the most lightweight version of the blockchain.

To ensure the limitations on user data, the blockchain would require a public key to identify a user to the network and an associated private key to sign the coins sent to them. This allows them to keep their identity safe while still verifying it on any transaction.

Satoshi provides the concept of an impenetrable network, one unable to be attacked by bad actors. They outline the math that makes this proposition extremely unlikely through proof of work and the network incentive structure.

Dive into the white paper

If you want to read the white paper or download a copy of this legendary document, you can find a copy on the bitcoin.org website.

From paper to paperless

After reading the bitcoin white paper and getting to grips with the technological concepts behind bitcoin, your education doesn’t stop there. Bitcoin continues to develop and improve as it scales in layers and builds out its circular economy. If you’re keen to keep up with the latest developments, check out the number of articles and guides on The Bitcoin Manual. Use it as a jumping-off point before diving into more in-depth work in bitcoin books or casual discussions such as bitcoin podcasts.

South African bitcoin pleb falling down the rabbit hole and willing to share every bump, scratch and knock along the way
View more articles from this author
PrevPreviousBitcoin And Creative Destruction
NextHow To Close A Lightning Channel?Next