What Are The Tax Implications of Bitcoin?

Home » Articles » What Are The Tax Implications of Bitcoin? 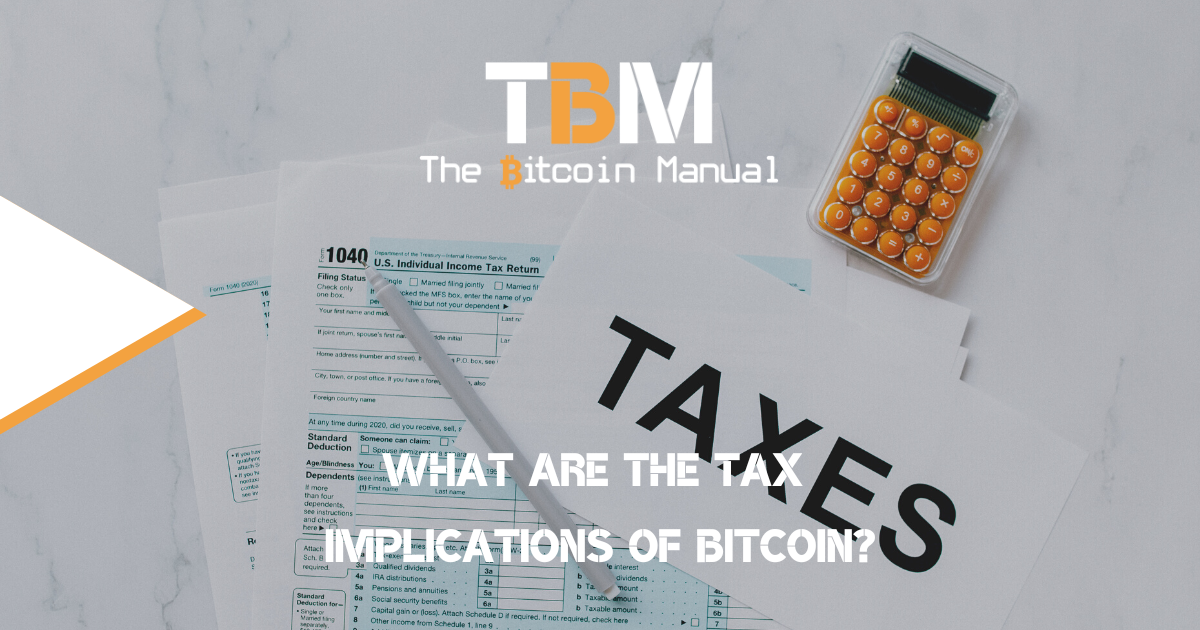 With the staggering rise and fall of bitcoin, we’ve seen the network settle billions in transactions each year, be that from paying salaries, trading, donations and gifting. As more value flows into bitcoin and value is exchanged on the network and adjacent networks like exchanges, bitcoin holders, investors, and traders may have serious tax questions on their minds.

In previous years governments and their tax services took a lax attitude towards the ecosystem, but as the market cap grew and the value traded became a considerable stream of income, they’ve changed their tune. Tax authorities worldwide are working together, along with chain analysis firms and exchanges, to help track down funds they feel are owed to them.

They are stepping up enforcement efforts, and even those of using bitcoin without much consideration for tax obligations are slowly coming to an end. If you have been buying and more importantly selling or earning bitcoin, you might want to start putting together your accounting of these trades and earnings for future tax filings.

If you’re unsure of what actions could be liable for taxes, we’ll run through them below to give you a broad idea of what to expect.

Things start becoming taxable when you use bitcoin as a method of exchange. This includes selling your bitcoin for U.S. dollars, stablecoins, another cryptocurrency or any other fiat currency. Depending on the country you live in, taxes may also apply when paying for goods and services with bitcoin.

The moment you exchange bitcoin for another asset or purchase, you will need to account for the price at the time of the purchase or trade and then use that as a method of calculating the short or long-term capital gains involved depending on how long you’ve held that bitcoin.

Bitcoin mining is also considered a taxable event by many governments around the world, but it is not properly enforced, especially on the private mining level. Certain countries have yet to come to terms with bitcoin mining and do not have a framework to deal with this additional form of income, and the process of acquiring it, so you’ll need to check with your local tax professional regarding your obligations.

If you do live in a country where there is a framework for tax on bitcoin mining, then you will need to keep tabs on issuance into your wallet and the cost when you acquired the bitcoin. The fair market value or cost basis of the coin is its price at the time at which you received it in your wallet for the process of mining. Your taxable income will rely heavily on the difference between the cost to acquire the bitcoin and the price it can fetch on the open market at the time of mining the coin.

The good news is that you can make business deductions for equipment and resources used in mining. The nature of those deductions differs based on whether you mined the bitcoin for personal or individual gain.

If you run a mining business, then you can make the deductions to cut down your tax bill. However, these deductions are not available to you if you mined bitcoin for personal benefit, and it would be treated as part of your annual income.

If you’re receiving your salary in bitcoin, you also need to be aware of the tax implications and file your returns accordingly.

To put it simply, say you’re a freelancer who wants to receive a payment worth $1,000 from a client in bitcoin. On the day of the payment, if the value of the bitcoin is $10,000, you will end up receiving 0.1 bitcoin.

When it comes to taxation of bitcoin income, if you’ve sold that bitcoin for fiat, you will need to determine the difference between your adjusted basis and how much you sold it for; you should report this number on your taxes when you sell the bitcoin.

If you haven’t sold your bitcoin, you can file the taxes based on the fiat value of the invoices/pay slips at the time and settle your tax bill accordingly.

Due to this hassle and how unclear the process is, many people do not bother to file their bitcoin taxes work and end up not declaring that income. This may have worked in previous years, but it won’t always be the case as the market matures.

Tax authorities are becoming stricter in compliance with cryptocurrency earnings, especially for those paying and settling salaries across borders. So if you haven’t been declaring your bitcoin income, it’s about time you started doing so, or you could face future penalties.

Depending on the country you’re in, you may only need to apply the rules once the tax authority provides clarification, or you could be asked to file amended returns for the income you’ve received in the past.

While this doesn’t happen very often and might not happen again in the future, it’s worth noting that if you receive additional coins from another project mimicking the bitcoin blockchain, you might be liable for taxes.

Hard forks of a bitcoin occur when a blockchain split occurs, meaning there is a change in protocols. A new coin, with differences in mining and use cases from its predecessor, is created. Holders of the original cryptocurrency may be given new coins on a separate blockchain which has its own ticker, market and market price.

While not very common in bitcoin circles, projects could airdrop bitcoin users an allocation, and if you claim the funds on this new chain, you will create a taxable event.

Ironically, bitcoin donations are treated similarly to cash donations, despite not always being recognised as a currency in most countries, apart from the legal tender status bitcoin holds in El Salvador.

Bitcoin gifting is tax-deductible, though donors face limits on how much they can deduct based on their tax bill. An appraiser will assign a fair market value for the bitcoin based on its market price at the time of donation. To add gifting as a consideration, you will need to provide a tax receipt from the institution you donated towards or provide proof of the transaction.

The easiest way to avoid paying taxes on bitcoin is not to sell any bitcoin during the tax year. You have nothing to worry about if you’re a long-term holder of bitcoin. When you convert bitcoin into fiat or stablecoins, you create a taxable event that requires you to review it for tax expenses.

Another method of reducing your tax bill is to use a strategy known as tax-loss harvesting. This is the timely selling of securities at a loss to offset the amount of capital gains tax due on the sale of other securities at a profit.

This strategy can help preserve the value of the investor’s portfolio while reducing the cost of capital gains taxes. The reason tax loss harvesting is popular in bitcoin is because of the ability to repurchase the asset rather quickly without being considered a wash sale.

Borrowing against your bitcoin

Another method of reducing your tax burden when tapping into the value of your bitcoin is to use your bitcoin as collateral for a loan. Bitcoin-backed loans can range from small short-term loans ranging from a month to two years or long-term debt such as bitcoin-backed home loans.

What happens if you don’t report taxes?

There is a common misconception that because bitcoin is a borderless, stateless, uncensorable and decentralised store of value, that authorities cannot account for the value you’ve acquired through bitcoin. As a result, many novice bitcoin traders and holders have placed themselves in a compromising position where they’ve created tax liabilities but do not feel the need to disclose it.

Tax evasion occurs when taxpayers knowingly do not remit taxes on any source of income, whether it be related to bitcoin, wages, salaries, stocks, real estate, or other investments. If the tax authorities in your country have reason to believe you have engaged in tax fraud, they may audit you.

Be mindful that trading platforms or any KYC and AML-compliant service may issue tax statements, notifying the tax authorities that you have engaged in bitcoin transactions, along with information on your trades.

Even if you’ve locked your funds in bitcoin on-chain and they cannot force you to give up your bitcoin, tax authorities may seek other means to acquire the funds they feel you owe them. If not, you could be liable for penalties or amounts that include interest.

Bitcoin is not regarded as a share, and therefore revenue services do not treat it as the average for the year. When calculating your bitcoin taxes, you should not use the average cost or last in, first out (LIFO) accounting method, as these can cause inconsistencies that might be flagged by your local revenue services.

To be conservative, it is advised to apply a first in, first out (FIFO) approach, although specific identification is not excluded by the tax rules.

To calculate your taxes as gains as an investor, you need to know your base cost. Your cost is however much it costs you to acquire your asset plus any allowable expenditure. Allowable expenditure refers to costs associated with acquiring your asset, for example, buy fees or trading fees. While it may be fairly straightforward to request a data dump from an exchange you’re using, it becomes a lot more complex if you’ve used on-chain or paid in bitcoin on-chain.

This will involve isolating and date stamping the UTXOs and working out the costs at the time, along with the UTXO you spent out of your wallet, which can quickly become complicated.

You can use the information provided here to give you an idea of what information you would need to source to start to calculate your taxes, but do not take this as tax advice. We strongly advise that you speak to a tax professional in your country, someone who is familiar with the local interpretations of bitcoin and how they apply to you and the ways you’ve acquired the value throughout the taxable year.