Is Bitcoin Sound Money 13 Years On? 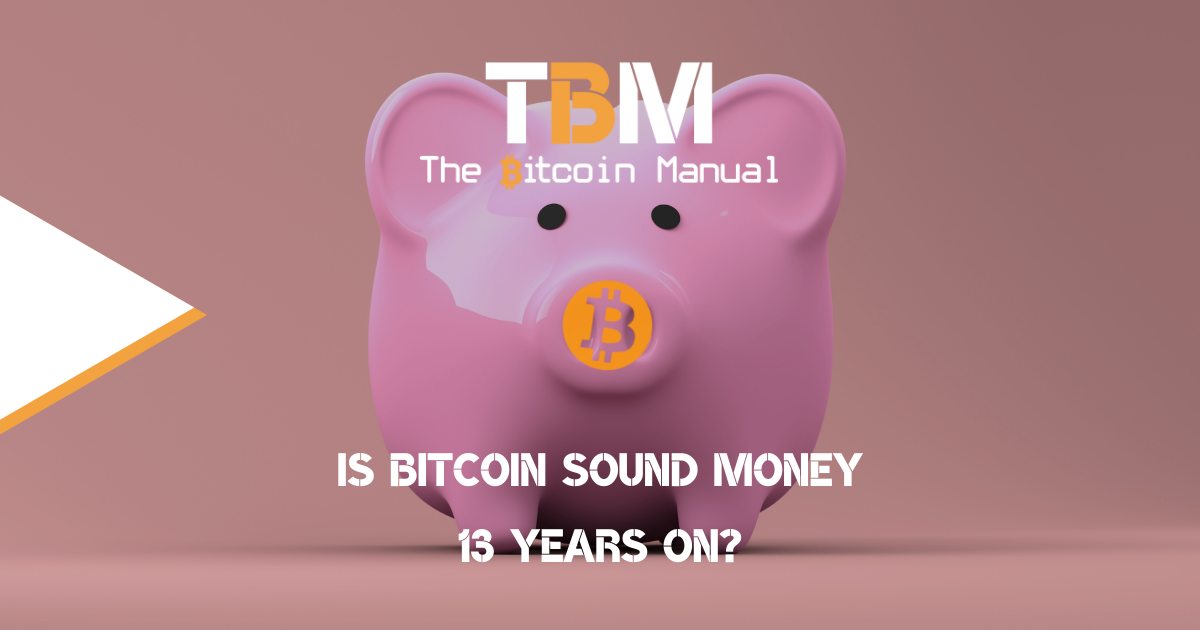 An article popped up on my phone earlier and it turns out that there’s a place not too far away from me that made it in to the headlines of “The Sun” newspaper – they called it “The Crypto Village”.

I was intrigued and so I popped in to the pub that was mentioned and spoke to the landlord about it to find out more. All the while, trying to plant the seed about Bitcoin as he wasn’t sure about the difference between Bitcoin, Ethereum and all these other shitcoins.

My fears were confirmed that his contact, who has been “involved in the industry for 8-9 years”, was setting something up that wasn’t related to Bitcoin but it “might be worth something one day”.

We talked a little about my background and how I learned the lesson that I shared with many of my friends that it’s best to just focus on Bitcoin.

It’s been around for 13 years, its money system can’t be changed and it’s truly here to stay.

Unfortunately, the landlord had other customers to attend to and the conversation ended there but I will be back 😉

The “Next Bitcoin” Fallacy

This conversation got me thinking again about how people view the different aspects of Bitcoin.

Namely, its price. That’s what makes the headlines after all!

It’s easy for lazy reporters or content creators to get the clicks on those cookie cutter articles we’re all familiar with.

Sadly, these articles then go on to give even more eye wateringly high percentage of returns “if you had invested in x coin at x point”.

This seed of “overnight millionaire status” gets planted and it perpetuates a fiat mindset where you don’t value the money you earn, hence, you end up not valuing your time and suffer the effects of high-time preference.

You will see the shitcoin snake oil salesmen, the moonboys and all the anonymous social accounts pipe up and say things like, “My shitcoin x made 100x more than Bitcoin did last year” with absolutely no proof that they bought that coin.

Or they are the founders of the project and stand to gain the most from you buying tokens and pumping the price for them to dump on you.

This is not the future of money.

The Problem Of Unsound Money

When you start learning about the history of money from various books that are out there, you realise just how bad things have become since the fiat money system took over.

If money has to be “backed” by something then is it really sound money to begin with?

The term “fiat” literally means “decree”, which means that it’s an order that comes from the government.

Do you trust them?

Fiat is money that is “backed” by the government and as we’ve seen over the last 50 years, at the push of a button, they can flood the system with new money and our purchasing power that we work so hard for is eroded in front of our eyes.

What this does is negatively push the focus on finding ways to make more money to keep up with inflation for plebs like us with day jobs.

Those a little closer to the money printer look at how they can just make more money for themselves before it trickles down to the rest of us via the Cantillon Effect.

Bitcoin Is Sound Money For The Digital Era

The sad consequence of this meant that the focus moved away from creating a productive and “relatively peaceful” civilisation in a sound money era when gold was used as money for millennia.

Gold still had its limitations though as its supply was not finite, was difficult and often risky to transport and had to rely on 3rd party custodial services. Unless you kept your own vault of course, which has its own risks.

If the price of gold increased then you’d have more people focusing their efforts in mining for gold which would increase the supply, people dump on the market and it would drop the price again.

Although this also happened with other metals like silver and copper and their prices tanked as well, with gold it was at least a lot harder to mine, hence it remained as the money of the world until fiat came along.

In this digital era we’re in, money is mostly digital now and although we can still use cash, its use is declining at a faster rate each year.

However, it’s still fiat money, just in digital form and the chart below shows that even over the last 2 years in the UK, you have lost 4% of your time you traded for £.

It’s much worse in other countries by the way.

Bitcoin’s known issuance rate, final maximum amount of 21 million Bitcoins and its decentralised nature means that it can potentially fulfill the role that gold played for millennia.

Sound money, and therefore Bitcoin, doesn’t need to be backed by anything.

The protocol that facilitates its daily operation is what it needs to keep running and this is maintained by the users of the network, who believe that Bitcoin is money.

Unlike pretty much every other crypto out there which needs founders, they have a “fiat-esque” model and can change its token issuance on a whim with token burns and whatever else they fancy.

That’s not something I want to be involved with.

So as you can see, there’s a lot more to this whole thing than just the “price” of Bitcoin or shitcoin x, where you need to do your own research.

Starting with an understanding of money, what it is and how it works will put you in good stead and make you think things long term. With only an estimated 1.3% of the global population owning Bitcoin, there’s a long way to go yet.

A possible future with Bitcoin is that the main blockchain layer is used for final settlements of payments with a majority of the transactions taking place on second layers like lightning and liquid or even 3rd layer applications.

This is not too dissimilar to how CHAPS works as the final settlement layer in the UK and Mastercard/Visa in the fast payments layer.

Whether government issued money will be backed by Bitcoin like it was to gold before 1971 or we see hyperbitcoinization happen in the next 13 years and beyond remains to be seen.

Time will tell but either way, Bitcoin’s first 13 years have been meteoric to say the least, long may it last.

British bitcoin pleb falling down the rabbit hole and willing to share every bump, scratch and knock along the way
View more articles from this author
PrevPreviousHow To Earn Bitcoin From Exercise
NextCryptocurrencies Are Digital Fiat ReplicasNext