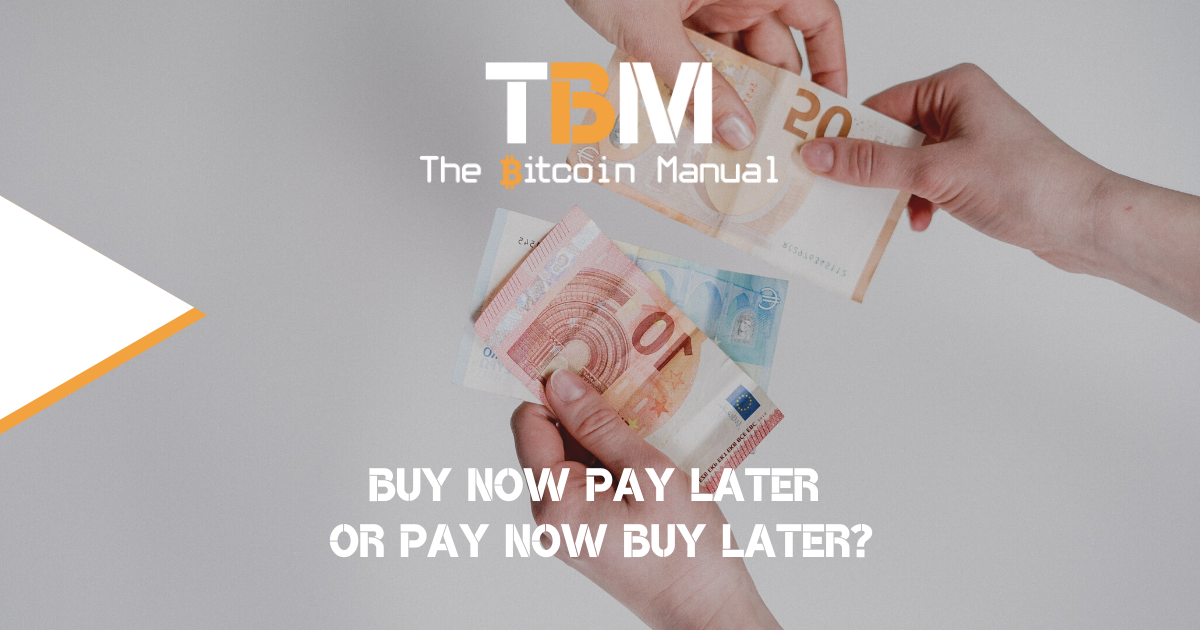 The fiat system lives off of debt; governments, corporations and individuals are constantly expanding their debt obligations in various forms. In fiat, when you create debt, you’re effectively bringing new currency units into the system. Debt is the creation of fiat, and when you can “will money into existence”, you’ll find all sorts of weird and wonderful ways to saddle yourself with future payment obligations.

It may be for a home, a car or education; we see this as reasonable reasons to get into debt, I don’t, but that’s me. Eventually, the system runs out of people to issue debt to for those means, and they gradually look for new ways to create fiat.

There were times when you needed to buy something but couldn’t quite stretch to afford it, so you would be forced to save until you could acquire it. But in the fiat system, who wants to save, savers are losers; it’s better to opt for instant gratification.

This is where buy now pay later schemes to come in.

How counterintuitive is it to purchase something but not pay for it immediately? It shows how far fiat money pushes people. We are now normalising the exchange of goods and services without payment but collateralised by the compensation of future labour.

What is buy now pay later?

Buy now pay later schemes do what they say – you get the opportunity to purchase something without having to pay for it immediately and settle the bill at a later date. Buy now pay later is also referred to as the point of sale credit; some schemes give you 30 days to pay while others allow up to 12 months.

When I hear about financial products like these, I want to scream into a pillow. Not only because I think they’re stupid products that drive needless consumption, but because I know people will queue up to use them.

Simply because the offering is there and a centralised point of authority is shoving it down their throats, consumers will accept it because, in return, they can get their shiny trinkets a lot quicker.

In general, if you repay the price of what you bought within the delay period, you won’t pay any interest as these periods are usually interest-free. Stores offer this because they can move stock faster at a higher margin and therefore have less stock that they need to sell at low, no or negative margin.

However, they count on a certain amount of people going over the interest-free period and then slapping them with huge premiums. Sure it may not be a large amount in currency unit terms, but percentage-wise, they are used. In some cases, are buy now pay later schemes where interest may be charged at a high rate as high as 39.9% APR.

Another way to throw you in debtors prison

If you’re one of those who fell for the buy now pay later scheme, I’d like to congratulate you on having zero chill and the highest time preference I’ve ever seen.

Most people don’t read the terms of these contracts; they want the goodies, and stores and credit providers tend to rely on this fact. If you miss a payment, it can quickly become expensive if you don’t make your repayments on time.

If you don’t clear your debt before the delayed period is up, some providers will ask for a settlement fee, or a lump sum of interest may be added to the debt.

Then to rub lemon juice and salt in your wounds, you may be charged late payment fees too. Missed payments could also be recorded on your credit report and affect your credit score.

As you obliterate your credit score for the bigger television, or the new LameStation 5, you become even more favourable to them. The risker you are, the more interest they can pile onto anything you purchase on credit in the future.

Now, if you think stores and their credit providers are the ones sitting with all the risk, you’re mistaken. Why would they want to sit with that risk? Even it nets them a fat yield of up to 39%?

So what do they do with that debt book? They sell it off, of course; the primary issuer will, in many cases, sell their debts at a certain price and give it to a third party who would try to recoup as much of the debt as possible to make a profit over what they paid for the debt book.

Alternatively, they group all these short term loans together, securities them into products and sell them on to funds.

Exactly what they did with mortgages in 2008, they’re doing with other credit creation vehicles like auto loans, student loans and now short term credit.

If that thought doesn’t gross you out completely, then I don’t think you understand how systemic these products are to the perceived wealth we have as a society today. If it blows up, it will leave holes in pensions, insurance companies and many institutions who rely on these products for yield that can beat base money inflation.

That sounds like a foreign concept, I am sure, but you know what another word for pay now and buy later is? It’s called SAVING! That’s right; Bitcoin allows you to take the purchasing power you have right now and store it in something that can protect it and appreciate in value into the future.

You are paying into Bitcoin now to secure the optionality of securing more time, goods and services in the future.

Savings that increase your purchasing power not only gives you more for spending less but also allows you to avoid additional payments like interest rates and penalty fees.

Not only that, but when you stop discounting the value of the future, you re-evaluate what you purchase today. The better you become at capital allocation, the more value you get out of the capital you do choose to spend.

The savings you have can also be used to persue other goals you may have that you didn’t know you could achieve. Instead of filling a void with another meaningless consumer purchase, you have resources to pursue more meaningful ideals, ideas and activities.

South African bitcoin pleb falling down the rabbit hole and willing to share every bump, scratch and knock along the way
View more articles from this author
PrevPreviousStable Coins Are Still A Shitcoin
NextOn Dealing With Bitcoin Price VolatilityNext