Home » Articles » How Does The Howey Test Apply To Cryptocurrency? 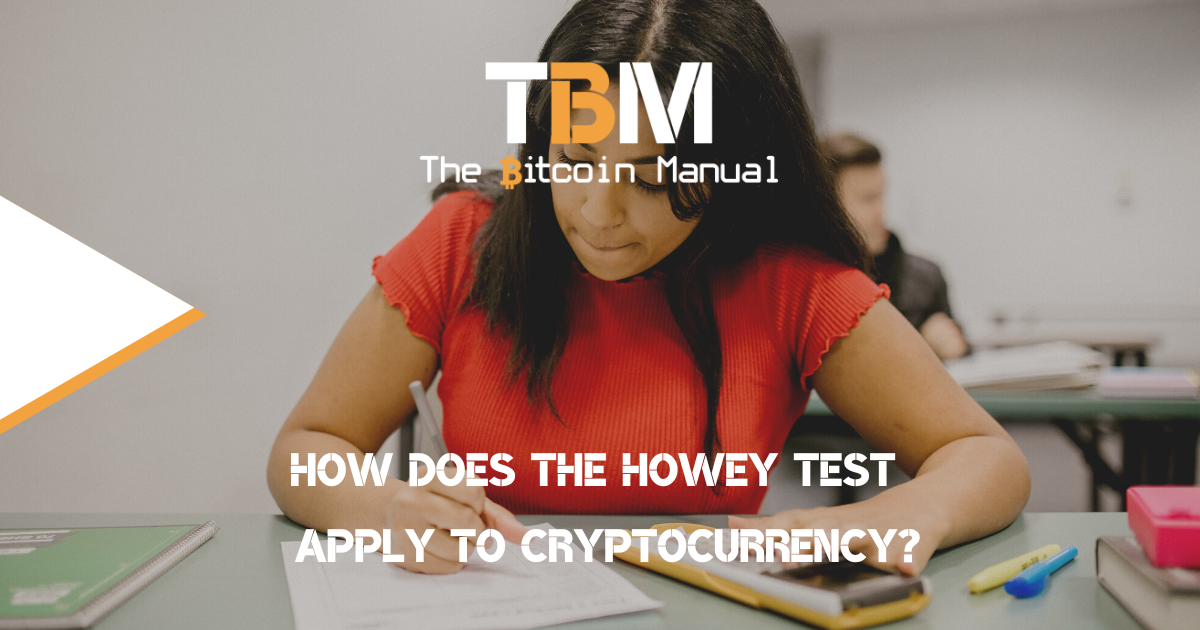 The invention of bitcoin took the idea of blockchain, decentralised ledger technology, proof of work, and cryptography and turned it into a brand new asset class. The mining of the genesis block was the day in which cryptographically backed energy money left the theoretical world, leaping from being academic papers to a fully fleshed out global network that we have today.

Bitcoin’s revolutionary technology would eventually be copied, and so began the evolution of the altcoin market. These alternative coins tend not to respect the design niche bitcoin took nor the method of distribution and only cherry-picked parts of the technology needed to get it off the ground and raise capital.

Each cryptocurrency that is launched deviates further from bitcoin and as they make trade-offs, so too do they bring possible attack vectors to light, like that of regulatory attack.

As hundreds of new tokens such as ICOs, DEFI tokens, utility tokens, and governance tokens are spun up each year, promising all sorts of weird and wonderful terms to attract investors, it started to attract more capital and take more risk. The retail trader would be left holding the losses. The more the public is defrauded by cryptocurrency, the more pressure will come on central authorities to regulate the industry.

If you keep wrecking your investor base, you’re going to get the long arm of the law sniffing around and trying to reduce the impact these schemes can have on the public. One way to do this is to bring cryptocurrency under securities law, but to do that, cryptocurrency has to be classified as a security.

So how is the classification determined? It comes down to a particular test: the Howey Test, which determines whether a transaction is an “investment contract.”

What is the Howey Test?

The “Howey Test” is a way in which the Supreme Court can evaluate an investable asset and determine whether certain transactions qualify as “investment contracts.” If the asset is deemed to be an investment contract, then under the Securities Act of 1933 and the Securities Exchange Act of 1934, those transactions are considered securities and therefore subject to certain disclosures, registration requirements, and certain regulations that apply to securities.

The history of the Howey Test

In 1946, the Supreme Court heard a case (SEC v. Howey) that concerned whether a leaseback agreement was legally an investment contract (one of the types of investments that is listed as a “security” under the Acts). In Howey, two Florida-based corporate defendants offered real estate contracts for tracts of land with citrus groves. The defendants offered buyers the option of leasing any purchased land back to the defendants, who would then tend to the land, and harvest, pool, and market the citrus. As most of the buyers were not farmers and did not have agricultural expertise, they were happy to lease the land back to the defendants.

The SEC sued the defendants over these transactions, claiming that they broke the law by not filing a securities registration statement. The Supreme Court, in issuing its decision finding that the defendants’ leaseback agreement is a form of security, developed a landmark test for determining whether certain transactions are investment contracts (and thus subject to securities registration requirements). Under the Howey Test, a transaction is an investment contract if:

Although the Howey Test uses the term “money,” later cases have expanded this to include investments of assets other than money. The term “common enterprise” isn’t precisely defined, and courts have used different interpretations. Most federal courts define a common enterprise as one that is horizontal, meaning that investors pool their money or assets together to invest in a project. However, other courts use different definitions.

What is a “Security”?

An investment that is considered a security is a financial instrument that holds some type of monetary value and can be sold or traded in a financial market. The most common types of securities are stocks, bonds, ETFs (exchange-traded funds), options, and mutual funds.

There are four main types of securities:

These definitions are clear, but with the draw of blockchain and the low barrier to creating a tradeable token that leverages a blockchain and access to the market, it has muddied the waters with securities regulation, leading to some grey areas rife with exploitation and sinister actors.

Elements of the Howey Test

Under the Howey Test, a transaction qualifies as a security if it involves the following four elements:

To be considered a security, a transaction must meet all four prongs of the Howey Test.

How does the Howey Test apply to bitcoin?

Bitcoin doesn’t pass the Howey Test; even though bitcoin meets the test’s first prong, it doesn’t satisfy the second and third elements.

How is the Howey Test applied to altcoins?

Since the Howey Test test applies to any contract, scheme, or transaction, it is important to establish a framework for dealing with the rampant rollout of tokens and private forms of money using a blockchain.

Digital currency projects with investors and project backers have been able to act with near no oversight versus that of the traditional markets, which has allowed certain characters to raise capital without limitations and hurt several investors along the way.

The grey area in which certain cryptocurrencies and initial coin offerings (ICOs) play allows them to get away with this, but as the market matures, they may be found to meet the definition of an “investment contract” under the test.

If they are deemed securities, there could be fines, jail time for lead participants, or even completely shut down of projects that cannot meet compliance standards. It would also prove that these cryptocurrencies are indeed not centralised service providers, which is why there is so much an incentive to fight back, delay proceedings, and obfuscate operations to extend the window of regulatory arbitrage these projects enjoy.

Some would argue that the Howey Test is a dated practice and new tests need to be developed to evaluate the world of tokens, and this could be true in the future. However, we still need to deal with what’s going on today, and the Howey test is still one of the SEC’s most important instruments for regulating cryptocurrency and protecting investors.

Altcoins may enjoy free reign for now, but this won’t last, and if these assets are deemed securities, this could lead to problems down the line, such as compliance laws, lawsuits, and much more. Those who invest in these tokens should consider that they are living on borrowed time even though the wheels of justice move slowly.

As cases pile up against these tokens, and the number of retail investors burned from it grows, so too will growing pressure. Once the authorities start to build up enough evidence that they can provide without a shadow of a doubt, these assets are securities; you can imagine that with each case, the others will get easier, and then the burden of proof will be on the side of the altcoin to prove that it is not a security.

South African bitcoin pleb falling down the rabbit hole and willing to share every bump, scratch and knock along the way
View more articles from this author
PrevPreviousBitcoin App: Fuji Money
NextHow Bitcoin Will Test Your PatienceNext