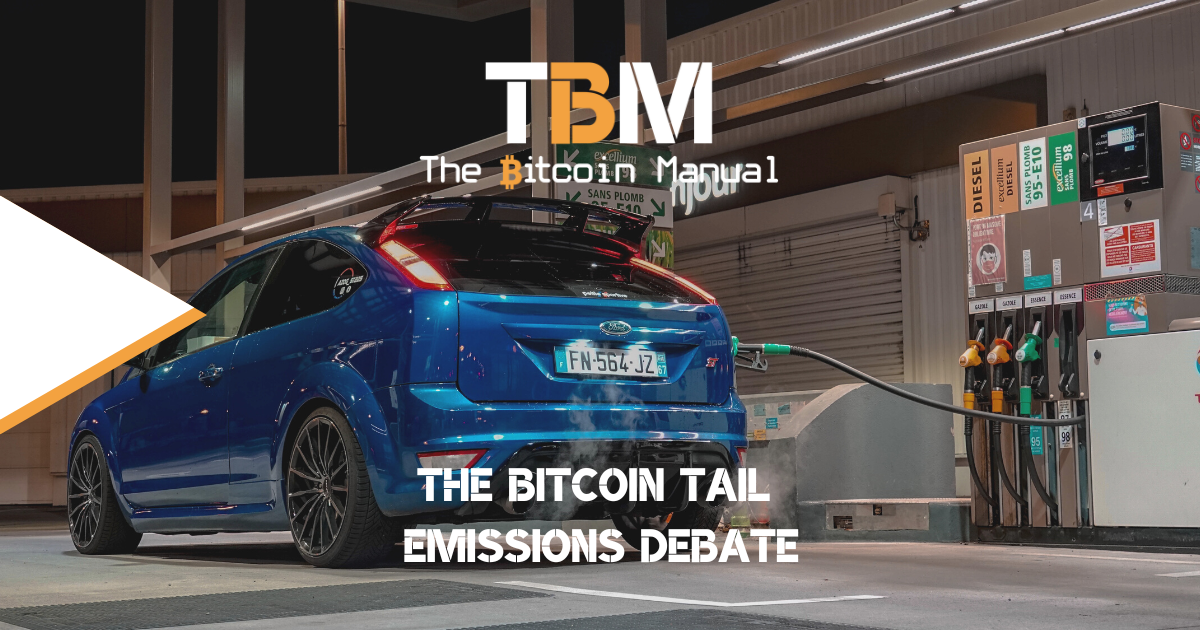 It’s almost seen as a fact of life at this point, death, taxes and 21 million, right? To any bitcoin maximalists, there will be only 21 million coins in existence. Its hard cap, fixed supply, and known issuance rate are one of bitcoins’ major selling points. If we are to get technical, there isn’t exactly 21 million, but it’s an easy rounding-off. Then we have to consider that there will never be 21 million available because people lose their bitcoin, forget about their bitcoin or die with their bitcoin, and that supply is now lost forever.

To most people who believe in the bitcoin thesis, the talk of changing the hard cap, inflation rate, or even halving schedules is a complete non-starter. They bought into the network based on these rules, and they will not change it, especially when the debate is about some hypothetical issue in the future.

However, there seems to be a growing chorus of people who worry that a hard cap isn’t without its problems and that bitcoin will run into difficulties when its block rewards become too small (and later stop completely in 2140 and beyond).

These debates are interesting to follow and do a great job of killing time while stacking sats. They usually tend to surface during crab markets where there is little to no price action, and people get bored and look for ways to stir up the pot and keep the banter interesting.

So let’s dive in and see what it’s all about, shall we?

Why the cause for debate?

A recent surge in discussion about this issue was incited on two fronts, one from Monero pushing to update their monetary policy and developer Peter Todd, who in July published a paper titled, “Surprisingly, Tail Emission Is Not Inflationary.”

Basically, Todd noted that “no proof-of-work (PoW) currency has ever operated solely on transaction fees” and that the lack of rewards may make block production unstable in the future.

Given how well respected Peter Todd is within cryptocurrency circles, many other serious commentators have taken his arguments as the launchpad for an exploration of whether bitcoin’s monetary policy has a sustainable future. The idea behind tail emissions is that miners will leave the network and stop pointing hash rate to it if their rewards begin to dwindle. If fewer miners are securing the network, it becomes centralised and could be attacked.

You’ll always find someone who feels they have an idea Satoshi didn’t think of, and there is never a shortage of reasons why bitcoin needs to be modified in the not-too-distant future.

If you ask bitcoiners what shitcoin, they might give a pass to it would probably be Monero; it uses proof of work, it’s privacy-focused, but it sacrifices verifiability of supply, which seems to be its Achilles heal as a method to store value. The privacy focussed Monero has entered the highly-anticipated “tail emission” debate by deploying it on their chain.

Now since Monero has some similarities to bitcoin, this only further stirs the pot and drives talk of having bitcoin update its monetary policy towards having tail emissions.

“This tail emission means that Monero miners are not 100% reliant on transaction fees, and so can guarantee a specific income for themselves regardless of the fee market. This security and assurance for miners is a big departure from Bitcoin’s security model.”

“This tail emission means that Monero miners are not 100% reliant on transaction fees, and so can guarantee a specific income for themselves regardless of the fee market. This security and assurance for miners is a big departure from Bitcoin’s security model.”

But let’s not solely rely on my opinion; let’s look at the others in the camp.

Breaking the hard cap is a hard sell

Starting with the stick to what we have, team, the argument against tail emissions is that if the purchasing power of the unit of measurement doesn’t increase to offset the additional inflation, then you’re not solving anything in fact, you’re putting pressure on the current float to service the demand for the coin and pay for security.

Is another thesis ready to get wrecked?

Then there is the argument that tail emissions are needed because it will keep encouraging new miners to come online to try and secure a piece of that new inflation. As the bitcoin block subsidy dwindles, the transaction fees may be enough, so where does the shortfall to reward miners come in? With increases in fees making the network harder to use or does it come from new inflation?

In addition, the tail emissions might not be inflationary because so much of the bitcoin supply has already been lost, and people will continue to lose bitcoin over time. The idea is that if the perpetual emissions and the loss of bitcoin find an equilibrium, everything should be fine.

But how are you going to find that sweet spot? How are you going to monitor it? This seems like a slippery slope for future interventionist policy rather than an update that you can leave alone and fall asleep for 5, 10 or 50 years.

How about a little inflation?

Finally, there’s the fence sitter argument that everything in moderation is okay, but if we have no hardlines in bitcoin then where do we draw the line? If you can change the hard cap, change the inflation rate, change the issuance rate, then bitcoin loses its value proposition. Once you change the protocol on a monetary level, you violate the property of everyone who signed up based on the old rules, so why would they choose to stay? You’re forcing them to accept inflation that wasn’t part of the agreement when they placed their savings into the asset.

Ultimately none of us knows what will happen to bitcoin, but changing it because something might happen in the future is a non-starter for most owners of the asset.

Put a fork in it?

If we do get to a point sometime far along in the future, where the tail emission crowd gets louder and amasses a certain amount of momentum, it could turn out to be a repeat of the block size war and turn into a bitcoin fork in the road. One would continue with the rules we know and love, and another would decide on having tail emissions, and we would see which network, users, miners, and software developers support.

If tail emissions are the correct move, then the new chain would slowly demonetise the other chain, as we’ve seen with forks that made certain decisions that forced them to split away from bitcoin.

Altcoins are experiments in tail emissions

I honestly don’t see the need for this debate; there are so many coins out there; if you believe that tail emissions are the best way to secure a protocol, why bother with bitcoin? Put your money where your beliefs are and hold the asset, and use the network you believe to be superior. You will either be rewarded for your decision or punished, but at least you took a stance and put your value and productivity on the line for those beliefs.

The infinite wisdom of the market

Bitcoin is meant to be a free market, and miners have to abide by the same rules, regardless of how much they’ve sunk into supporting the network. If they make poor calculations, eat up their runway or have an unsustainable burn rate, they need to either shut down or lean up operations to stay competitive.

The miners who cannot survive fall off the map, and the best operating ones remain, while new ones come online that are willing to compete at the current rate, and so we find a balance. Additionally, as bitcoins’ purchasing power increases, it would offset the loss in subsidy, you might get fewer satoshis per block mined, but those satoshis could give you more runway to operate, so why would you need more inflation in that situation?

Tail emissions encourage miners to sit on their arses and not improve their operations in the most ruthless of fashion and thus making the operations less efficient. If you know you’re guaranteed to get a piece of the inflation pie, then why try harder? Tail Emission would probably generate other inflationary problems that we cannot even predict since the balance between demand and supply is dynamic, and only the free market can establish it.

Value traded and settled in bitcoin

The debate on tail emissions, to me, doesn’t take into account how bitcoin can still expand and be used in the future. If the bitcoin thesis is correct and becomes a settlement layer for other assets, too, people won’t only be settling a few sats on the blockchain. They would be settling deals like redemptions on bonds, real estate deals and using bitcoin to secure finance for loans.

As bigger parties get involved, they make larger transactions, transactions they would be willing to pay high fees for and wouldn’t be bothered. At the same time, the rest of us piggyback on them to fill the blocks. Blocks might have limited capacity, but if you’re looking to secure billions, if not multiple billions, in a transaction in the future, bitcoin would be the most efficient clearing network.

The birds, the bees and the BTCs

To me, this inflation debate feels like something that we will have to deal with for as long as bitcoin is around. A play from the government handbook, there will always be a reason to create new inflation, and people will throw any argument at the wall and see if it sticks.

The tail emission idea contradicts the essence of bitcoin, with respect to the shortage of its supply and its deterministic monetary policy. It’s the narrative that sold many of us to choose this asset to store our wealth and the way we encourage others to join in and enjoy the benefits of the network.

To inflate or not?

But what do you think of the whole proposal? Do you think security needs a budget, or will the market adjust to reward good actors at a viable rate? Is tail emissions another attack on bitcoin? Let us know in the comments below; we love hearing from all bitcoiners.

South African bitcoin pleb falling down the rabbit hole and willing to share every bump, scratch and knock along the way
View more articles from this author
PrevPreviousHow Bitcoin Can Enable Chat-Commerce
Next4 Ways To Use Your Bolt CardNext