What Is Standard Sats?

Home » Articles » What Is Standard Sats? 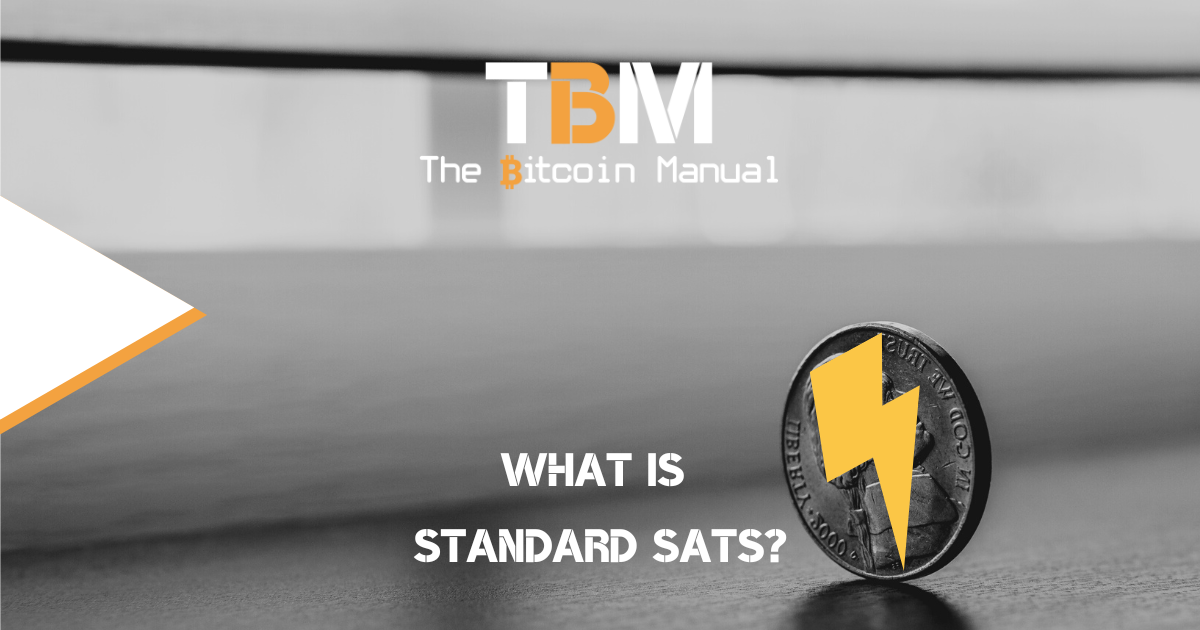 As bitcoin continues to monetise and participants come into the space with different levels of conviction and capital to deploy, bitcoin will continue to be repriced. In doing so, we see massive amounts of volatility. While we’re still in the monetisation phase and will take some time to become a reliable store of value, the phase that is the medium of exchange is still far off in the future.

While bitcoin maximalists have already adopted satoshis as their standard unit of measurement, the vast majority of people are still tied to fiat pricing when conducting purchases. People who don’t have conviction in bitcoin are looking to use money with stable pricing, and so far, bitcoin cannot offer that, which is why stablecoins have become such a popular service both on bitcoin and alternative networks.

To help bridge the gap between bitcoin, the assets as a pricing mechanism, and bitcoin, the networks, and the ability to transfer value, we’ve seen several stablecoin options layered on top of bitcoin.

To name a few.

These are all options users can take advantage of, and they are surely not the last ones to try and bring stablecoins and synthetic assets to bitcoin. Another option available on the Lightning Network is Standard Sats.

What are Standard Sats?

Standard Sats is a service built on the Lightning Network to solve the high volatility of bitcoin against various faith currencies by hedging. It is an independent bitcoin bank for geographically-distributed communities or businesses. The product consists of an open-source protocol client (mobile bitcoin wallet; modified version of Simple Bitcoin Wallet, SBW) and node.

How does Standard Sats work?

The user installs the wallet and establishes a “fiat” channel, which can be replenished with satoshis immediately after installation. The user can always open a regular channel to any Lightning node if required and if he has bitcoins in the wallet.

Upon replenishing the “fiat” channel, the service locks the bitcoin price in fiat currency like USD or Euros, as an example, and then hedges the price volatility by opening a position on the exchange Kollider. The user sees a disposable amount in USD or Euros in the wallet, which does not depend on the bitcoin exchange rate.

Thus, a new bitcoin-derived asset is created, comparable to a personal stablecoin.

How could Standard Sats be used?

How is it different from stablecoins?

Stablecoins are usually issued by a centralised issuer, as is the case of Tether, which has to hold reserves in dollars or assets and issue stablecoins backed by that value. They are fiat money guarantees that require the trust of the issuing bank.

In the case of these synthetic assets, in a broad sense, they do not have a centralised issuer since multiple admins can run the software and the service and the number of synthetic assets is backed by the issuer’s bitcoin balance.

What are a node administrator’s role and risks?

A synthetic asset admin can run Standard Sats software, and this user or entity becomes the host administrator and can earn routing fees in the Lightning network. The entity could provide synthetic asset settlement for wallets or service providers willing to connect with them.

However, there is an element of trust involved when picking an issuer; Standard Sats is only a protocol and is responsible for the actions of the user or the exchange used for hedging. So you accept risk from the issuer and the service they’re using to hedge their positions.

These “fiat” channels are managed by the Standard Sats project by default, and the service administrator can steal your bitcoins. Alternatively, users can install the software on their server to administer the service themselves.

Any tokens stored on an exchange are subject to the risks of hacking or bankruptcy of the exchange. In general, this is called counterparty risk. Unfortunately, you cannot use the capital markets that exchanges provide without this risk.

Assess your risks yourself by deciding to install software and open a personal account in exchange for its operation.

There you have it, another tool added to the Lightning developer kit that could create new options for app builders and add new experiences native to the bitcoin network. While bitcoin will always be the base layer, we must accept that people will use the value locked into the network in different ways to settle payments.

If you would like to learn more about Standard Sats and dive down the rabbit hole, then we recommend checking out the following resources.

South African bitcoin pleb falling down the rabbit hole and willing to share every bump, scratch and knock along the way
View more articles from this author
PrevPreviousBitcoin Is Get A Job Technology
NextWhat Is WebLN?Next