How To Protect Yourself Against Chain Analysis

Home » Articles » How To Protect Yourself Against Chain Analysis 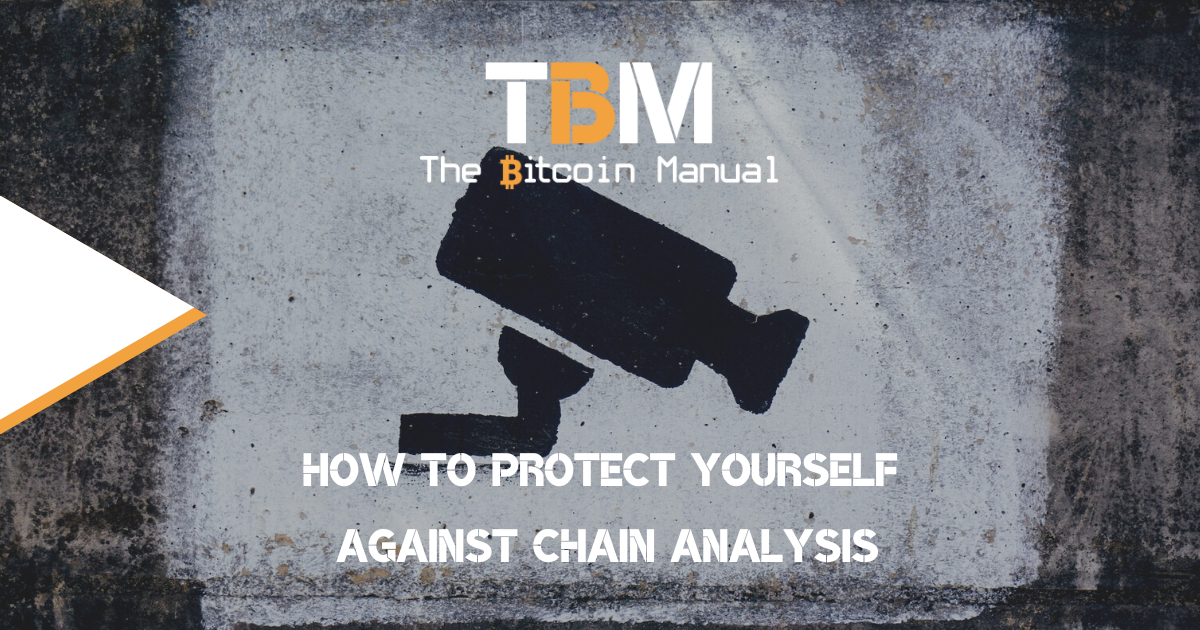 On-chain analysis refers to the surveillance of the data recorded on the bitcoin blockchain. While there is nothing special about reviewing and verifying on-chain data, anyone with a full node can do that in a pseudo-anonymous fashion.

On-chain analysis metrics were first used to give traders and investors a bird’s eye view of the bitcoin network. It was often used in research reports that track the health of the network, activity of the network and network growth, among other metrics.

As the bitcoin network grew, the desire to match up massive amounts of value with personally identifiable information has skyrocketed. If you had 1000 bitcoin ten years ago, no one would care who you are or what you do with that purchasing power, but as bitcoin’s purchasing power increases, decrypting who owns that bitcoin becomes more valuable to a host of institutions.

There are several services out there that analyse the data stored on the blockchain and overlay it with additional metadata it secures from other data providers such as financial institutions, centralised exchanges, social media profiles and much more.

These firms grab, process and categorise data from the chain, such as:

Pulling this information from the chain seems harmless. Still, when you can overlay it with exchange balances, citizens’ IDs, phone numbers, social media accounts and even physical addresses, you can quickly build a $5 wrench attack list that puts many people in danger.

If you’re using the bitcoin blockchain, you can be assured that your transactions are being tracked by several third parties. While the balances might not be explicitly tied to you, assumptions can be made, and it is up to you to make the guesswork a little harder to maintain your privacy.

Use new addresses to receive payments.

To protect your privacy while using the bitcoin network, you should generate and use a new bitcoin address each time you receive a new payment. Instead of creating a track record with one public address, you create multiple, all with one transaction, making it harder to follow where your funds are flowing to and coming from.

Still, you will know through your wallet management interface.

People who send you money cannot see what other bitcoin addresses you own and what you do with them. This is probably the most important advice you should keep in mind.

Doing so allows you to isolate each of your transactions in such a way that it is not possible to associate them all together. You don’t want to be using the same wallet to accept public donations as the one you use to store purchased bitcoin from exchanges, or people could track funds going in and out of that address.

If you’re not used to generating new addresses or using an X-Pub to create multiple addresses on the fly, then having separate wallets is still a step in the right direction and improves privacy.

Because the bitcoin network is a peer-to-peer network, it is possible to watch for transactions’ relays and log their IP addresses. Full node clients relay all users’ transactions just like their own. This means that finding the source of any particular transaction can be difficult, and any bitcoin node can be mistaken as the source of a transaction when they are not.

If you’re using a third-party node, you might want to consider hiding your computer’s and mobile device’s IP address with a tool like Tor so that it cannot be logged with the wallet provider’s list of addresses.

If you can find P2P exchanges, Bitcoin ATMs or KYC-free services that allow you to buy bitcoin, you should take advantage of it. While you can still purchase on a regulated exchange, using a non-KYC service allows you to acquire more bitcoin that is not tied to you.

While there is always a record of a certain amount of purchases with centralised exchanges, you could build up a hidden stack of bitcoin with no history or personal links to you.

If you purchase bitcoin from KYC and AML-regulated institutes, you must accept that there will always be a record of bitcoin purchases tied to you. A record that can make its way into the hands of governments, financial institutions or even criminals.

No database is safe from being hacked or leaked, so it’s important to add some distance between the initial purchase and where you hold your bitcoin on-chain. Once you’ve taken custody of your bitcoin into a hot wallet of your choice, you can then look at options like CoinJoins to help muddy the waters.

Alternatively, you could purchase bitcoin on the Liquid or Lightning Network, and later submarine swap that to a new on-chain address and into your cold storage or add another CoinJoin for additional obfuscation of your funds.

While you won’t be able to deny buying and owning that bitcoin, you can hide where it is kept because the public address used to for the initial extraction has no relation to the new public address you’ve used to hold your mixed coins.

Don’t mix your non-KYC stash with your KYC stash.

If you are buying both KYC and non-KYC bitcoin for the love of all financial privacy, do NOT send your non-KYC bitcoin to a public address that has received KYC bitcoin. Yes, I know it’s easy to re-use an address, but now you’ve effectively rendered the point of buying non-KYC bitcoin useless.

Anyone can check your public address and see that there is a bunch of bitcoin in there with some of it tied to you and can likely assume that you own the rest since you hold the signing keys to that public address.

Again, if you don’t know how to manage public addresses or don’t feel comfortable with it, rather set up two different wallets and stack your private bitcoin separately.

Posting your bitcoin address on your website, social media account, or any public forum might seem harmless, but it can reveal more than you would want the public to know. If you’re using and re-using the same address for convenience’s sake, you not only allow anyone to view the history of bitcoin going through that address but follow where that bitcoin goes afterwards. The more UTXOs sent to a single address, the more that address can expose future addresses or where funds go to, such as exchanges or other businesses with known public addresses.

As mentioned earlier, you should always use a new address when handling your bitcoin, but for public payments, this can’t be practical. If you want to accept payments from the public, you can opt for creating a PayNym, setting up a BTC Pay Server on your full node to generate an address for each payment or using a Lightning address instead.

Running a full node might seem needless, but if you’re looking for additional privacy, it becomes a valuable tool in your arsenal. When you move funds from an exchange to a wallet, be it a software hot wallet or a physical signing device, you’re likely using their node as a default to broadcast the transaction.

When you broadcast via the exchange or a wallet node, you’re linking your address, wallet type, device, and IP along with the exchange or wallet provider. Instead of running your own node, especially over Tor, will give you a lot more privacy by masking your IP and ensuring people don’t know what wallet you’re using or tying the public address to a certain wallet provider.

Have you been using bitcoin privately to mask your on-chain footprint? What is your preferred method of masking your transactions? Which app is your favourite? Have you tried all the forms of privacy payments? Which one do you prefer? Do you have any tips for keeping chain analysis in the dark?

PrevPreviousWhat Is Shitcoin Exit Liquidity?
NextWhat Is The Bitcoin Float?Next