What Is Shitcoin Exit Liquidity? 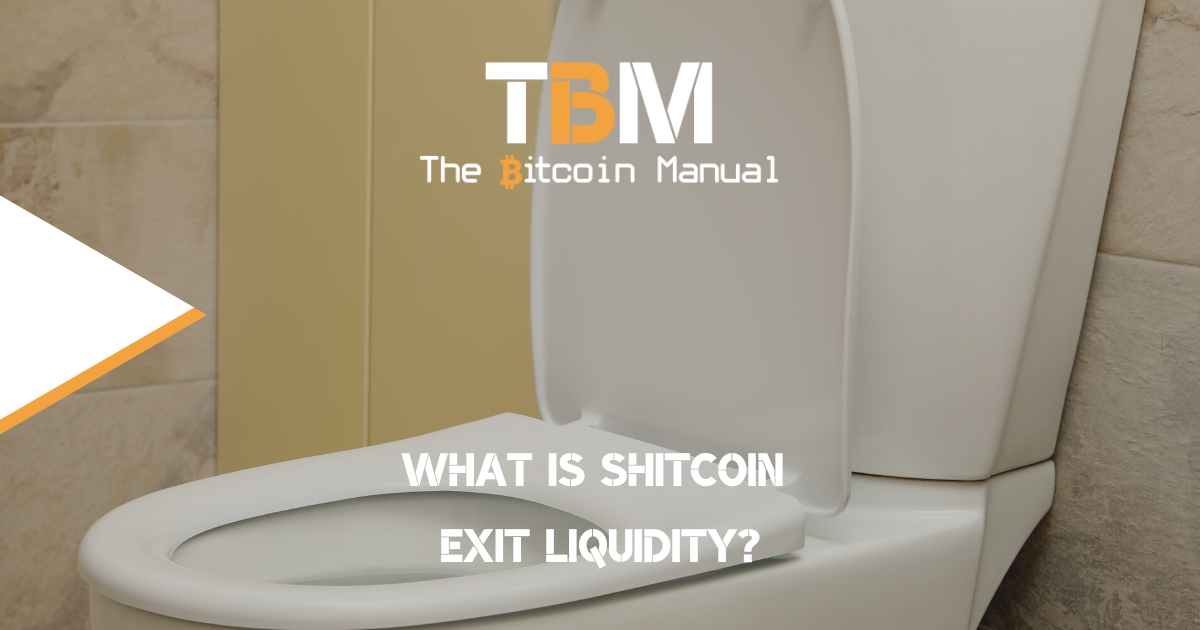 We’ve all heard of or even participated in the standard ‘pump-and-dump’ scheme. The premise is simple, ‘dumpers’ create or hold a particular asset, in this case, a token, and use their influence or purchase influence through other personalities or institutions to hype up demand before aggressively. As people hear about the token and the false promises that come along with it, the issuers and early siders sell their positions into that artificially drummed-up demand.

During dumping, sellers are incentivised to release the supply slowly to maintain the price and encourage others to get in while encouraging the new owners to hold it. As the price remains stable or trends slightly upward, it provides a false sense of confidence and allows you to unwind more of your position.

Since your cost basis is near zero as an insider or issuer, you aren’t too concerned with the price you sell for, but you have the incentive to acquire as much money as possible.

Eventually, the supply offered by the dumpers seeking to squeeze out every penny dominates demand, or the dumpers are impatient and clear out the buy side of the order book. The price crashes to zero or near zero – pump-and-dump completed.

The nature of the pump-and-dump scheme is such that profits are created while killing the token in the rug pull. Some consider a pump and dump the scheme mentioned above over a short time frame, but a pump and dump can last for years if it remains profitable to promote to new users. Since the success of the pump-and-dump is determined by how much exit liquidity you can make.

What is exit liquidity?

Exit liquidity refers to the poor unsuspecting investor that trades their money for a promissory token with no value. When you become exit liquidity, it means you are left with a token you can never sell or unwind from the position while the issuer of the token sells it at several multiples more than it costs them to mint the token.

There have been several popular schemes over the last few years that are designed to lure investors into the space only to become exit liquidity.

The first time pump and dumps went mainstream was once Ethereum launched and allowed anyone to copy and paste a smart contract, run it on their EVM and attach a token to their DINO project. All you now had to do was decide on how many tokens you wanted to issue, set a “pre-sale” price and provide a creative reason as to why your exit liquidity should hold your token instead of their bitcoin or stablecoins.

Once you secured your initial ICO liquidity, you could call it quits here, but if the pump and dump are oversubscribed at the pre-sale stage, you could get it listed on some centralised or decentralised exchanges and slowly drip out your remaining supply and pick up some additional capital for an exchange listing and an extra bit of work.

As for delivering a product? Why do that? You’ve already been paid, so what incentive is there to release a product?

Eventually, the ICO bubble popped, and if you wanted to get serious about making a return for your pump and dump, you now needed to create an MVP product. Once you create the product or service, instead of accepting bitcoin, stablecoins or slapping on a fiat payment processor, instead you add a utility token.

Under the guise of building a product, investors are lured into believing that if they get in early once the product reaches “mass adoption”, their share of the utility token pile will be so valuable. People will want to use this service as customers, and because you hold a large portion of the only way to pay for the service, customers would need to pay you for your share of the coins.

That’s the thesis, but in reality, you were duped into being exit liquidity for a half-backed product that is never going to go anywhere.

The L1 rotation thesis is based on the idea that one blockchain will scale to rule them all, and the ones that are currently in the works have made certain mistakes in their code base that limit their ability to scale.

The L1 rotation thesis heavily leans into the narrative that first adopters are the “MySpace”, and my project will be the “Facebook”, so invest now, and we will have enough funds for this blockchain to overtake the current ones and grab their market share.

That’s a nice story, but in reality, you’re only paying for a fork of Ethereum that happened to spin up its own native token and run it n AWS or Google Cloud. Since there is not as much lag with a smaller user base and no decentralisation, the chain works well on launch.

A good launch is all you need because the coins you minted for nothing can now flood the market, so people can try using your chain and the various gambling applications that require your native token. Once you’ve secured a solid multiple for your printed-out-of-thin-air tokens, dump the devs and basically run the project in maintenance mode, no sense in letting it cost you more than what you can drip out in long tail exit liquidity.

As the amount of pump-and-dump returns started to slow down as burned, investors remained on the sidelines or refused to fall for the same pitch. Now the schemers creating these tokens needed to think of a way to reduce the current token supply. So they took a page out of the utility tokens book; since people liked to hold the token thinking they could get access to something, why not give them that, only instead of a product? Just give them access to more of your token, thus the introduction of staking.

Since you printed it up out of thin air anyway, it costs you nothing, and since you don’t need to mine it, it costs you nearly nothing. All you need to do is allocate those funds to the staking pool and figure out an APY that is attractive, and boom, you have some exit liquidity.

You now create a situation where users are not only encouraged to buy the token but to hold it and not compete with you for selling. No, they should stake it and earn inflation and let you, the issuer be the seller of last resort who can gobble up all that exit liquidity without competition.

The DEFI space has been the latest in the long line of exit liquidity mouse traps that have been able to separate investors from their bitcoin or stablecoins.

The yield farming platform will often offer users teaser rates with insanely high APRs encouraging you to buy the token to gain access to those returns. You will need to hold, stake or pair that token in their platform to access the interest rates. However, being able to sell that position in the future remains a dubious proposition.

The yield farm then pockets the bitcoin and stablecoins, and you’ll be stuck with a token that reduces in demand as those fake yields lower over time, and with that comes fewer buyers, so there is less chance of you ever unwinding that position at a profit.

The algorithmic stablecoin is the latest version of reskinned pump and dumps with a convoluted business plan backing its need for you to buy the coin. Terra used a combination of Luna supply control, the psychology of the dollar, and guaranteeing high yields secured with their own pre-mined tokens to create sustained exit liquidity.

Whether intentional or not, the Terra dollar (UST) worked as the perfect exit liquidity in what can be described as a prolonged pump-and-dump scheme. The Terra failure is simply an example of how complex these pump and dumps are becoming, and the lengths companies are willing to go to, to avoid creating a real product, but requesting real money from real people.

The Terra Ecosystem began as a sinking cruise ship, the captain and distinguished guests knew it but fled in superyachts, leaving most passengers without lifeboats.

Crypto companies will never cease in their ability to rebrand the pump and dump, and with a new batch of naive investors coming into the space each year, there is a growing incentive to always come up with some weird and wonderful narrative game to trick honest people out of their money.

Cryptocurrency has been and always will be a mixture of degen trading, gambling, scammers, and pump and dumps conflating themselves with the one legitimate innovations here, and that is bitcoin.

If you are not the issuer of the coin, an insider, or you can secure cheap OTC pre-mine allocations, then it’s best you stay away from any of these coins, for you will be someone’s exit liquidity.

Have you been had?

Have you been someone’s exit liquidity in the past? Which project was it? What narrative got you to believe a shitcoin sales pitch? Let us know in the comments down below.