The Bitcoin Losses Will Continue Until Self Custody Improves

Home » Articles » The Bitcoin Losses Will Continue Until Self Custody Improves 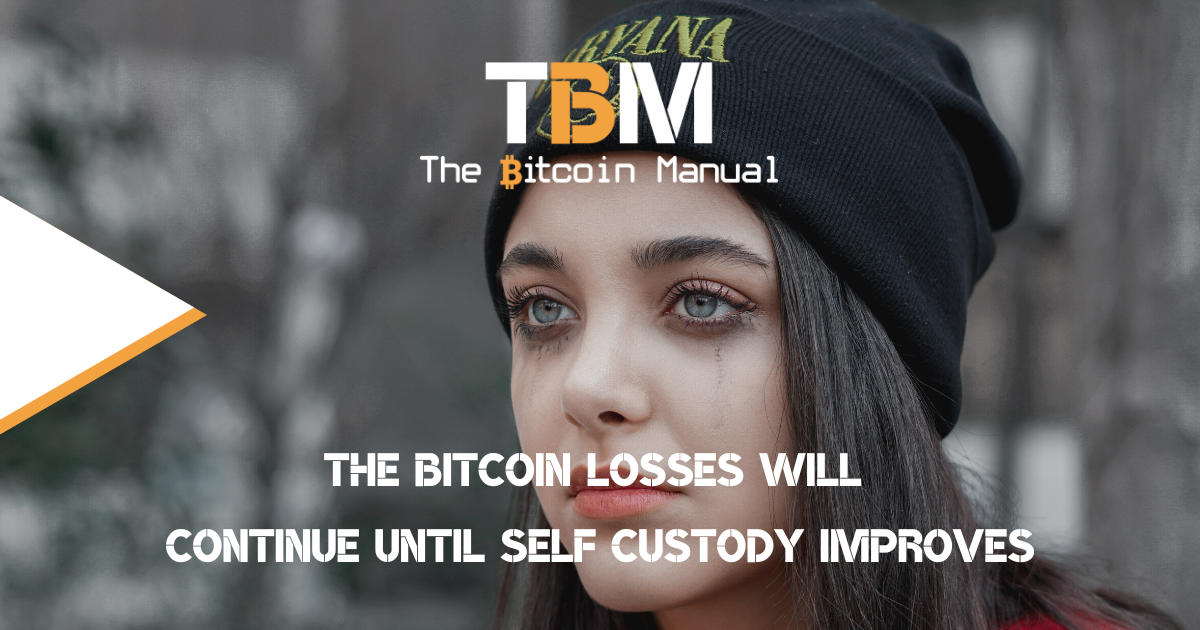 Each bitcoin bull run brings with it a host of new users, traders, capital and even more speculation; in a risk on market, where everything you do seems to result in improved paper returns, it only encourages investors to take on more risk. The longer the market trends upward, the more people think it’s a sure bet and continue to pile in, but that also leaves these same investors exposed to major corrections.

During each one of these bitcoin boom and bust cycles, we see people who don’t take self-custody of their funds, end up feeling the maximum pain. When you take self-custody, you eliminate third-party exposure and risk. You make it harder for scammers, grifters and hackers to get a hold of your funds, as you put a personal walled harden around your funds.

Since bitcoin is such a finite asset, there are only a few ways you can acquire it. You can mine it, work for it, buy it or scam it out of others. As you can imagine, as bitcoins value rises, the number of scams to get you to part with your bitcoin continue to rise and improve in complexity.

It may sound like I am preaching, and perhaps I am, but I do so off the back of my own experience where I got punished for my negligence and lack of prioritising the security of the funds I acquired.

When I first got into bitcoin in 2016, I left funds on exchanges, and I got punished for it; my account was compromised, and the funds drained. No one was there to help me, and I was on my own, and it was my fault.

It’s a painful lesson to learn, but one that I think would have cost me even more had I not learned that early in my bitcoin career. Naturally, after being burned, I dived into self-custody, and that’s when I realised that cold storage was one of bitcoins’ killer apps and cannot be understated.

I’ve been through the cycle myself a few times, and I’ve learned my lesson the hard way. I try to warn those I come into contact with, but I’ve come to realise a lot of people will only learn from having a similar experience as I had before waking up to the need for self-custody.

Funds should be cold, not frozen

Watching this latest deleveraging as a spectator this time, reading the horror stories all over social media can be heartbreaking. There is no shortage of people losing their money in certain crypto Ponzis or having been locked out of access to their funds because companies in the space didn’t understand that fractional reserve banking doesn’t work if you don’t have a buyer of last resort to bail you out.

Now that retail starts to feel the pain of trusting third parties and paying the price for not calculating risk, some will eat losses, others will try litigation, and a tiny few will realise that cold storage is the only solution. Cold storage might be a bother to set up, and it might be a pain to access your savings if ever you need them, but it sure beats getting declined by a third party for your access to your money.

In the current climate, we’re still only focusing on the platforms and services that have blown up, but very few are taking a critical look at those that are still in operation. To me, I see plenty of attack vectors on self custody can solve.

Convenience is an attack on self-custody

If you’ve ever spoken to anyone about bitcoin and explained how you self-custody your funds, you’ve probably been hit with blank stairs or a response that can be summarised as what a shlep that is, and they probably won’t be interested in it.

Wallet options and signing devices in bitcoin have come a long way over the last decade, and there is no doubt they will improve, but they will have their limits. There are physical barriers that cannot be overcome with software and people need to accept that.

Learning how to take control of your funds needs to become a habit, and realising you are the be-all and end-all when it comes to your bitcoin. There are no do-overs, no roll-backs and no customer support; you make a mistake, you will pay for it in losses of bitcoin. Personal responsibility cannot be taught regardless of smooth the user experience becomes.

ICOs and tokens are an attack on self-custody

We’re in the phase of hypertokenisation; the business model of printing your own money and trying to exchange it for bitcoin is pretty good. All you need to do is spin up a token with a clever story and either convince retail holders to trade their bitcoin for your token or to trade fiat for your token you spun up for next to nothing.

While they hold the token, you take those profits and lock them into bitcoin; that’s all cryptocurrency is; they are leveraged plays on bitcoin. Creating an abstract environment of musical chairs where you enter with fiat or bitcoin, and they leave with what could have been your bitcoin.

When you trade bitcoin for one of these tokens, you sign over rights to that bitcoin and instead get a digital claim on possible future bitcoin.

DEFI are an attack on self-custody

As the token merry-go-round started to lose its shine, the bitcoin parasites came up with a new narrative, the idea that bitcoin yields nothing while sitting in self-custody. Now it’s all about interest rates and returns, and again, this is all a narrative to put your bitcoin at risk.

Yes, bitcoin doesn’t generate a return when it’s locked in cold storage, but you’re able to enjoy price appreciation of the asset when you hold it in cold storage. However, greed is a funny old thing, and the crazy interest rates offered in DEFI have tempted many to risk their bitcoin.

Instead of only having to sell your bitcoin for a certain token, this time, you can pair your bitcoin with another token, but the fact that you sign over custody of your funds is a problem. Most of these popular DEFI products do not make use of multi-sig but wrapped bitcoin where you really only have a paper claim to bitcoin.

Additionally, you can suffer from hacks, implement loss, flash loan attacks, and rug pulls, and you’ll have to manage your positions actively.

CEFI are an attack on self-custody

CEFI platforms pretend to be banks; they claim they can ride the volatility of the markets, and if you entrust them with your funds, you can get a steady income. The goal is to bash self-custody and get you to put your bitcoin at risk. You need to sign over custody of your bitcoin to a third party and hope they honour your claims when it comes time to call back that collateral and your earnings.

If you’re still using altcoins or stablecoins, you’re probably using a multi-asset wallet, to make managing your funds easier. It might seem like the wise choice, but you’re putting your bitcoin at risk. Remember, the more assets a wallet manages, the more networks it needs to communicate with, the more code is added to the wallet and the wider the attack vectors and risk of potential vulnerabilities.

Additionally, altcoin self-custody isn’t exactly as safe as bitcoin, so you’re putting the most pristine asset at risk, all because you want to manage other coins that aren’t all that safe. We’ve seen plenty of examples where multi-asset wallets have exposed or signed over their seed phrase because of interactions with applications.

If you still feel the need to hold on to these tokens or stablecoins, It would be wise to separate them from your bitcoin holdings and spare no expense to keep your bitcoin safe.

Having seen the events that have unfolded over the last year, I have very little hope that people will realise that self-custody is far more valuable than trying to risk your capital. What is the point of netting 5, 6, 10, or 20% returns on your capital when you could get none back? Instead of taking your funds and heading back to the casino, you could take that purchasing power off the table, lock it up and wait for a time when you need to deploy it for something you really want or when a good opportunity comes along.

Bitcoiners have come to this realisation and continue to stack the sats they can through bitcoin mining or fiat mining, while the normies will still feel that the casino is their best bet.

Once the dust settles and the CEFI lenders who survive to get back to marketing to new retail, once DEFI protocols get more VC funding to subsidise returns, once the new tokens of this cycle roll out, we will the cycle repeat once again.

Your self-custody can always be improved

Even if you start with only spinning up a bitcoin-only hot wallet, I would say you’re greatly improving your self-custody as compared to holding it in a smart contract, a browser-based wallet or a centralised platform. Consider the hot wallet your first venture into self-custody, and as you become more comfortable with the concept, you can start upgrading your setup.

You can move to cold storage, then add additional security measures like multi-sig, distributed keys, lay on deadman switches, duress passwords and engrave your seed phrases.

The path to self-custody isn’t simply spinning up 12 to 24 words, but it is the first step.

South African bitcoin pleb falling down the rabbit hole and willing to share every bump, scratch and knock along the way
View more articles from this author
PrevPreviousBitcoin App: Final Message
NextWhat Is Greenlight By BlockstreamNext