What Is Greenlight By Blockstream

Home » Articles » What Is Greenlight By Blockstream 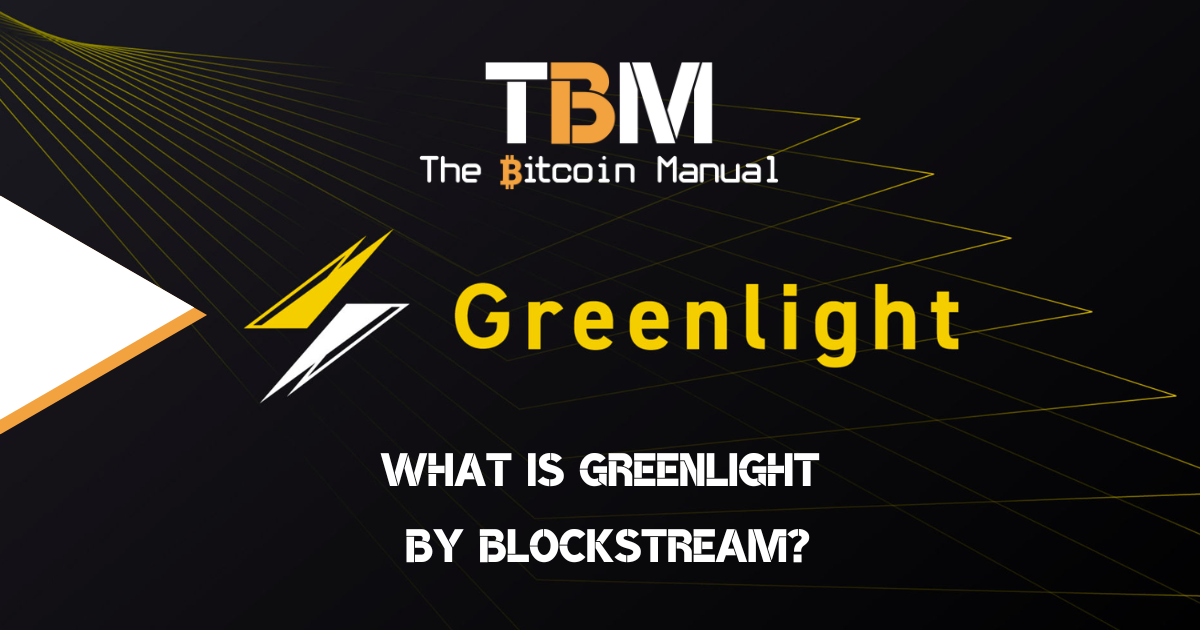 Bitcoin is all about learning and experimenting. With second-layer solutions like the Lightning network, we have a new playground for app developers, hobbyists, privacy advocates, investors and bitcoiners to sink their teeth into and play a more active role in bitcoin.

Running a Lightning node isn’t as easy as a standard full node; it requires a more hands-on approach and for you to remain online at all times, especially if you’re actively supplying liquidity and routing payments.

In some cases, it might be a practical issue, as in my situation where power outages for 2 – 6 hours are a regular occurrence, and even with a UPS, you’re not going to have the most reliable node. Another need for quick node access coming in handy is if you simply want to experiment or get a feel for lightning nodes and what they have to offer before you go out and set up a dedicated device to run one for yourself.

Getting started with the bitcoin Lightning network can be challenging, particularly when learning how to keep funds safe and private. Onboarding Lightning adds another layer of complexity because of the need to operate channels and liquidity and manage backups and watchtowers.

Having to manage all these tools from the start can be daunting and is the reason many new users often opt for custodial services where these technical challenges are managed for them but at the cost of trusting the service operator with their funds.

Now custodial services have their part to play in the ecosystem of that; there is no doubt. Still, if the gap between custodial and non-custodial is too far apart, very few will bother to bridge the gap, and that’s why we need services that can onboard users in an easy and low-cost manner.

This is where a tool like Greenlight aims to act as the training wheels for new Lightning users.

Many people prefer custodial services, who manage the technical side for them, but do so at the cost of trusting the service operator with their private keys. At Blockstream, we think there’s a better way with Greenlight, which lets users operate a node while also having control over their private keys and bitcoin, leaving the intricacies of node operation up to the professionals.

Greenlight is built on top of c-lightning, an implementation of the Lightning Network protocol optimised for performance and extendibility. The use of c-lightning results in very low operational costs. The savings are passed on to its users. It also enables sharing of a single node among any number of front-ends. This saves on-chain fees for the user and reduces the fragmentation of funds.

The private keys for both on-chain and off-chain transactions never leave the custody of the user; rather, users interact with their nodes via a simple user interface managed by Blockstream.

Why the need for Greenlight?

Greenlight allows anyone to boot up their Lightning node on our cloud infrastructure in seconds and take full control over their funds. The user leverages their own set of private keys, which is required to sign both on-chain and off-chain transactions, and never leaves the user’s device.

Users interact with the node via a simple programmable interface, and Blockstream takes care of the technical management of nodes on their infrastructure when needed, managing everything from the bitcoin back-end to encrypted backups and watchtowers.

Greenlight is user-friendly and educational for potential Lightning users or hobbyists. Some developers are hamstrung by the fact that they are unable to run their nodes. Greenlight is intended to break that barrier and allow for more development.

As a user-friendly option, Greenlight is an educational tool for novices to learn the ins and outs of the network. Once users are knowledgeable enough, Greenlight offers the option to export nodes and load them onto alternative platforms. Greenlight also aims to equip everyday developers and incentivise building Lightning-enabled apps by removing the barrier of having to be a node operator.

Your keys, your coin

While we provide our expertise in Lightning Network node management, you retain full control over your bitcoin. Your keys are stored on your device and never touch our infrastructure.

Only use your node when you need it. Done sending #unfairlycheap payments for the day? Your node automatically shuts down, so you don’t incur unnecessary costs.

Get started building that awesome new Lightning app without learning all of the quirks of Linux operating systems, hosting providers, etc.

One of our main goals for Greenlight is to make onboarding users to the Lightning Network as easy as possible. You shouldn’t need to become a DevOps ninja to get started with Lightning.

The lightweight Core Lightning node implementation is used to power Greenlight, which means we can provision Lightning nodes efficiently and pass those savings on to the user.

The roll-out of Greenlight

The service is available on the Sphinx and Lastbit Lightning payment apps and will be released to the public over time. During this rollout period, Greenlight will be free to use.

Blockstream says that users can expect a wide range of new features implemented in the short term, such as automatically proposing channels, liquidity rebalancing, and swap services.

While they roll Greenlight out, users can access the service for free. As it expands, Blockstream has stated that they will operate on a fee-based model tied to how active you are routing payments.

There you have it, a detailed breakdown of a new way to run lightning nodes that might be a better option for those who only want to play around and get a feel for it before committing to running their own hardware and going fully non-custodial in their Lightning experience.

If you’d like to learn more about the app or give it a try.

South African bitcoin pleb falling down the rabbit hole and willing to share every bump, scratch and knock along the way
View more articles from this author
PrevPreviousThe Bitcoin Losses Will Continue Until Self Custody Improves
NextDIY Hardware Wallets With SeedSignerNext