Self-Custody Maximalism On The Rise 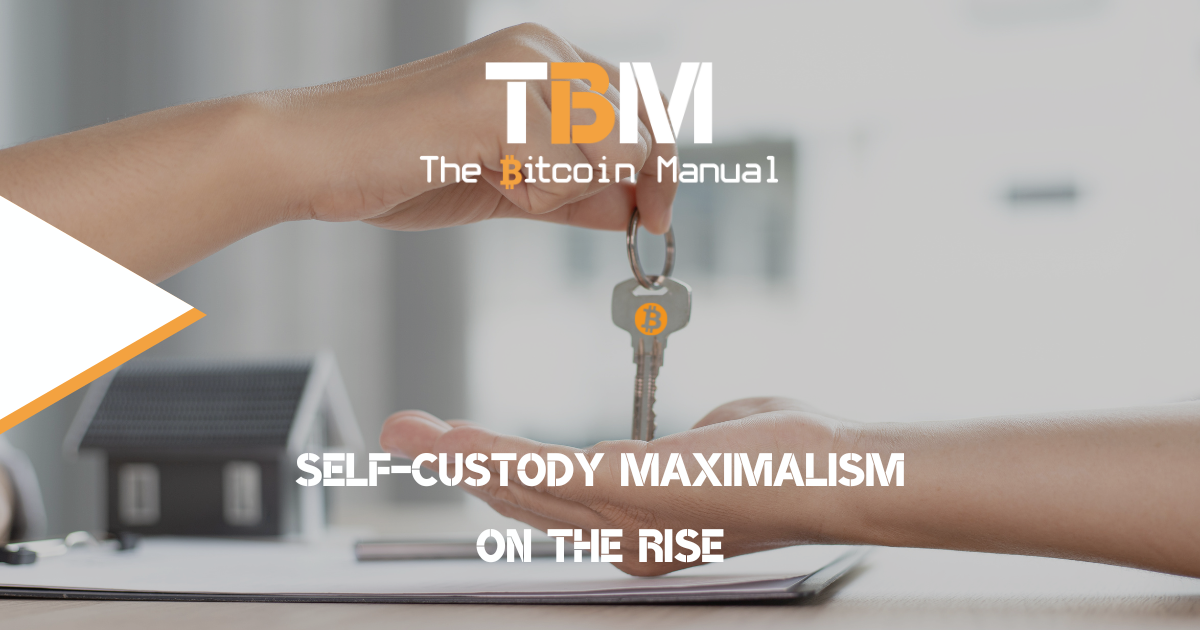 Although the extreme viewpoint of Bitcoin Maximalism is “1 Bitcoin = 1 Bitcoin”, the vast majority of people in the space always look at “1 Bitcoin = current £ price”.

As the fiat price of Bitcoin goes through its bear market and bull market cycles, we see companies and exchanges come and go, which leads to people losing coins that are left on these platforms.

The unfortunate side effect of that means people can lose meaningful amounts, leading to understandable bitterness about the space, manic fear and in some sad cases, suicide.

With recent events in the 2022 bear market involving freezing accounts in certain popular lending apps, this problematic reliance on 3rd party custody has been highlighted once again.

Everything’s OK Until It’s Not

I can only go from observations and my own experience but it seems like the sentiment of “that won’t happen to me” prevails in those that feel it’s fine to hold funds for an extended period with 3rd party platforms.

Even with Bitcoin focused exchanges, you’re putting your sats at risk if you leave them on there. They could tweet saying everything is fine one day, then shut down the next, citing “market conditions” instead of shady business practices.

Then what will you do? The coins aren’t yours after all.

Most of these companies have some clause in their terms and conditions saying that you don’t own the asset once you deposit it in the platform so good luck getting it back.

If You Don’t Self-Custody, You’re Missing The Point

This is why you need to learn to self-custody and don’t engage in any funny business that could jeopardise your stack such as leverage trading.

With the advent of cold wallets and lightning wallets, holding on to your coins for the long term is a lot easier than it had been in the very early days when Bitcoin was first released.

There really isn’t an excuse not to self-custody now, laziness and an unwillingness to learn will teach you a lesson anyway.

When you send that first transaction to your own wallet (and have got over the nerve-wracking wait for confirmations), seeing those sats appear is an empowering feeling.

Those are yours and no-one can take them from you unless you give away your private key.

Bitcoin was created as a digital peer-to-peer cash that could be sent across the world without barriers. A new monetary system to rival our current government-controlled fiat which puts the ownership back in the owner’s hands.

By leaving your sats on 3rd party platforms, you’re missing the point of it. Like how you leave money in the bank, there’s no reason to think your money is safe there, especially with bail-ins.

Sure, you might think it’s safe because there is an “insurance” that covers the majority of what us plebs will ever be worth.

However, back in 2008 I remember the Northern Rock bank run which meant that customers weren’t able to get their life savings out in time before the bank collapsed.

Of course, the FUD from mainstream media didn’t help either, leading to more and more people queuing up, withdrawing more money until there was nothing left.

These bank runs are also seen in the Bitcoin world and the recent example was that of Celsius Network where customers started withdrawing funds en masse, forcing the company to freeze withdrawals.

By taking your coins off exchanges and 3rd party platforms, this may well lead to a bank run as the companies become illiquid and their supplies run low.

If this happens, it could have a knock on effect of freezing withdrawals and eventual insolvency, meaning all you’re actually left with is just an IOU on screen that you don’t own.

Run Your Own Bank

With the recent events and murmurings of other potential liquidity crises hitting lending and exchange platforms, it feels likely that more people will look to be self-custody maximalists and take their coins rightfully in to their own hands.

Each halving cycle, there seems to be an event that leads to strong learning lessons about what Bitcoin is all about.

Applying fiat tactics of using it to borrow against has ended badly for some as whales dictate the fiat price by causing liquidations. This is not why Bitcoin was created and it just gives fuel to salty nocoiners and permabears which damages the image of the industry.

Ultimately, Bitcoin is a new money system. We don’t know where it’s heading but when there’s only going to be 21 million Bitcoins in existence, why wouldn’t you want to own a little piece of it yourself?

Have you lost coins from failed exchanges or had your withdrawals frozen? What was the event that made you a self-custody maxi or have you always held your own keys? Let us know in the comments below!

British bitcoin pleb falling down the rabbit hole and willing to share every bump, scratch and knock along the way
View more articles from this author
PrevPreviousThe Dangers Of DEFI Loans
NextHow To Delete Your Voyager AccountNext