Why Bitcoin Becoming Boring Is A Feature, Not A Bug

Home » Articles » Why Bitcoin Becoming Boring Is A Feature, Not A Bug 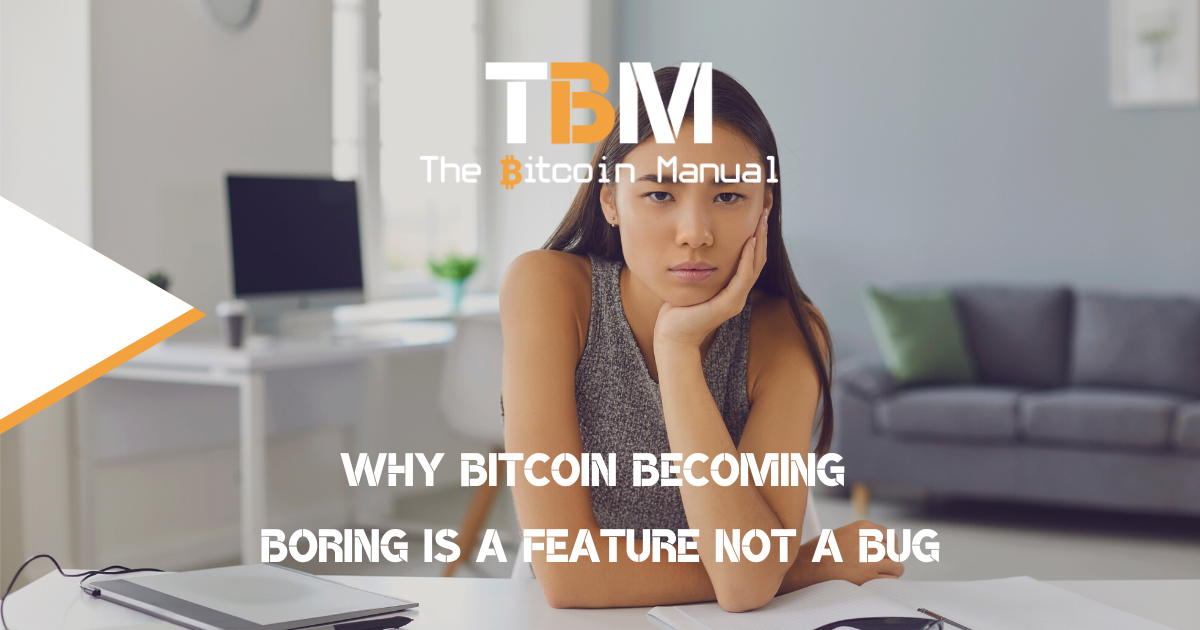 Bitcoin markets still have many puzzles for us to solve, and anyone who tells you that they have it all figured out is either lying or naive and will be humbled by the market sooner or later. With each passing year, we’re beginning to learn more about this parallel monetary system and its effects on participants in the network and how competing networks respond.

When you first get into bitcoin, its’ most likely due to its “Number Go Up Technology” and the promise of netting a healthy return for your capital in a short period that is the bull market. This greed-driven perspective on the market has many investors obsessing over the fiat price of bitcoin.

Instead of focusing on earning a living through work and being productive, time is spent or rather wasted checking the bitcoin price, following online sentiment and news, looking at charts, listening to influencers who likely have no market edge and trying to capture someone else’s capital the commit to the market.

Well, none of us knows, but we can make some predictions.

One narrative has been that when inflation runs rampant and governments confiscate private wealth, bitcoin will be a vital refuge. It increasingly appears that this story is wrong. Despite plenty of currencies continuing to depreciate faster, bitcoin has yet to take hold as the “flight to safety” trade for most people.

Bitcoin is still seen as a “risk asset” due to its volatility and its tether to the scam circus that is the altcoin market. If bitcoin is to attract the “conservative” investor who only looks to save instead of speculate on price, it needs to become “boring.”

Let’s look at how bitcoin could become “boring” and why that is a good thing.

A lot of the volatility and noise comes from the altcoin market, where scams and poorly architectured networks eventually meet their demise. Since the launch of the first altcoin, we’ve seen over 20 000 of them spring up, and thousands have already failed.

Altcoins are disappearing so rapidly that sites appeared in an attempt to track such tokens.

Altcoins tend to rely on marketing and the promise that they can produce an improved technology when compared to bitcoin, and to do this; there are plenty of trade-offs that are exposed with time. While altcoins might seem “exciting” compared to the “boomer coin” bitcoin, there is considerable risk that isn’t properly understood in these projects and the altcoin market overall.

As altcoins fail, the participants who once believed in these failed endeavours become bitcoin maximalists and dedicate their remaining capital to bitcoin. While bitcoin might be considered boring, its predictability and verifiably is the key to providing refuge for those who have been harmed by speculation in the altcoin market.

As bitcoin continues to prove itself as a reliable network, altcoin holders become bitcoin and deploy their capital to the bitcoin market; this is true of retail and institutional investors. When more investors are committed to acquiring bitcoin, it provides an increase in demand, so when bitcoin does drop in price, more holders are willing to capture that lower price to add to their position.

This increase in liquidity means larger trades can be settled in bitcoin, attracting larger investors to take a position.

Improved liquidity can also result in price dips becoming shorter as more capital looks to flow into bitcoin and acquire it at the lowest cost basis possible. If the dips become short-lived and bitcoin recovers over shorter periods, this “boring” aspect of bitcoin could attract savers since they feel their downside is lower.

Bitcoin is known for its volatility; prices can move drastically because it is influenced by a range of factors on a global level. Bitcoin is affected by supply and demand, investor and user sentiments, government regulations, and media hype in all countries.

The bitcoin market matures each year, and as the network shows no sign of going anywhere, improvements come on various fronts.

The more reliable or “boring” bitcoin becomes, the lower the volatility in the secondary markets where bitcoin is traded for fiat.

Another big pain point holding back bitcoin usage by the average person is the current fee market, which very few understand and can be unpredictable when more people join the network. The fee market on-chain is a result of demand for block space which is a limited resource and when a limited resource meets growing demand, so does the price to acquire that resource.

Scaling is a real problem for the bitcoin network, and plenty of effort has gone into creating second-layer solutions with different trade-offs. As more of these second layers come online and communicate with wallet software, we might see a more dynamic fee market and better value routing.

We’ve seen this work well through the Lightning network, where the wallet picks the best path towards the person you need to pay. If this methodology can be applied across all second-layer networks along with the base chain, loads can be balanced, and fees might not be subject to too much fluctuation.

Right now, many bitcoiners are taking it upon themselves to optimise their use of the chain or second layers to acquire the cheapest transfer cost. Still, we can’t expect every person on the planet to want to do that when making transactions.

If this aspect of bitcoin becomes “boring,” it makes transacting with bitcoin easier and more attractive for the average person to use.

Why speculate when you are a market participant

If we get to a point where volatility is lowered to a tolerable range, using bitcoin as a unit of account for pricing might become more palatable. Merchants will not need to update their pricing or set pricing in fiat instead but could price directly in satoshis. If pricing doesn’t move much or very often, it also makes bitcoin an attractive method of settlement that doesn’t cause too much confusion or post-purchase cognitive dissonance.

If fees across the bitcoin network and layer two solutions begin to smooth out and remain in a certain band, you have a reliable fee market that participants understand. There are no surprises, and consumers and merchants can now conduct real-time transactions without much hassle, which is ideal for businesses that offer cross-border services.

If more transactions are settled in bitcoin, then there is less need for the average person to participate in the financial markets. Instead, they can offer their skills, time, and labour or sell goods and services to acquire bitcoin. Instead of trying to trade in and out of pairs to make a profit, they would have a unit of account they can use to calculate if their efforts are profitable or not easily.

As the price appreciation of bitcoin begins to slow down, investors have two options, they can either take on additional leverage to try and increase their returns through speculating on the volatility, or they can look to invest in businesses that generate a cash flow.

Investors would need to look at committing capital to equity markets or trading other assets instead of bitcoin. Instead of the speculative capital moving in and out of the base asset, that capital can now be unlocked to chase productive uses for the capital.

Savings would flow to where it is needed as price signals become a strong indication of possible business opportunities and the chance to capture profits and drive deflation in those markets.

Have you orange-pilled anyone?