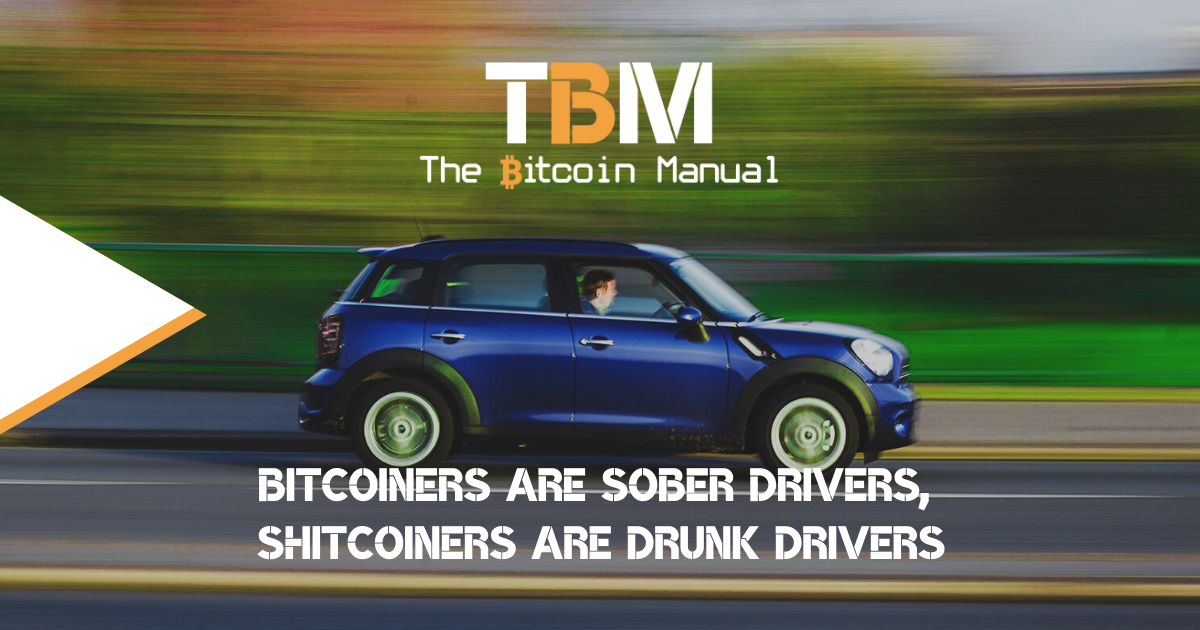 Throughout history, humans have come up with new tools to make life easier; the more effective a tool, the more widely it is adopted. Once a tool reaches its limits, we look at ways to upgrade or replace them. Humans are simply wired to seek ways to be more productive and get more output for less input.

Just like a hammer is a brilliant tool for building things or nailing something to a wall, it’s also equally great for smashing your thumb to pieces and becoming half as an effective a hitchhiker. To all, you budding carpenters or DIY enthusiasts, Thank goodness for Uber, right? The company may have burned through 10s of billions, but at least you can now order a ride with one thumb, right?

Speaking of cars, I’ve found that the art of driving has had a striking similarity to my bitcoin journey or rather how I see bitcoin.

Learning to drive is a skill that is demanded in the modern world; it provides you with a certain level of independence if you respect the rules of the road.

The same goes for bitcoin; once you take self custody of your funds, you are granted a certain level of independence compared to those that do not, but you need t to follow the rules of bitcoin.

If you don’t, you’ll end up with a massive insurance bill, dead or behind bars; the downside is apparent. So people have a natural inclination to follow the rules. Sure there are nutters on every road worldwide, but sooner or later, that short time preference and shortcuts come back to haunt them.

In bitcoin, if you don’t follow the rules, you could lose your coins, you could send them to the wrong address, expose your private keys or lose them. If you don’t take the time to learn how bitcoin works and ensure you practice them regularly, you could end up hurting yourself.

If you value your independence, you’ll find value in the rules based on reality; they are not there to be a hindrance; they’re there to give you value.

If you’re only here for a joy ride, the rules don’t make any sense; why shouldn’t you hob the curb or drive on two wheels? Right, who says it’s not better? That’s the unfortunate mindset of a shitcoiner, something we’ll dive into a bit later.

When you learn to drive, you’re taught the concept of defensive driving; you need to be aware of your surroundings not because you’re the only threat but because everyone else is also a possible threat.

We all have to abide by the rules if we all want to enjoy the benefits of the network like we do our roads. Bitcoin is all about safety and security. Yes, to the outsider or young thrill-seeker, this can seem boring and unnecessary, but it’s not about you; it’s about everyone on the network.

A bitcoiner is someone who knows their car inside out; they’ve seen it break down and know the limitations of their vehicle. They take great care in making sure everything is running smoothly and trek along their path. A bitcoiner studies their vehicle, they know all the quirks and issues, they are aware of the shortcomings and accept that certain compromises need to be made.

They ensure their minds are sharp, not to rely on all the modern conveniences that could introduce noise, but to verify things themselves.

A bitcoiner is someone who doesn’t need the oil light to go on to want to check their oil; they may be overly cautious but realise that intuition and verification are far more accurate than trusting any system.

Bitcoiners have rational optimism but realise that every time you get on the road, there are possible dangers coming your way. Hazards that you need to be prepared for, be it mechanical, driver error or external factors out of your control.

Bitcoiners also know when certain rules need to apply, we realise speed is important for some and we’ve set up fast lanes such as liquid and lightning for those who want to take more risk and get to their destination quicker. The network is built in a way that anyone to switch between those lanes, while shitcoiners think that everyone should speed through one lane and that’s the best approach.

Can you see how deranged and irrational their thinking is? It’s like taking driving tips from a 5-year-old, yet people still take investment advice from these shills and scammers.

A shitcoiner is someone who would step out drunk from the bar, can hardly take two steps in a straight line but still want to step behind the wheel of the car. They’ll make some baseless claim based on some form of reality extrapolated to the absurd. An example would be you bitcoiners have to be sober to drive; you only have four wheels. We altcoiners have 16 wheels on our car, so it can’t crash, even if we are hammered.

Shitcoiners don’t actually verify anything; they’ll make their claims based on what the salesperson told them. They are not qualified to know what is potting and believe total nonsense, but because it sounds fancy and clever, it must be worth defending.

Oh, my shitcoin car has self-driving with AI and geo-fencing and cameras all over the vehicle to keep me safe. Never mind the fact that all that data needs to be processed in real-time on a centralised server that could go down and drag you down the pavement too.

Shitcoiners will also rely on the hot hand fallacy, saying things like, like I’ve done it before and nothing happened to me; therefore, this time, nothing will happen to me.

You can’t reason with drunk people.

Have you ever tried to reason with someone who is intoxicated? It’s a thankless job, and the same goes for those who are captivated by greed. You may be the voice of reason, but you’re also a buzz kill, and we’re having a good time so save that rationality for Monday morning at the office, you square.

Drunk driving may be illegal, but we still do it because enforcing it isn’t practical for the authorities, so we think we can get away with it. The same goes for gambling on unproven unregistered securities. They are technically legal in this grey area we find ourselves in now, and since there isn’t really an authority actively cracking down on it, it’s free reign.

I am not going to be the one standing outside the bar preaching about the dangers of drunk driving. I think by now it should be obvious if you want to risk your life or capital on a hunch that you may reach your destination by hook or by crook, who am I to stop you?

I am done being the voice of reason, and I think shitcoining has become a part of the re-education process towards bitcoin. You may realise that you’re getting shafted by the fiat system and move to bitcoin, or you can get a second shafting by fiat 2.0 and all its acronyms before you realise why bitcoin is valuable.

That’s okay; others take longer to get sober and realise they have responsibilities, bitcoiners are the adults in the room, and we’re waiting for the rest of you to grow the fuck up.