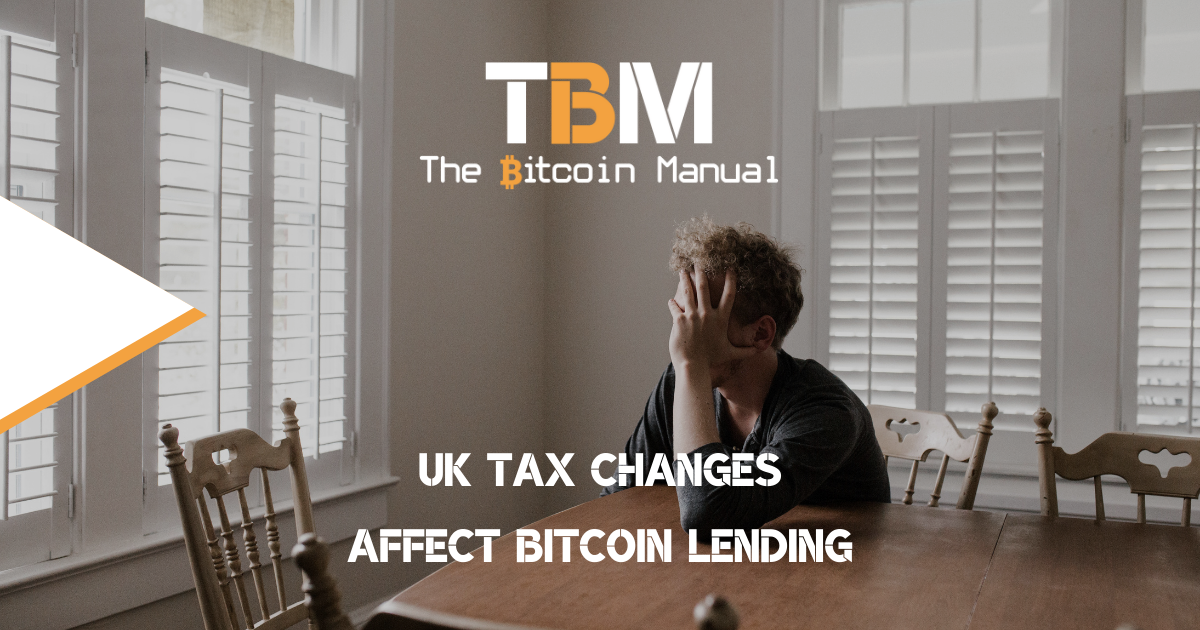 As someone who is adopting the “forever HODL” approach to stacking sats, looking at ways to add to that current pile was at the forefront of my mind.

One of the methods that many use are financial services that offer “interest” if you hold your Bitcoin with them. Some of these are centralised and some are decentralised but the premise is, you will get a few more sats for taking on the risk of using these services.

It makes sense that any interest paid out to you gets treated as income as that’s how it works in the UK if you receive interest payments in your non-ISA bank account (albeit the savings rate is pitiful).

However, Her Majesty’s Revenue & Customs (HMRC – the UK’s tax agency) have significantly updated the way they consider interest earned from such services, although they have admitted themselves, it’s not all that clear due to this “constantly evolving area”.

This is giving many tax firms and UK Bitcoiners a big headache.

For the full update, have a look at their page about decentralised finance here.

The below is just my interpretation of the changes. I’m just some dude on the internet who wears a fleece in winter. I’m not a tax consultant, tax advisor or financial advisor so please consult your own one for clarity on how to complete your tax report.

The Nature Of The Beast

What I gather from initial reports is that the changes HMRC have made to their consideration of Bitcoin lending (and any shitcoin lending too) are considerable and will probably alter many people’s approach to taking a loan or earning interest in future.

It will all depend on the nature of the return you are getting from these services as to whether it’s classed as “income/revenue” or “capital”.

Based on what is on HMRC’s site at time of writing, if the return (interest) was earned by you for providing Bitcoin to the lending platform at an agreed APR, then this is income and so is subject to income tax.

Effectively, you are being compensated for the lending platform using your Bitcoin.

They then start going in to some weird analogy about fruits and trees which is unnecessary, given that the wording on the site is already overly complicated in the first instance!

Instead of receiving an interest payment from the lending platform, capital classification comes about from the increase in price of the asset when deposited on the platform.

This has implications if you are taking a loan and knowing the terms and conditions of those loans is paramount as HMRC may consider these as a disposal.

This is the case where you put your Bitcoin up as collateral and the lending platform does what they want with that collateral and doesn’t tell you or give you information about it.

In other words, if there’s uncertainty and speculation around what happens to your collateral, it could land you in a spot of bother, depending on the specific facts.

However, if the lending platform is clear about what happens and it’s agreed upon at the time of starting a loan, then when you get the Bitcoin back, it might be considered as income.

Another thing to consider is if your collateral increases in price and is released back to you if a certain loan-to-value ratio is reached.

Once again though, the wording isn’t completely clear and making sure you fully understand what the terms and conditions of service are for these lending platforms will put you in good stead.

As always, speak to your tax advisor although it really doesn’t sound like HMRC have done anyone any favours.

I heard somewhere that the UK was 2nd in the world for being a “Global Financial Centre” , which is baffling to me given how backwards the FCA and HMRC’s approach has been to innovation with Bitcoin in the last 12 months.

How they expect to keep that spot with such complicated measures and the future of money staring them right in the face is being brought into question by cryptocurrency tax firms.

Particularly when there are more friendly financial hubs in Europe such as Portugal and Malta, with El Salvador in Central America now looking ever more attractive for Bitcoiners due to favourable tax treatments.

What this most recent episode has done is made me think about my own approach on taking on that risk to earn a few extra sats that could be taxed in whatever way is interpreted.

These new “guidelines” from HMRC means that just buying and hodling is by far the simplest way of going about it from a tax perspective, why bother with anything else…?

British bitcoin pleb falling down the rabbit hole and willing to share every bump, scratch and knock along the way
View more articles from this author
PrevPreviousBitcoiners Are Sober Drivers, Shitcoiners Are Drunk Drivers
NextHow You’re Doxing Yourself With Portfolio ManagersNext