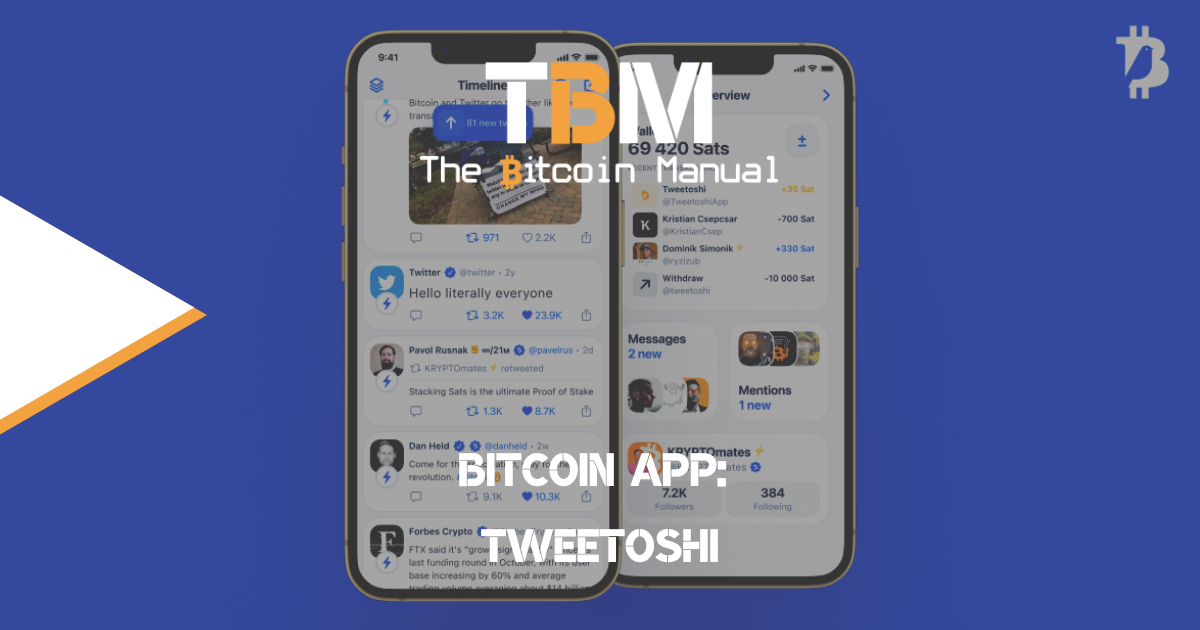 Getting into the bitcoin space is not only about acquiring satoshis but also acquiring knowledge about what you own and how to use it. Bitcoin allows you to eliminate third party risk and become your own bank, and with that level of custody and personal responsibility comes with it a need to improve oneself. Bitcoin is not a company; it has no marketing department, only ordinary people who have seen an opportunity to create something of value for the bitcoin network and its users. This could be in the form of hardware, software or educational material.

This decentralisation or fragmentation of knowledge makes it hard for people to find the correct information. It is part of why we started The Bitcoin Manual, to provide a jumping-off point for others to learn and start asking the right questions.

One way bitcoin information is disseminated is through Bitcoin Twitter which has become the “official home” of bitcoin knowledge as plebs, companies and bitcoin-based media go to share information. Twitter has become so popular with bitcoiners that it’s even embraced a native tipping function so users may send one another satoshis via the Lightning Network, while third-party applications like Tippin.me and Alby have provided on-ramps for bitcoin tipping on Twitter.

The problem with bitcoin tips on Twitter is that it’s not available globally and requires you to connect a custodial service to fund your tipping wallet. In contrast, the third-party services I’ve mentioned above are ideal for using Twitter in your desktop browser.

To offer a solution for mobile users the world over, Tweetoshi has emerged as an application that wraps the Twitter experience in an easy to use mobile application and provides a native bitcoin experience.

How did Tweetoshi get started?

Tweetoshi is a startup based in the Czech Republic, Matěj Švancer who as many bitcoiners do, tends to find themselves hanging around on Twitter far more than they should, and thought that the current experience of distributing sats via the network wasn’t the smoothest experience. People were sending bitcoin via the base chain or Lightning Network by sharing QR codes, Wallet Addresses, LN-URLs or Lightning Addresses, which takes a getting used to and isn’t easy for most people to understand coming into bitcoin.

So instead Švancer created an app that abstracts away some of the complexity and allows users to enjoy their Twitter experience with a bitcoin wrapping.

“I spend a lot of time on Twitter,” co-creator Tweetoshi Matěj Švancer tells CzechCrunch at the beginning. “I mainly watch bitcoin content there, so I thought of connecting the two things,” adds Švancer, who is best known on the domestic cryptocurrency scene as youtuber Krypto Mates . On its channel with more than 37,000 subscribers, it discusses content around cryptocurrencies and the technologies connected to them. Last year, he sat down at his desk with his team, which now has five permanent members, and began working on a new mobile application in order to easily break traditional business models of common social networks and expand the use of bitcoin. “We had a vision to reward users just for using our Twitter client. And as it turns out, there is interest in it, “

Is Tweetoshi free to use?

Yes, Tweetoshi is a free to use mobile app, you can download it from either the Google App Store or Apple App Store and install it on your device. Once installed, you will need to log in via your current Twitter account and once authenticated you are ready to go.

Your Twitter feed should immediately boot up on screen and you can get back to being a toxic maximalist and hanging out with the cyber hornets or trying to get Michael Saylor to retweet your latest hot take.

Now once you’re using the app, you should see a ⚡️ tipping icon next to all of your tweets, if you tap it, a lightbox should pop up with the prompt to tip another user. You can select from preset amounts or add your own amount; once you’re ready to tip, click “Send Sats”, and you’re done. Your native wallet within the app will do all the work for you.

Using Tweetoshi, you can tip any Twitter user. However, only those who already have the app installed would receive their funds immediately. If you send a tip to a user who does not have Tweetoshi, they will have 30 days to install the app and verify their Twitter account to accept the bitcoin.

After 30 days, if the tip recipient does not claim the funds, the bitcoin will be returned to you.

If you want to use the app regularly and like to support other users, it would be best if you funded it with a few thousand satoshis; at today’s prices, $1 of bitcoin should be more than enough to get you enough satoshis to start sending tips around, in the default 10, 50 or 100 sat increments.

What do I need to get started using Tweetoshi?

All you need is a compatible smartphone, a Twitter account and a lightning wallet so you can either fund your account or remove funds as you earn them within the app. You won’t need to set up a Lightning wallet to get started, as this is all handled by the Tweetoshis custodial wallet offering.

How to earn sats on Tweetoshi?

To earn satoshis, you’ll have to engage with other users of Tweetoshi who think your banter, memes or general hatred for shitcoins is worth a tip or two.

How to add or withdraw sats on Tweetoshi

If you’ve just signed up, you’ll notice that your wallet is bare and that’s no fun, to get some satoshis in your wallet you’ll need to use the lightning network, select the deposit function and pay the QR code or LN invoice provided to instantly fund your account.

Once the satoshis are there, you’re free to start tipping users.

The same goes for withdrawing sats sitting in your account, simply select withdraw and scan the QR code or copy the invoice to remove your satoshis.

Note: Tweetoshi uses a custodial wallet, so funds deposited within the app are not in your control, but you have access to it, so you can delegate those funds to different users as you see fit. So don’t deposit more funds than you’re willing to lose and don’t consider this your primary lightning wallet but one you can experiment with and have fun getting used to the lightning network.

Personally, I would like to see future improvements to the app that allow you to connect your own Lightning wallet or Lightning node as an option, being someone who loves to have control over their funds every step of the way.

There you have it, an easier way to enjoy your Twitter experience and add bitcoin in the mix, earn a few tips, or tip others. If you are a mobile Twitter user, then Tweetoshi is the ideal swap out for the traditional Twitter app.

If you’d like to learn more about the app or give it a try check out the links below.