Why Use A Bitcoin Wallet With Your Node

Home » Articles » Why Use A Bitcoin Wallet With Your Node 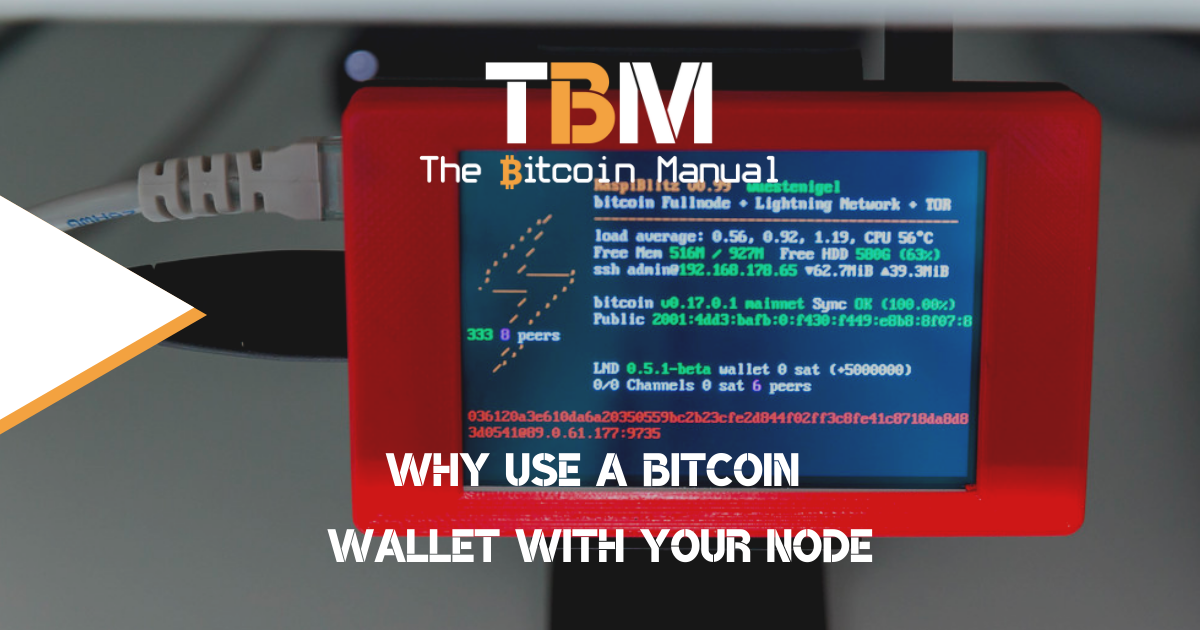 Taking complete control of your finances can be daunting, and I get it; I went through the same feelings myself. Why do I have to know all these things, and why do I need to take all these precautions? When you don’t see the value in specific actions or properties of bitcoin, you may consider taking shortcuts.

For example, if you don’t value your privacy, if you think you’ll never be tracked, if you believe your government won’t seize your funds, you may not see the value in privacy techniques.

If you have faith in companies like exchanges and wallet providers and have never been burned by financial institutions, you may not see the value in taking custody of your funds.

These benefits you enjoy are not a given right and can quickly change. Financial institutions could be mismanaged, governments can turn rogue, infrastructure could be damaged, and a host of unforeseen circumstances you’re probably not accounting for could leave you stranded without funds.

Taking control of your keys and holding your funds is one step into hedging your bets against these possible threats, but it’s not the only step.

As you become comfortable with self custody, you should consider running your own Bitcoin full node, which will provide you with additional benefits that cannot be understated.

What is a Bitcoin node?

A Bitcoin node is any computer that runs special bitcoin software to verify all the rules and checks it against a locally stored copy of the entire blockchain. Nodes validate each block, and they serve as the referees of the Bitcoin network.

Most of us connect our nodes over an internet connection, but some nodes connect via satellite, mesh network, or even radio, ensuring the bitcoin network remains robust. The fact that there are so many options to run and stay connected to the peer-to-peer network ensures no central authority controls the blockchain.

So now that you know what a node is, why would you run one or connect it to your current software hot wallet or cold storage device?

If you’re using a bitcoin wallet where you control the keys, when your wallet shows the data from transactions or balances, it has to request it somewhere. It will often come from one of the nodes run by the wallet provider or exchange; other times, it can ask a series of RANDOM public Bitcoin nodes what the balance each of your addresses contains.

Since anyone can run a node, private or public, some of this data is collected and served by specialised surveillance companies. In addition, the nodes you connect to keep a log of that data, such as exchanges and can be a central point of attack for hackers or, worse, governments.

Random entities you didn’t give permission to possibly have financial data on you and other data such as your IP address (which can be used to identify you) and that you have a Bitcoin wallet.

Now that you are identified, they can then attribute all of your current and future addresses you’ll use within that wallet, and all the balances of all those addresses, now and later. Do you want others to know how much money you’re keeping on-chain, when you bought it, moved it and how you’re spending your balances? I know I don’t!

Knowing you have bitcoin, hackers may target you to extort or trick you out of your bitcoin. At the same time, governments may target you in the future with heavy wealth taxes or total confiscation, as the US government once did for gold with order 6102 in 1933.

When running your node, you don’t broadcast your IP to other nodes when broadcasting transactions to the chain, and you have far more privacy.

Trust no one; verify everything yourself.

When using a third party node, you’re trusting their data sets and the software they’re running. A technically sophisticated scammer could potentially manipulate which node your wallet connects to and show you data not congruent with the real bitcoin blockchain.

They could send you counterfeit bitcoin, and your wallet would think it’s received real bitcoin because the malicious node lied to your wallet. Granted, this is very unlikely, but the fact that you can prevent it by running a node makes the development of this kind of attack harmless.

To check that transactions are valid, you can check your node and compare the data to that coming from other nodes and public block explorers to see if it all matches up and that your bitcoin is genuine.

Your choice of software.

All bitcoin software upgrades are pushed through via a soft fork. A soft fork allows all bitcoin versions to remain backwards compatible with previous versions, so you’re not forced to upgrade your node software. If you don’t like specific rules, you can choose to ignore them and not support these updates while maintaining the version you prefer on your node.

In addition, there are several versions of node software, so if you don’t like one node software providers changes, you can opt for another, which provides you with more choice over how you want to run your node.

There have been times when the bitcoin network would be attacked by those who support the network. Participants may want to push through their changes, known as a “hard fork“.

If you don’t run a full node, your opinion will not be considered, and you will be forced to follow the blockchain and the rules given to you. Running a full node is an indirect way of voting for the rules you want to enforce, which shows miners and other nodes which set of rules you prefer.

How to connect my wallet to a bitcoin node?

Once you’ve set up your node and your wallet, you will need to follow the instructions for that specific wallet, but it’s usually a case of adding your port and host ID, and you should be able to validate that you’re using your node.

South African bitcoin pleb falling down the rabbit hole and willing to share every bump, scratch and knock along the way
View more articles from this author
PrevPreviousThe Cost Of Price Stability
NextWhat Is A Bitcoin CoinSwap?Next