What is Stratum V2?

Home » Articles » What is Stratum V2? 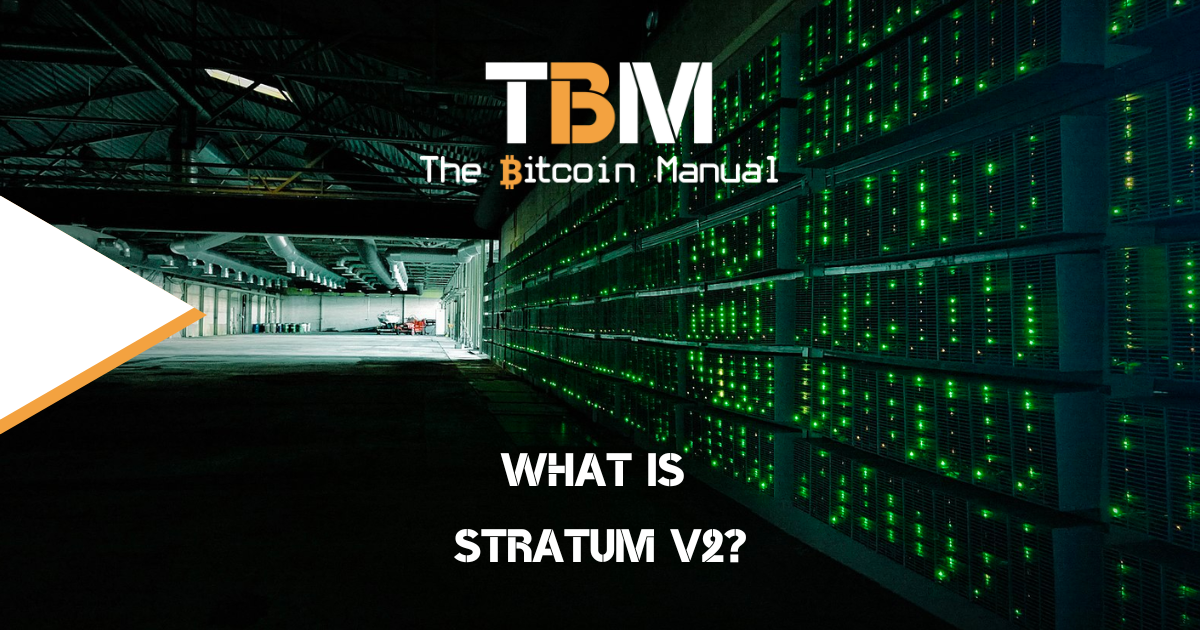 Bitcoin mining is an essential part of the bitcoin network; while a lot of the focus revolves around how much you can earn from the block subsidy and transaction fees, this is only one element of mining, the incentive to get people to commit resources to the network. Bitcoin mining requires miners to convert electricity into hashes via the sha-256 hashing algorithm. These hashes are a metric used to ensure that transactions are valid and added to the bitcoin blockchain correctly using a global network of computers running the Bitcoin code.

Solving these puzzles requires powerful computing power and sophisticated equipment, along with compatible mining software. This mining software, known as Stratum, has been used for over a decade by various miners connecting and supplying hash rate to the bitcoin network. The enterprise-grade, open-source protocol and its associated software have been extensively tested by Bitcoin’s multi-billion dollar mining for years and trusted by industry professionals and home miners alike.

As the bitcoin network has grown and miners from all over the world compete, we’ve seen the limitations of this software play out in real-time, and it was due for an upgrade. Considering that today the bitcoin network secures billions of dollars, it’s only natural that processes around it would evolve and improve.

To date, most of the improvements to bitcoin mining came from the improved chip fabrication in ASIC miners as well as firmware for these chips, but the mining software itself remained the same until now.

The release of Stratum V2

Bitcoin mining software developers have released the first significant update, simply called Stratum V2. Developers have already made Stratum V2 available for testing, as is the case with any bitcoin software; testing it in the wild will require some caution.

Bitcoin miners use Stratum to buffer and improve data transfer between mining pools, other miners, and bitcoin node operators. Most miners will stay on V1 for several weeks as they thoroughly test V2 as you do not want to risk your mining operations profitability, should issues cause any downtime.

For Bitcoin miners, the update is a welcome yet momentous change in daily business and will bring with it welcomed improvements should there be no hiccups during the transaction from V1 to V2.

What is Stratum V2?

If widely adopted, it would help to make the mining pool layer of bitcoin more robust and decentralised by allowing individual miners to construct their own blocks instead of relying on pools for coordination.

On top of the decentralisation benefits, it will provide privacy and efficiency benefits for miners as well as chain analysis has been pretty focused on watching coins coming from and moving to known miner wallets.

What are the benefits of Stratum V2?

The update improves security and provides better support for lower-speed and less reliable Internet connections. The first version of Stratum released in 2012, V1, required each mining rig to submit its work separately. However, V2 adds an aggregator, allowing multiple mining rigs to submit work to a mining pool as a group.

It also reduces the amount of data that needs to be submitted when creating a block and submitting your proofs.

V2 also reduces the risk that an attacker can steal hash rate from owners of mining rigs. It also standardizes authentication, encryption protocols, and messaging connections between rigs and mining pools.

Stratum V2 will also add the option for mining rigs connected to pools to choose their work rather than the pools selecting work for them.

The Stratum V2 software is not part of bitcoin’s core network. It’s simply enterprise-grade, open-source software that miners can choose to opt into should they like the additional features it offers. Stratum does not affect full node clients, hardware wallets, or bitcoin core development. A miner will simply upgrade from V1 to V2 if it helps their business increase profitability and security.

Stratum V2 also has the advantage of simplifying smaller mining operations, including home-based miners whose Internet connection is slower or less reliable. This feature could encourage onboard independent miners who were previously deterred by their Internet connections or conduct mining intermittently due to access to power.

As bitcoin mining becomes a more competitive market each year, and as the network secures billions in transactions daily, the need for improving aspects of bitcoin is evident. The stakes are high and continually rising.

The ability to break down certain tasks and give them back to individual miners offers the network a new layer of protection. Especially against man-in-the-middle attacks which is something that every miner needs as scrutiny of the bitcoin network increases.

If you want to learn more about Stratum V2 on bitcoin, use this article as a jumping-off point and don’t trust what we say as the final say. Take the time to research and check out the resources below.