What Is A Bitcoin Decoupling?

Home » Articles » What Is A Bitcoin Decoupling? 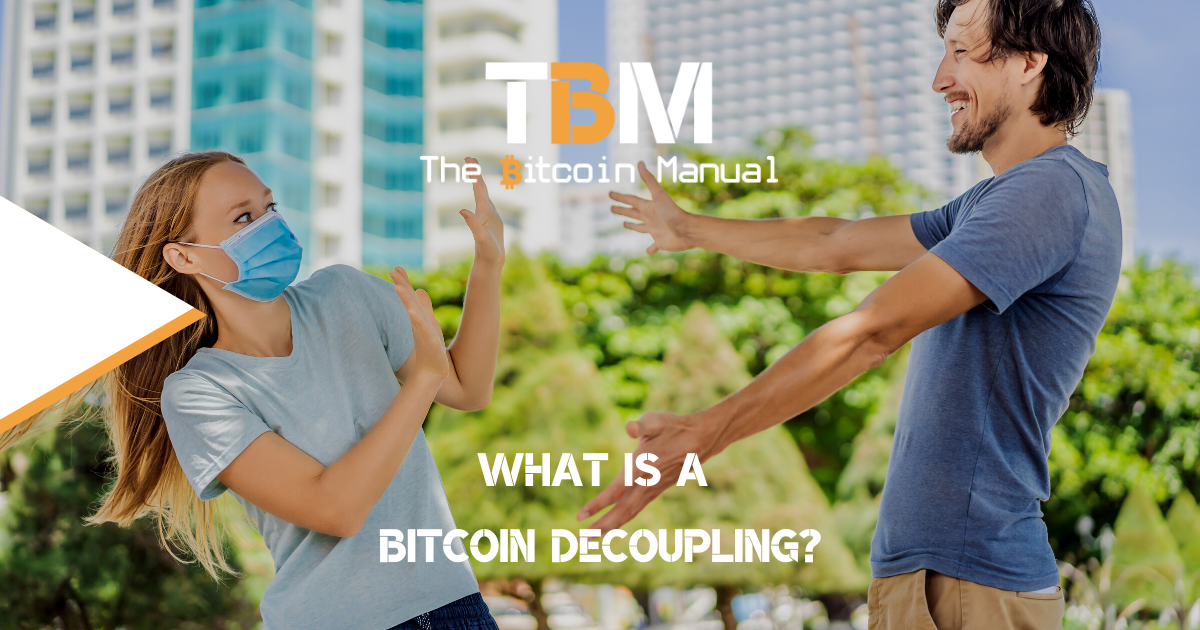 Bitcoin is a technology; it’s formalised the use of a distributed ledger and used that as a basis to create a decentralised payment network. When you first begin to learn about bitcoin, a large portion of your focus will be on the technology, how it works, why it’s different and how it improves on current payment technology.

For most of bitcoin’s life, it had very little correlation to the stock market since it was primarily retail-focused and had very few on-ramps to trade it, but as the market matured and more exchanges listed the asset, it exposed it to more users and more capital. Eventually, bitcoin began to reach market caps of well over $300 million and could clear a sizable daily volume, making it more attractive for larger players to take a hedged position and move in and out of the bitcoin market.

Since institutional money has started to flow into bitcoin and stake its claim to the tradeable float of coins, we’ve seen bitcoin trade in lockstep with the stock market and with technology stocks in particular.

In finance, when two assets trade in tandem, they are referred to as coupled, and price movements are usually correlated. Since 2020 we’ve seen this phenomenon increase between the bitcoin and traditional finance ecosystems like risk-on assets, but if bitcoin is meant to be digital gold or a store of value, why does it trade like a growth stock?

Let’s take a look at some of the possible reasons.

The muddy waters of the money merge

Bitcoin is designed to create a payment system that is trustless, permissionless, and decentralised. However, a few highly influential trends have emerged in the last five years.

Institutional players and their thesis

The first I mentioned already is since bitcoin can now clear large volumes, it’s attracted institutions to trade the market. These funds would allocate a percentage of capital towards bitcoin using models that categorise it as a technology play.

The drag of unregulated securities

Another trend has been the growth in investment from traditional finance into blockchain technology which gradually absorbed into traditional finance. Today you’ll see exchanges having their own chain, their token, raising capital for new chains and tokens and have created a highly speculative market of pseudo-tech equity that is available to public markets.

While many advocates for altcoins misunderstand and promote them as an alternative, what they fail to see I how it’s merely an extension of the traditional investment landscape, looking desperate for more risk and volatility so they can capture it for outsized returns. Instead of transforming the present financial framework with a decentralised one, we are now monitoring the price movements of bitcoin and other unregulated tokens, just like we would with stock or any form of the mainstream finance industry.

Technology startups that have gone the blockchain route offering a token instead of traditional equity, have created this secondary market for technology securities once that bitcoin gets lumped into and is seen as an extended technology play. Instead of adding bitcoin to your portfolio as a hedge, investors are “diversifying” into a bunch of tokens and rebalancing those flows as traders would do multiple stocks in one sector.

These assumptions about bitcoin are evident when we see how it moves based on interest rate hikes by the US Federal Reserve are influential enough to move bitcoin and the crypto markets.

If bitcoin is meant to be an asset that allows you to take chips off the table, to hold them in cold storage away from third-party risk and leveraged bets in the market, it doesn’t help if you actively ignore those properties. Retail and institutions, with the help of certain trading platforms, have created a host of products for leverage trading, borrowing and continued speculation.

As these traders take on more risk to squeeze even more volatility out of the trade when it goes against them, and margin calls occur, they can be cascading and drive prices down. To save positions, traders might sell stocks to cover certain leveraged bitcoin trades, or they could sell bitcoin to cover leveraged positions in the stock market.

When you have traders moving value between the stock market and the bitcoin to try and cover longs or shorts, you’re going to see it trade in close proximity.

What is a bitcoin decoupling?

So, if bitcoin is not a stock, is different from altcoins, was never created to benefit traditional finance, depend on it and be anti-central bank and banking, how can it be steered back towards its true purpose?

Here’s where decoupling comes in.

Bitcoin has not been correlated to traditional markets for the first few years of existence, but recently over the last five has increasingly correlated with the US stock market and is beginning to follow stock price movements more closely. This correlation has also come at a time when we face recovery from an economic and supply chain shutdown, a global proxy war Russia-Ukraine war, four-decade-high inflation levels around the world

While on the cryptocurrency side, we’ve seen imploding of tokens like Terra taking with it a basket of operations and other coins in the process, all putting selling pressure on bitcoin. Bitcoin is now stuck in this quagmire; instead of acting as a hedge against inflation, those competing for bitcoin’s float and trading it are using it as a way to access liquidity when needed quickly in times of uncertainty.

When you have a growing cohort of indiscriminate buyers acquiring bitcoin for the long term, you have a constant demand you can sell into whenever you require capital. This makes bitcoin a great asset on your books should you need to access funds. Making bitcoin the first asset you dump with minimal slippage so you can cover whatever obligations you have, but this cannot go on forever, as more of the float moves to long-term holders and is taken off the market.

What does the decoupling do for bitcoiners?

If decoupling does happen, it will allow investors to use bitcoin as a ‘hedge’ against their equity investments instead of trading with equity positions. As the name itself suggests, decoupling means the dissociation of two different elements.

Coupled assets show similar movement on the charts. Decoupling occurs when the NASDAQ (or S&P 500) and bitcoin move in a separate direction, independent of one another.

Coupling and decoupling are measured on the correlation scale that ranges between -1 (non-correlated) and 1 (completely correlated).

The present correlation value between Bitcoin and the S&P 500 stands at 0.63 after going as high as 0.75 in May 2022. Albeit for a brief period, decoupling was observed on the charts at the end of May 2022 when equities performed, but bitcoin fell.

All markets rely primarily on investor sentiment and can move either way, depending on how the feelings change. When bitcoin gets decoupled from traditional indices, the investors lose faith in one of the two asset classes at that time or the general thesis on the asset changes. In bitcoin’s case, a decoupling would be once more market participants see it as a store of value rather than a technology play to trade on the volatility.

Diminished investor confidence can stem from multiple causes, such as geopolitical tension, regulatory clampdowns or new legislation, economic performance, etc. As debts grow in the household, corporate and sovereign markets, we see the need for collateral growing. Eventually, that need will push investors to hold an asset with no counter-party risk.

Coupling or decoupling can also be with altcoins; while bitcoin and altcoins might move in the same direction in the short term, they do not do so in the long term. There hasn’t been a single altcoin that has held its value in bitcoin terms and continues to trend down against bitcoin.

Do you think bitcoin will decouple from risk assets? How do you think that would change how people view bitcoin or even allocate a position towards bitcoin? Let us know in the comments down below.

South African bitcoin pleb falling down the rabbit hole and willing to share every bump, scratch and knock along the way
View more articles from this author
PrevPreviousUsing ZCash Privacy Tech On Bitcoin
NextBitcoin App: JamNext