Why Bitcoin Trades Closely To The Stock Market

Home » Articles » Why Bitcoin Trades Closely To The Stock Market 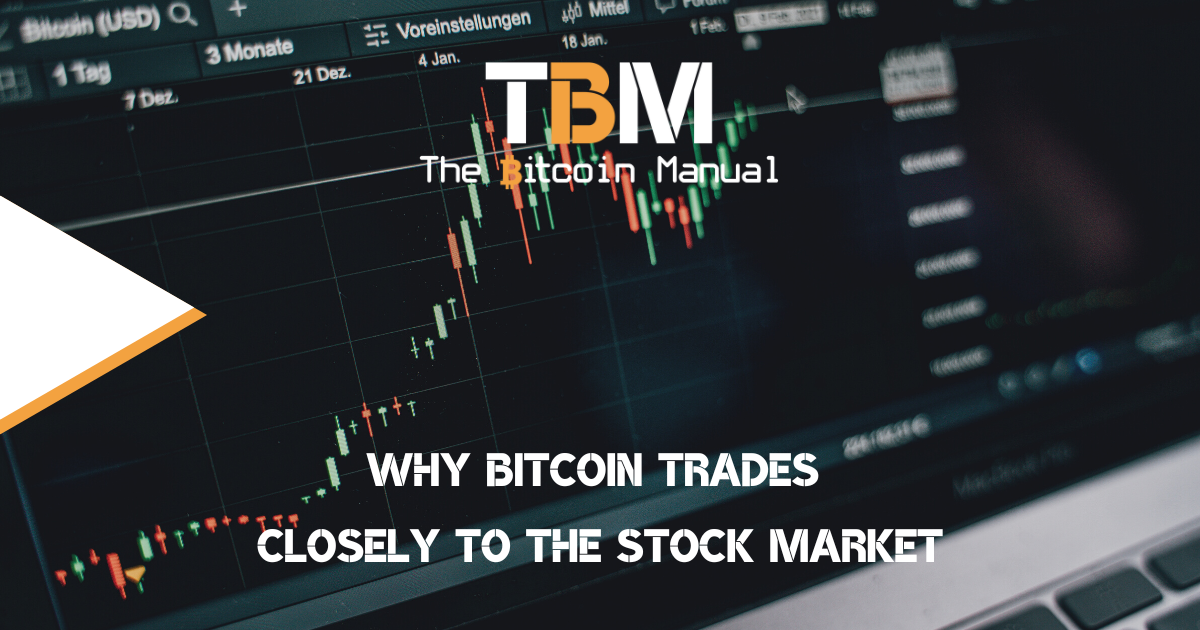 As bitcoin matures, it brings in more investors; in the first two cycles, the influence was predominantly retail, but that has gradually changed, especially in the last five years. More institutions are starting to take positions in bitcoin or getting exposure to bitcoin. This can be done by directly acquiring bitcoin through mining stocks, ETFs or futures.

The more the market matures, the larger the bitcoin market becomes as more people want exposure to the asset in some form. This maturity brings in more demand and deeper liquidity which attracts institutions who can start to move bigger volumes through the system.

Now that bitcoin trades in the hundreds of billions and peaked above 1 trillion, it has slowly started to gain attention with institutions. Due to that interest, we’ve started to see a correlation with the stock market.

Markets are all moving in tandem

To give you an idea of how closely they track, the S&P 500 and Nasdaq were trading 2.3% and 2.8% lower, respectively, at the time of publication after Friday’s speech. While, bitcoin similarly took a knock and lost 4%.

But why is that? Bitcoin is not a stock, and some have claimed it’s a store of value and digital gold, so why would it trade like a high-risk tech stock?

Tagged as a tech stock

Bitcoin is an entirely new asset class, and many investors are still coming to terms with it since it’s a purely digital asset, based on the internet and is built on a network effect, which many institutions look at as an emerging technology play.

When the big money considers this as an Amazon, Google or Facebook-type asset still finding its feet, it’s bound to be volatile, and it’s bound to track with those assets. If the largest market actors see bitcoin as a tech play, they will trade it like one. It could be due to active management or due to algorithms set to sell or buy bitcoin based on the movements of a tech stock, so they maintain a certain relation.

The price of bitcoin is more correlated with share prices on the tech-heavy Nasdaq stock index than at any point since July 2020.

What exactly is correlation?

Correlation is measured on a -1 to 1 scale, where -1 means the prices always move in opposite directions and 1 means they are in perfect synchronisation. A 30-day correlation smooths out some of the day-to-day noise by using a longer time horizon.

While Bitcoin is increasingly correlated with risk assets like Google and Tesla stocks, it’s moved into a negative correlation with gold. According to a new report from Arcane Research, the 30-day correlation between Bitcoin and Nasdaq is 0.70.

It’s -0.45 is right around an all-time low point. In August 2020, BTC-to-gold hit an all-time high, though the pair has historically fluctuated between positive and negative correlations, providing little guidance to market speculators.

A brief history of correlation

This high correlation wasn’t always the case. If we backdate bitcoin’s price movements when compared to the S&P500 in 2022, we are very much in the all-time high territory regarding correlation. Bitcoin’s correlation coefficient with the S&P 500 hit 0.64 in early May 2022 before falling to around 0.4 earlier this month, according to data from Coin Metrics.

I think that this increased correlation is due to bitcoins’ maturity and its’ growing exposure to professional capital markets, it’s moving out of the retail traders’ game, and institutions and sovereigns wanting to take positions are going to see it tie with the market, these big players deem it to be in, and since bitcoin is seen as a risk on the asset, positions will be trimmed like a risk asset.

Investors should welcome this news as it’s the latest phase in bitcoins’ growth and its move to becoming an asset people take seriously. While not ideal at the moment, if you’re trying to use bitcoin as a medium of exchange, but for those looking to acquire long-term, these movements can help you increase your position at lower costs if you enter at points where these funds need to rebalance.

As each halving comes along and the coins become dispersed, certain market actors will have less influence on the market. If the thesis is correct, bitcoin will continue to take steps to become an independent asset. Just because it is currently correlated to other macro assets does not mean it cannot decouple in the future.

Some hope that Bitcoin could eventually become negatively correlated to equities and act more as a store of value. This means that it trades opposite to the stock market as gold tends to do. When stocks are down or economic conditions are not conducive to growth (i.e., high inflation, interest rates rising, and the like), investors flock to Bitcoin for protection.

For now, investors should take the highly correlated trends to tech stocks with a grain of salt. It is likely only a matter of time before Bitcoin returns to an uncorrelated trend.

This current phase of price action is not a reflection of bitcoin; as we can see from history, the correlation is a new trend. It’s more a reflection of how the biggest capital allocators view bitcoin at the moment and if that’s the case, it can change as these investors update their thesis and trading algorithms accordingly.

Bitcoiners banking on the decoupling

Bitcoiners, of course, have a different view of the asset, in that it is a long-term store of value and acquiring it regardless of price is the best method of approach. They see current price movements as short-term noise and focus on the long-term trend where bitcoin continues to appreciate in value compared to assets and faith money due to its scarcity.

The ultimate hope for bitcoin is that it eventually starts to trend down in correlation to the stock market and that it will not be subject to economic policies that often cause ups and downs in equities. If bitcoin trades separately from the stock market, it is viewed almost as a badge of honour for bitcoin’s development from a speculative, volatile asset to a necessary component for all portfolios.

In the current market conditions of rising interest rates and increased inflation, almost all assets have been hit hard. The majority of stocks have retreated from pandemic highs, especially tech stocks and people generally have less money to invest and want to hold cash in times of uncertainty.

In conditions like this, it makes sense that bitcoin, viewed as an emerging technology by many, would see similar declines. But again, this is only a recent phenomenon.

There is growing evidence that bitcoin is only going through a phase and it’s going to trend towards uncorrelated with stocks when the economy and bitcoin market mature to deal with this expanding network and demand for a savings technology.

Do you invest in bitcoin, or bitcoin companies, be that miners, exchanges, or startups? Let us know in the comments down below.

South African bitcoin pleb falling down the rabbit hole and willing to share every bump, scratch and knock along the way
View more articles from this author
PrevPreviousHow To Create Lightning Payment Links
NextWhy Bitcoin Spot ETFs Continue To Get RejectedNext