What Is A Bitcoin Mining Stock?

Home » Articles » What Is A Bitcoin Mining Stock? 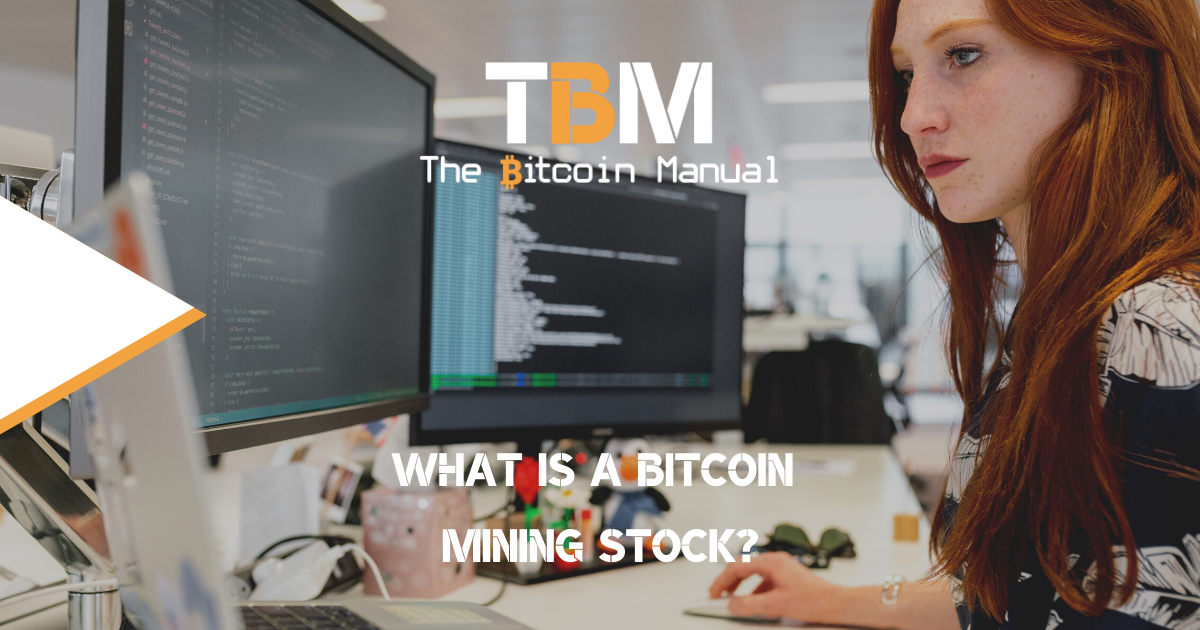 Bitcoin mining has grown over the years, starting as hobbyists running the software and using their computers to mine bitcoin; it slowly graduated to custom mining rigs. As competition increased, so did capital flowing into the sector, and we saw specialised mining equipment created known as the ASIC miner.

The improvement in equipment kicked off a mining arms race, if you will, seeing many earlier miners formalise their operations. We saw miners turn into large private operations and eventually companies.

Some companies have gone as far as to raise capital on public markets with the sole intention of mining bitcoin.

What are public bitcoin miners?

Public bitcoin mining companies, like traditional mining companies, operate their business by raising capital by selling shares on the open market, where retail investors and institutions can purchase an ownership stake in the company. Investors purchase these stocks with the intention to trade positions or hold long-term for the dividend payment and price appreciation of the stock.

Bitcoin miners operate the computers that process transactions on the bitcoin network and provide security for transactions and an expensive cost that ensures the chain cannot be changed or rolled back.

In return for providing computational power to the bitcoin network, these miners receive payment in newly minted bitcoin itself for their work. The submissions of computation to the network are known as proof of work, while the reward is known as the block subsidy or coin base and also includes fees from transactions.

In order to mine and compete with other participants in the network, computers need to complete millions of computations. To complete these computations, miners consume vast amounts of electricity to try to win a block reward, competing against other miners around the world for each block.

Note: For the record Bitcoin itself is not a stock

Bitcoin mining is capital intensive and comes at a cost

Miners require capital for their equipment, their labour, their cooling, their storage, their internet, maintenance, their staff, and of course, their growing energy costs, as you would have if you mined other commodities.

Miners then calculate their operating costs—primarily electricity and subtract that from their current fiat holdings or the fiat they acquire when they sell their bitcoin.

The costs per bitcoin mined can change depending on the host of input factors and can cost anywhere between $4,500 to $18,000 across the industry. With the price of Bitcoin on the rise, it benefits miners to raise debt or equity to have the cash to pay their fiat obligations and hold on to that mined bitcoin as long as possible.

Many miners also hold Bitcoin on their balance sheets with little incentive to sell at current prices, clawing new supply off the market and ensuring the bitcoin trading float doesn’t increase as high as the rate of bitcoin mined each day.

Why investors opt for bitcoin miners

Direct buying of bitcoin is more of a long-term play, not that people aren’t going to trade it, through investment vehicles like Bitcoin ETFs or leveraged trading. As a free and open market that trades 24/7, the market is always trying to revalue bitcoin, while the long-term holders provide the floor as they look to acquire bitcoin at the lowest prices.

BTC mining stocks, on the other hand, are for those who want to bet on the trade in the short term and gain exposure to even more volatility. Instead of betting on the network and the native asset, you’re making a concentrated bet on one of the miner’s ability to outcompete other miners on the network.

Getting exposure to bitcoin miners is a fundamentally different investment strategy that suits other people and interests. Bitcoin mining stocks are regulated securities that can be traded with trading desks and brokerage accounts; they can even be added to some funds or be part of ETFs.

Investors acquiring bitcoin mining stocks could be interested in taking a position in mining stocks as diversification. In some cases, it could be your only vehicle to gain bitcoin exposure through your fund or brokerage account.

In the commodity extracting industry, investors tend to calculate a miner’s enterprise value per unit of reserve and compare it to the commodity’s spot price. The former should be lower, as miners need to bear operation and capital expenses.

To give an example from traditional markets, let’s take a look at oil and gold.

There are different types of public miners

Bitcoin miners come with different risks and of different sizes and capacities. You could take the geopolitical or jurisdictional risk by investing in miners in a country that may not be too friendly to bitcoin.

In other cases, you could look at the company’s access to affordable energy and their cooling solutions, such as natural cooling in colder regions or having to have energy expenditure on cooling. All these operating factors could also impact your decision, as weather and proximity to energy producers can impact your bottom line

On the other hand, your fund may not want to invest in legacy energy reserves and require a company that meets your ESG mandates. In that case, there are several bitcoin miners using renewables or stranded electricity—such as excess power that isn’t used by a regional grid—to reduce their carbon footprint.

What are the different bitcoin mining stocks?

If you’re looking to do research on possible bitcoin mining companies or simply want to track their performance, then check out the following companies.

Do you invest in bitcoin companies be that miners, exchanges, or startups? Let us know in the comments down below.

South African bitcoin pleb falling down the rabbit hole and willing to share every bump, scratch and knock along the way
View more articles from this author
PrevPreviousHow To Earn Bitcoin From The Sun With Sun Exchange
NextWhat Is Bitcoin Leverage Trading?Next