Why Play To Earn Games Are Better With Bitcoin

Home » Articles » Why Play To Earn Games Are Better With Bitcoin 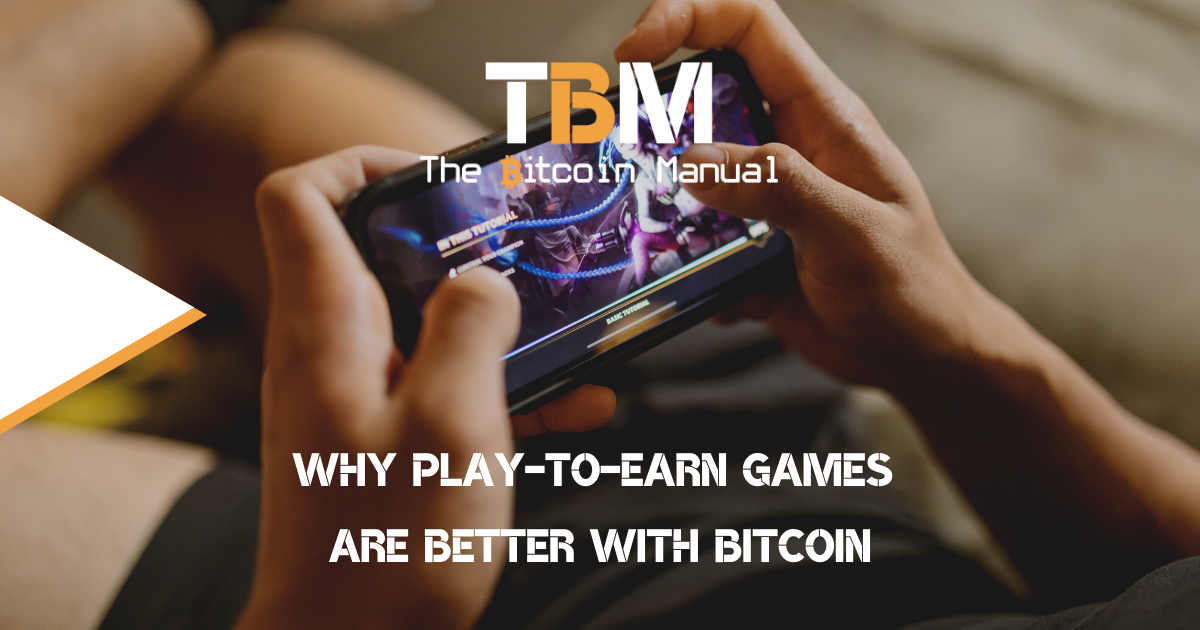 Gaming has grown as an entertainment medium as technology has improved, we’ve moved from arcade games to computers and home console gaming, and once smartphones and tablets came out, mobile gaming was born. Gaming transformed from a niche interest to a global industry worth billions as even more people started gaming on their daily commutes or in their spare time.

Today gaming has become a profession, with elite gamers pulling in millions per year. The younger generation has been bred on it; they can barely put together a sentence but could probably lay down a beat down with the best in battle royal game installed on your smart device.

Gaming eCommerce is nothing new

When MMOs started becoming popular, and players were able to acquire unique items and then trade those items between accounts, the introduction of digital trade turned seemingly worthless digital items into items holding some value.

To encourage this trade and keep users engaged, game developers can either run their own marketplaces, like Steam marketplace, where they can take a cut out of market transactions, or outsource that work to players who find creative ways of creating a currency inside the game.

Gaming publishers have looked to devise all sorts of micro-transactions to keep gamers spending to either customise their characters, access new features, or get a leg up on the competition. Until now, that value has been locked in walled gardens controlled by publishers and can quickly become a black hole for your disposable income if you’re not careful.

In a bid to keep gamers playing, publishers have looked to reward users with points, in-game currency, and special achievements, but you could never extract that value short of selling your account or items to another player.

As more money is thrown into gaming, it was only a matter of time before companies looked at how they could leverage blockchain technology and combine the two growing trends. We’ve seen an explosion of games using bitcoin and other digital assets in the last five years, and it’s only going to grow larger.

The primary issue with in-game trading economic systems is that it is not scalable; gaming is a global phenomenon, and people all over the world want to access these platforms. Trying to manage the difficulty of converting fiat into the video game currency or converting in-game currencies into real-world currency such as USD, EUR, GBP, JPY, and RMB has been a hurdle no game could leap over.

Players have had to resort to P2P markets like chatrooms or set up third-party marketplaces to try and trade the value they acquired in games.

What is play-to-earn (P2E) gaming?

Play-to-earn is a business model that leverages digital assets hosted on a blockchain. Players can play a game instead of earning in-game currency, points, or tokens; they can earn bitcoin or in-game items with a marketplace where the goods are priced in bitcoin or settled in bitcoin.

In play-to-earn games, players are encouraged to perform certain actions, check-in on the game daily, or acquire certain items of potential value in the game while they can also be converted to real value. These mechanisms can encourage a loyal user base, regular interaction with the game, and, in some cases, turn into a full-time income.

As is the case with anything using bitcoin, the shitcoins aren’t far behind, and we’re seeing P2E games bootstrapping their native currency where they have control over the supply and economics.

Games may be big business, but they are still a business; they need to make money to remain in operation. Gaming developers need to pay for servers, staff, and a host of other expenses to keep the game running. Like any business sector, the majority will fail. Some games won’t gain enough traction to remain sustainable or to meet their debt obligations and go bust.

If you’re playing a game and earning their native currency and the game goes bust, there’s no floor for that token, and it’s going straight to zero. The gaming developers have no income to provide a buy wall for you to get out, while players will panic and want to secure as much value as they can, leaving the rest with a honeypot situation.

If you’re one of the unfortunate players to not react in time, all that effort you put in and all those paper gains you thought you had will end up being worth zero.

Instead, if a game is using bitcoin, and you’re earning satoshis, you’re assured that the value you earned in the game will always have value. It’s backed by the bitcoin network; you don’t have to rely on some central gaming publisher and their backers or hope other gamers will want to buy some random token.

You know you have global demand for what you’re earning, and if you ever want to purchase something outside the game, it’s pretty straightforward.

Earning in-game tokens might be attractive to players because of the current dollar value you see when you check coin prices, but you’re relying on a small niche of players to place a demand on the token. The only way you’re able to sell your token is either by another player requiring it or the game publisher backstopping the order book.

If the game starts to become less profitable or other games are offering better terms for players, the player base erodes, and with it, the demand for the token.

Gaming tokens are also subject to slippage; you might have a large number of tokens that represent a certain value, but when you try to sell it, you place downward pressure on the market, pressure the market cannot absorb, and as a result, you can never realise that value you earned playing the game.

Gaming tokens are also a one-trick pony, maybe you’re overplaying this game, and you want to move on to another game; you’ll now have to swap it either for another game token or stablecoin. This can involve speaking to another blockchain, setting up another wallet, and adding unnecessary complexity.

As for the bitcoin gaming ecosystem, you can take your satoshis from one game to another using the Lightning Network or Liquid Network for a lower fee and trading issues or having to swap wallets.

When you’re playing a bitcoin game, sure, you’re at the mercy of the game-changing the way it does payouts, the way it rewards you, and the amount it allocates to certain actions. If a game is no longer worth your time, you can always take your satoshis, withdraw them from your wallet and move on to another game.

The value you acquired is not at risk once it’s in a non-custodial wallet.

When it comes to other digital assets on different chains, you’re exposed to a host of risks such as the chain being hacked, the smart contract having vulnerabilities, bridges between chains can be exploited, and even developers draining funds or changing the tokenomics on-chain.

When you play games, you’re giving up time, you’re putting in the effort, and you’re helping a gaming ecosystem, so why should you be rewarded with subpar value. Bitcoin games may not seem like good value if you’re measuring in fiat and comparing it to what you can earn with altcoin games, but you’re not pricing in the possible risks of that token when you make the straight value comparison.

You’re not factoring in the slippage and the demand for that token and if you can secure that value now and in the future.

The sats you earn today will continue to reward you the longer you hold them, and who knows, being an early adopter of bitcoin games could turn into a very profitable venture in the long term.

The same way those who jumped on faucets or meme shitposted for tips online happened to secure themselves a pretty portion of the bitcoin network.

Do you play any bitcoin games? Which game is your favourite? Let us know in the comments section down below.

South African bitcoin pleb falling down the rabbit hole and willing to share every bump, scratch and knock along the way
View more articles from this author
PrevPreviousWhat Is A Partially Signed Bitcoin Transaction (PSBT)?
NextWhat Is A Lightning Email Address?Next