What Happens When An Exchange Goes Bankrupt?

Home » Articles » What Happens When An Exchange Goes Bankrupt? 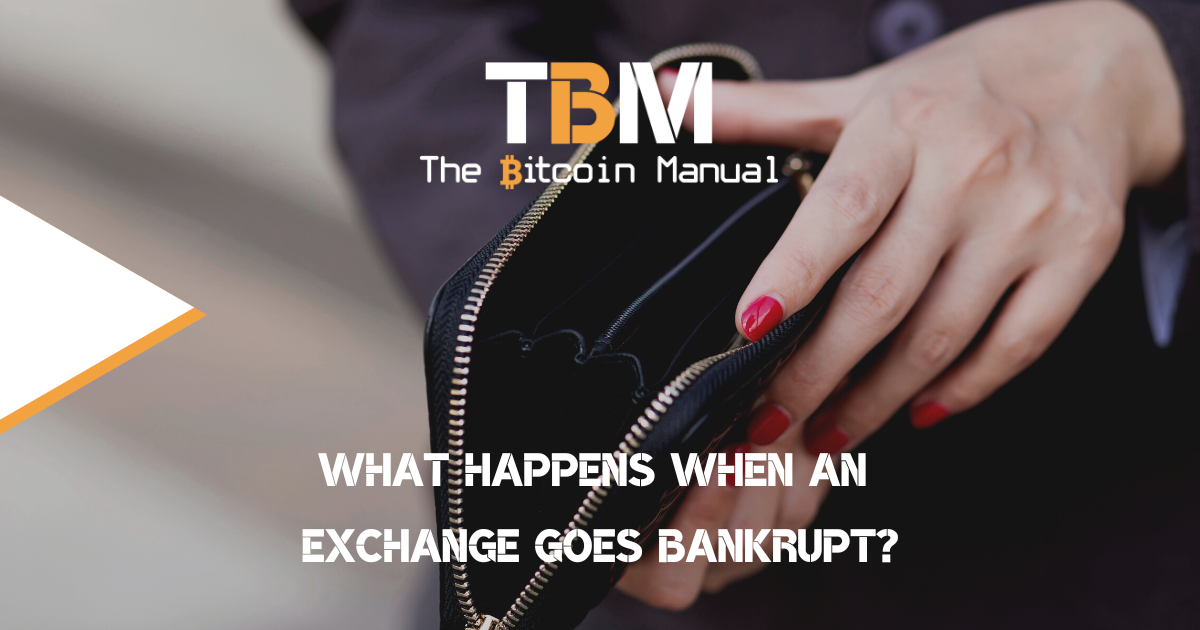 It’s been a disastrous few months for cryptocurrency exchanges and their customers, with exchange after exchange falling into the depths of insolvency and filing for bankruptcy. As one domino feel, the intertwined nature of the cryptocurrency market has seen contagion spread leaving exchanges exposed without access to the capital that was pledged to them by their customers.

Companies like Celsius and Voyager operated much like banks, taking customer deposits and lending them out or making risky gambles on so-called decentralised finance products to generate high yields or providing those funds to hedge funds which would trade using the capital and kick up interest payments for the capital they borrowed.

The issue here is these companies took counter-party risks they didn’t account for in their lending strategy. The collapse of high-profile Ponzi coin Terra Luna and crypto hedge fund Three Arrows Capital took down many of these crypto exchanges. The need for additional leverage saw massive rehypothecation of funds, and accounting tricks allowed these companies to remain in operation as long as bitcoin prices trended upward.

As soon as it reverted, the lies, such as fabricated collateral, began to unravel, culminating in the fall of FTX. As the dust settled, these functionally insolvent companies had no investors to turn to for a bailout or lending facilities. The only option was to file for bankruptcy, leaving customers and their deposit claims in limbo.

Investors who had their funds tied up in one of the affected exchanges have an uphill battle ahead. To give you an idea of the worst-case scenario, creditors of Mt. Gox, which went offline in 2014, are still waiting to get repaid billions of dollars worth of bitcoin.

There is no deposit insurance.

Cryptocurrencies aren’t regulated, while bitcoin is seen as a commodity, meaning they don’t offer people the same protections they would get with money held in a bank or shares in a brokerage firm.

For example, the U.S. Securities Investor Protection Corporation insures traders up to $500,000 in cash and securities if a member broker runs into financial difficulties. The Federal Deposit Insurance Corporation, meanwhile, offers bank depositors protection of up to $250,000 if an insured lender fails.

Depending on your part of the world, these deposit insurance guarantees by your government may differ. Still, the idea behind it is if a financial institution is responsible for customer funds does go insolvent, there will be a limited bailout for customers through deposit insurance.

While this does provide a safety net for customers, it also allows institutions to go out and take more risks knowing that someone else would pay for those mistakes.

Once you deposit your funds into a cryptocurrency exchange or purchase bitcoin and leave it with an exchange, those funds are the property of the exchange; all you have is a paper claim to one day honour a withdrawal. You might be a customer, but your status is that of an unsecured borrower; you are providing the company with funds with no preferential claim on those funds.

When the cryptocurrency exchange becomes insolvent, it means it has too many claims from depositors and too little capital on its books to pay everyone out should they all wish to withdraw their funds. If the exchange were to remain open, it would turn into a first-come, first-serve, and those that withdraw early would draw down the remaining capital in a bank run, leaving the rest with claims and no capital.

Who gets priority during bankruptcy?

During Chapter 11 bankruptcy proceedings, there’s a clear hierarchy of who gets paid for the remaining assets. Even if a company owes a considerable amount of money, such as billions more than it has in assets, investors may not be left empty-handed.

Under Chapter 11, the bankrupt company must produce a detailed schedule of assets and liabilities, among other financial statements and reports. Funds that can be unlocked, reclaimed and clawed back are identified and consolidated, while certain assets may even be sold off to acquire the liquidity needed to process the claims.

During the bankruptcy process, the company, lawyers, and a bankruptcy judge work to figure out who has priority claims, the size of these claims and who should get the remaining funds.

When the pool of assets to be returned to individual investors is calculated, everyone is notified of the pro rata share they will receive. For example, if the company owes $100 million to customers and has $90 million left after paying off debt, then customers would get approximately 90% of their deposits returned.

So, in this case, you would receive 90 cents for every $1 worth of claims you had with the exchange.

While there is a chance that they will get something back—even if it’s just a portion of their original investment, as in the example above, it’s not a hard rule, and each case is different. Depending on how large the damage to the balance sheet and how extensive the claims are, there’s a risk that investors could get no money or bitcoin back after bankruptcy.

How to recover funds from a bankrupt cryptocurrency company

To use these centralised services, you would have completed the know your customer (KYC) requirements when you created your account with legitimate information. The company should have your contact information and an accounting of what you’re owed on file via the internal trading engine and database management.

If the company goes bankrupt, you should ideally hear from them right away with information on recovering funds.

Companies will employ their own process to distribute funds to customers. That may require you to follow up by completing forms, confirming your address or payment information, and keeping up with any other necessary paperwork; depending on the claims process, you could be asked if you want your funds returned in bitcoin or cash.

Bankruptcy is a long, painful process.

A bankruptcy at any financial institution, be it with cash or bitcoin, can be stressful, confusing, costly, and most of all, frustrating. There is nothing more infuriating than being told you no longer have access to funds that you worked to acquire, even if you willingly handed it over to a third party.

In the cryptocurrency industry, there are plenty of poorly run operations, and due to the lack of oversight, losses can be even worse. If you are stuck in a position like this, your best option is to write off that investment down to zero.

This is not only in a financial sense but a psychological sense too; holding out holding for a certain outcome will only feed into your anxiety. In cases like this, it’s best to move on, learn from your mistakes and take full custody of the other funds you can access. Move them in hot wallets or cold storage, and don’t allow anyone to have signing rights to your keys.

Once you’ve secured what you can under your control, you must let the bankruptcy process pan out to determine exactly what you’ll get back. If you find yourself involved with a bankrupt crypto company, keep close tabs on communication via press releases, email or social media for information on how to file a claim and get as much of your money back as possible.

As mentioned in the Mt Gox case, bankruptcies can run on for years, so don’t put your life and investing on hold because of this bad experience; rather, move on swiftly and try to recover from this loss.

Self-custody is your best security.

Bankruptcies are painful, and in the traditional markets, the only way to avoid it would be not to invest using certain companies because you have no choice but to take on custodial risk. Cryptocurrency company bankruptcies are rather ironic since the entire idea behind having completely digital money is to be able to hold any amount of funds without counter-party risk.

When you purchase bitcoin on a crypto exchange, your funds are immediately stored in your exchange-hosted wallet (a custodial wallet), meaning that specific exchange controls your “private key,” and only they have the right to move it.

If, however, you requested a withdrawal to a wallet where you own the private key, be that a software hot wallet or a cold storage signing device, you would have no issues accessing those funds regardless of the state of the company where you purchased the bitcoin.

A non-custodial wallet gives users complete control and is the only way to claim you are “holding bitcoin.”

Exchanges are not your friend.