What Is A Crypto Exchange Bank Run?

Home » Articles » What Is A Crypto Exchange Bank Run? 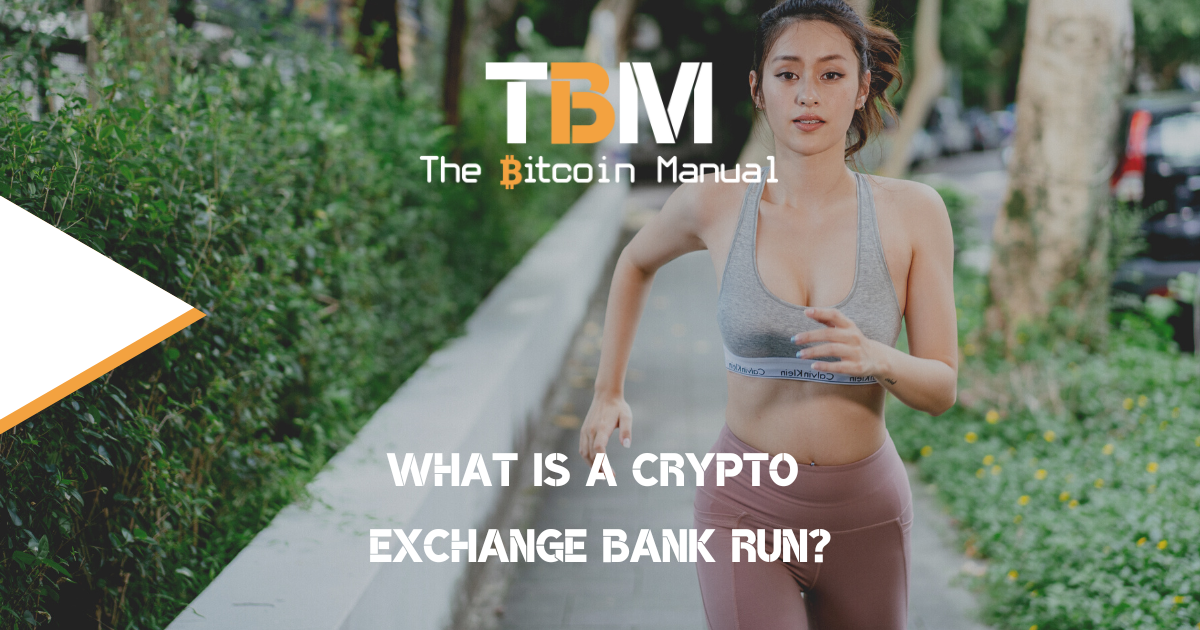 There is no single path into bitcoin, but some are more common than others. Many of us start our bitcoin journey through the centralised exchange on-ramp as it is the most familiar and convenient of the options available today.

Approaching a financial institution and trusting them to honour the swapping of your fiat to bitcoin is now commonplace. The business model has grown with each adoption cycle, and at the height of every bull cycle, crypto exchanges seem like they are untouchable money-printing machines.

While these businesses have grown rapidly, they are far from infallible, and we have seen some big casualties along the way. Mt Gox being one of the most famous examples, followed by the big one in recent times, FTX.

Despite all the capital raised, the marketing and the celebrity endorsements, the latest iteration of exchanges carry the same risks as any other. The latest set of implosions is a reminder for those of us who have been here long enough while serving as an example for new entrants who get to enjoy a peek behind the curtain.

The fragile nature of cryptocurrency exchanges is nothing new, as many of them are taking somewhat “calculated” risks in the rehypothecation of a scarce asset like bitcoin, thinking they won’t get called on their reserves.

However, if there is unrest in the market and redemptions exceed their expectations, it can result in a bank run.

What is a bank run?

A bank run occurs when large numbers of depositors request to withdraw their money or, in this case, bitcoin simultaneously from a financial institution like a bank or cryptocurrency exchange. The main driver of a bank run is the fear that funds might be locked, might not be there or that the bank will run out of money.

Bank runs were more common during the physical cash era, but once we moved to digital money like credit cards, debit cards and electronic transfers, it greatly reduced the odds of a bank run. As more transactions were settled internally by banks debiting and crediting accounts, they are able to reduce the need for customers to demand physical money and make bank runs less likely.

While unlikely, every bank has the capacity for a bank run should customers demand cash, as banks carry a limited amount of cash versus the assets they hold under management. Another reason why banks may not experience bank runs is due to governments backing them when needed or offering deposited insurance schemes for primer brokers.

For cryptocurrency exchanges, however, this is a real danger since bitcoin is a digital asset that you can self-custody with very little effort. If large numbers of users demand the withdrawal of the same asset within a short period of time and the exchange hasn’t backed reserves properly. Eventually, they will run out of bitcoin and won’t have the ability to honour redemptions.

How does a bank run work?

Exchanges often run on the assumption that a certain amount of bitcoin will be withdrawn from their service every day and keep funds on hand to service their demand. Exchanges are meant to keep the rest of their customer funds in cold storage, which might take longer to access but are still accessible and can be handed over to the user.

Where the issue comes in when customer funds are backed by illiquid assets on the exchanges balance sheet. Instead of having the bitcoin, the exchange could have deployed the funds to do activities like:

If an exchange has capital tied up in certain ventures or is simply insolvent, they leave itself exposed to a bank run. If ever a large number of depositors felt the need to withdraw funds, that exchange would run the funds.

For cryptocurrency exchanges, bank runs can be devastating to investors because they can halt operations for the business temporarily or, worse, permanently.

What causes a bank run?

There are several reasons why a bank run could start; it could be due to the risk held by the financial institution eroding customers’ confidence. It could be due to poor economic conditions, where customers prefer to hold the bearer asset instead of an IOU.

In the case of crypto exchanges, bank runs are often the result of the mismanagement of customer funds.

A bank run can range from being a short-term pain to an absolute death blow for a financial institution depending on factors such as illiquidity or insolvency. If an exchange can fully pay off its creditors once its investments mature or after liquidating them in an orderly fashion, then it is solvent but illiquid. It can safely honour customers’ withdrawals in the future once it unlocks the required liquidity.

If, however, the assets on the balance sheet do not match customer obligations, then the exchange is insolvent, and a bank run would see the reality of its poor financial decisions exposed.

Effects of a bank run

There are several short and long-term effects of a bank run, and it can affect all parties involved in different ways.

Effects on companies and crypto exchanges

If a bank run occurs and a crypto exchange doesn’t have enough cash or bitcoin on hand to handle it properly, it can lead to distrust in the brand. Even if another institution or central bank bails out the company or exchange, holding customer funds — even for a short period — may result in fewer customers or a cohort of customers closing accounts and migrating to competitors.

Depending on the speed of the bank run, customers may not have much time to react. On a cryptocurrency exchange, panic can spread very quickly, and since bitcoin is a bearer asset, the barrier to driving a bank run is low.

The first users in a bank run tend to make out unscathed. It’s the later ones that might have to either wait as the exchange secures credit or liquidates other assets to pay.

If the exchange has a native token or a publicly traded stock, you could see that it starts plummeting in value as the exchange sells off to try and secure liquidity before market actors can react. This can create a snowball effect, causing the platform or its asset to become worthless in a matter of hours or days. Should the exchange shut down or an asset become virtually worthless, customers can lose their entire investment.

In the case of bankruptcy, customers might have to accept partial repayment of their original balance.

How to protect yourself during a bank run

The best way to protect yourself from a bank run is to limit your exposure to the exchange in the first place. If you’re planning to use a centralised exchange where you have no signing rights to your funds while held with them, the best option is to limit the time you leave your funds with the service. Set up a hot wallet or cold wallet and regularly withdraw your bitcoin.

The less time you spend on exchanges, the less risk you take with a large number of funds, so ensure that you have a regular withdrawal practice and also generate a new bitcoin address before you schedule a withdrawal. If your exchange allows for X-pub support, you could submit your X-pub, and it will draw a new public address for your withdrawals automatically.

By committing to regular withdrawals, you not only test the company’s solvency every time, but you keep them from being able to hypothecate too much of their customer funds because you’re always drawing down the bitcoin float.

PrevPreviousWhat Are Optimistic Rollups?
NextWhat Is A Bitcoin Deleveraging?Next