What Are Optimistic Rollups?

Home » Articles » What Are Optimistic Rollups? 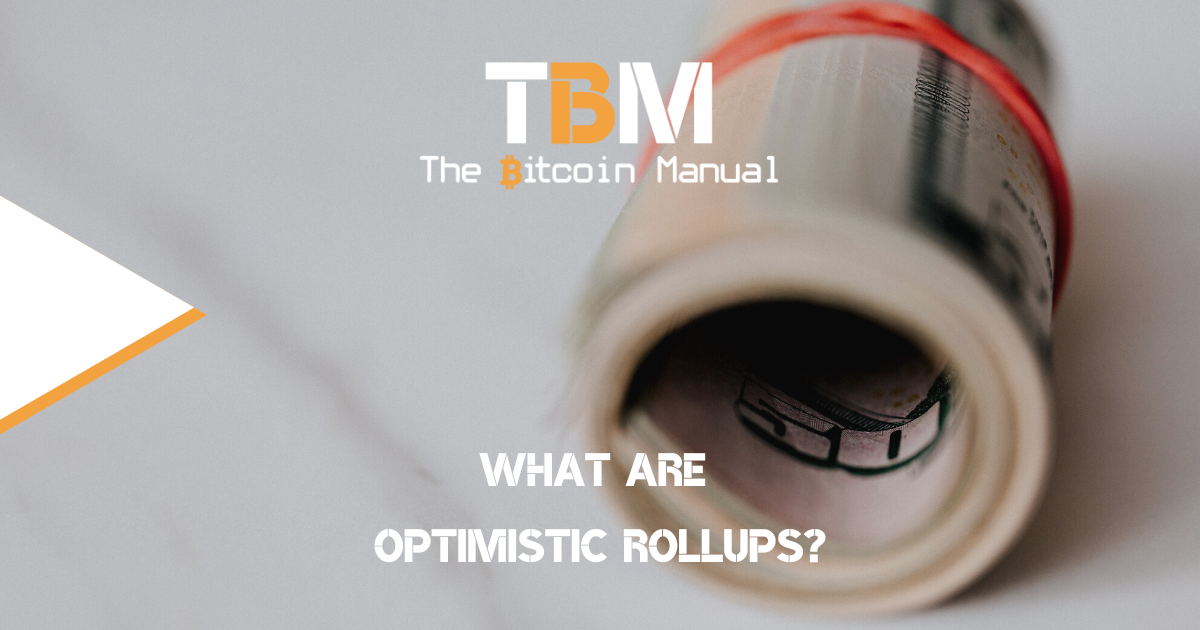 Scaling the bitcoin blockchain was never going to be nor intended to be a once of solve or one solution, but rather a combination of different trade-offs. The Liquid Network and Lightning Network are the first publicly available attempts to move transactions off-chain and reduce the need for on-chain block space.

The bitcoin time chain is purposefully built to be slow and expensive to give users confidence in its final settlement and act as a deterrent to those who wish to spam the network. Having transaction fees and limited block space is critical to ensuring a healthy network. Still, it does mean that there is a limitation in how many transactions can be processed every 10 minutes with a new block.

If blocks aren’t going to be made bigger anytime soon to ensure decentralisation and the ability to run bitcoin as low-tech as possible, then moving transactions off-chain or limiting data pushed to the chain is the rational option.

That thinking is why layer two systems, such as rollups, have emerged. Rollups process transactions on another, faster environment (known as layer two), then port the transaction data back to the parent blockchain (layer one or mainnet) at a fraction of the price. This means that users can benefit from the speed and cheapness of the rollup while also benefiting from the security of the base blockchain.

Optimistic rollups are one of the different flavours

They are called “rollups” because they aggregate (“roll up”) thousands of transactions into batches before submitting them on Mainnet.

What is an optimistic rollup?

A network of external validators checks the Merkle roots to ensure they are correct before the state is updated sometime later. If an inconsistency arises, then the validator can publish a fraud-proof during the dispute period, which can cause the system’s state to be rolled back to the previous valid state.

Advantages of an optimistic rollup

The primary advantage of an optimistic rollup when compared to its zero-knowledge equivalent is that they are more generalist and can support smart contracts in a similar way to the underlying smart contract-enabled blockchain. Native support for smart contracts within the rollup means that apps can be launched much easier, without the need for additional development.

Disadvantages of an optimistic rollup

The main downside to optimistic rollups compared to zero knowledge rollups is the time that it takes for layer two users to be able to withdraw their funds back to the underlying blockchain. As an optimistic rollup has to rely on external validators to check the Merkle roots for ‘cheating’ before the state can be updated, there needs to be a sufficient amount of time for validators to check and challenge the activity that has happened on layer 2.

Rollups are tethered to the base chain and provide core security guarantees once you settle to mainnet, but as with any off-chain processing, there are still come with some risks relative to the bitcoin mainnet.

A rollup’s smart contracts can contain bugs – not unlike any other program and while fail-safes and audits should help prevent exploits, relying on an external program to handle transactions will always carry some added risk.

Both types of rollups are also still in an experimental phase, and as such, the networks on which they operate are often somewhat centralised. In some cases, the developing team behind a rollup maintains partial control over the network and can theoretically pause or switch it off wherever they like.

Many rollups also continue to rely on centralised “sequencers” to coordinate transactions on the layer two chain efficiently.

Optimistic rollups as applied to bitcoin

In the case of bitcoin, however, John Light recently posted a research report on how Validity Rollups could be added to bitcoin’s layer 1. While no exact Bitcoin Improvement Proposal is pushed forward, the suggested changes required might include a combination of recursive covenants and specific opcodes for validity proof verification.

While covenants would be a change to the bitcoin base chain, it would bring along with features too and only form the base for rollups. Once covenants are established, they can enable entirely new functionality to be added to their parent chain without needing additional consensus rule changes.

Covenants are currently live on the Liquid side chain, which might be the perfect testing ground for the validity of rollups and how they can be stress tested.

How a rollup on bitcoin would work

A Layer two optimistic rollup would, in theory, be built on bitcoin L1 and have its own set of nodes supporting the software, which would create a distributed execution environment that supports more flexible smart contract languages or more advanced privacy technologies, with no other changes needed to bitcoin base chain and its net of nodes.

Users who wish to broadcast to a rollup environment would have their transactions handled by these nodes and housed in a Merkle tree, and only the state of that Merkle tree would be broadcast back to the base chain.

So rather than being aware of the specific consensus rules of the rollup and knowing how to execute transactions by following those rules, the parent chain full nodes only need to know how to verify the rollup validity proof.

Fraud proofs are the main concern of rollups, as we do not want to create double spending issues at the core for optimistic rollups. To tackle the possible fraud exploits, exploring the possibility of implementing optimistic rollups with MATT covenants and time delay to withdraw seems a promising direction.

Because of the simplicity of the required changes to Script, this might answer some of the costs and risks analysed in the report while providing many of the same benefits. Notably, no novel cryptography needs to become part of bitcoin’s layer 1.

Optimistic Rollups would probably require a fully recursive version of the covenant (while fraud proofs alone are possible with a limited recursion depth).

If you want to learn more about optimistic rollups on bitcoin, use this article as a jumping-off point and don’t trust what we say as the final say. Take the time to research; check out their official resources below.

PrevPreviousWhat Is GBTC?
NextWhat Is A Crypto Exchange Bank Run?Next