What Is A Bitcoin Deleveraging?

Home » Articles » What Is A Bitcoin Deleveraging? 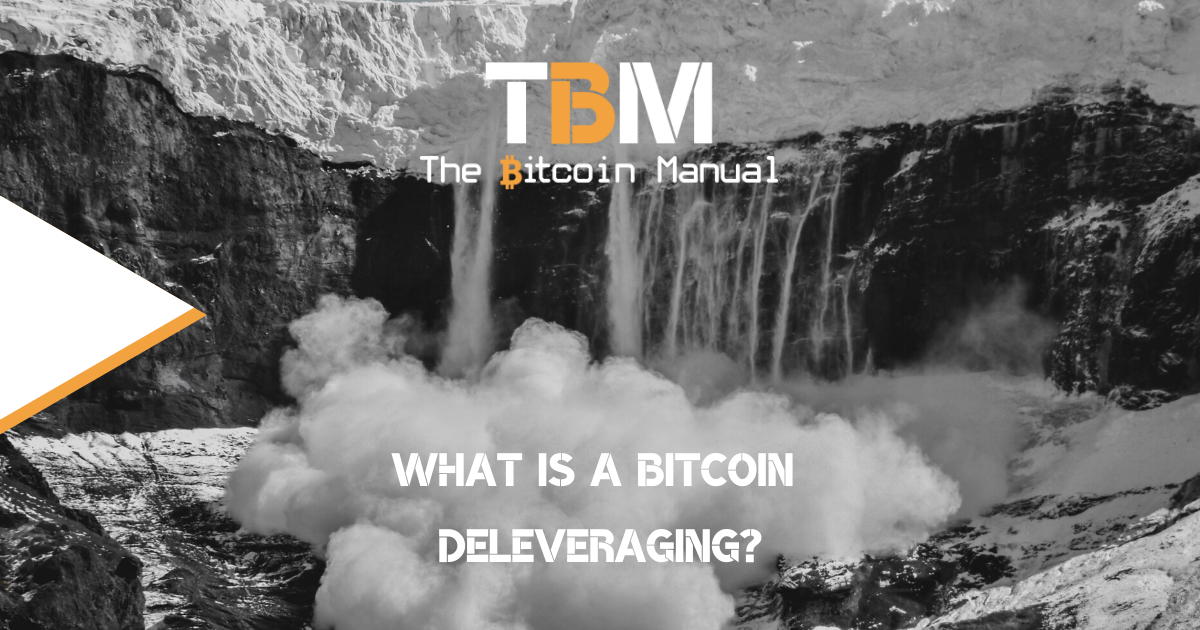 During times of rampant speculation, market participants, be they exchanges, venture capital or even retail investors, can get caught up in the idea of perpetual profits. This is where leverage comes into play; instead of simply using capital available, loans are issued to find the continual profit chasing, and it might work as long as the bitcoin price continues to rise.

But betting on the price direction of an asset while using leverage may seem like a smart play when it goes your way; the instant it reverts, it can clear you out along with anyone who thought along the same lines. The unwinding of credit built into bitcoin bull markets can cause a massive deleveraging that can be violent and can often leave the market in a gully for some time once the dust settles.

Deleveraging is when a company or individual attempts to decrease its total financial leverage. In other words, deleveraging is the process of reducing debt and the opposite of leveraging. The most direct way for an entity to deleverage is to immediately pay off any existing debts and obligations once the loan is paid back; you have no exposure to risks like margin calls or refinancing with unfavourable terms.

If the party holding the leverage cannot do this, the company or individual may be at an increased risk of default or, worse, end up bankrupt as income simply cannot match the debt obligations.

When forced deleveraging happens, the business or individual is stopped from their position, the collateral available is liquidated, and the debt is settled. The debt could be settled fully or partially, but the loan agreement will be terminated.

The risk gets built into the system.

Leverage doesn’t simply magically appear in bitcoin markets; the bitcoin network and its asset simply carry on as normal, churning out blocks and securing transactions. The leverage itself has nothing to do with the bitcoin network and everything to do with how investors approach secondary markets such as trading bitcoin, mining bitcoin or facilitating the buying and selling of bitcoin.

Leverage is often associated with trading, but it’s not the only market actor taking on debt to finance its operations. In the case of traders, however, they may take out leverage with a platform through margin trading accounts.

If the platform doesn’t offer margin trading, they might use bitcoin to secure loans with a lender and then move that to an exchange to trade. Alternatively, investors might take out secured or unsecured fiat loans to purchase bitcoin.

Every bitcoin deleveraging has a different catalyst; in the latest 2021/22 cycle, the process started last month when the Luna-Terra Ponzi blew up spectacularly and was forced to liquidate approximately 80,000 bitcoin.

The process accelerated due to contagion spreading in the system when Celsius, Three Arrows Capital, and Babel Finance proved to be overextended in exotic high-yield token projects that crashed hard and, in the case of Babel, lending to those overextending in these projects.

This only led to the forced selling of bitcoin with margin calls and exposing company balance sheets that had been sitting on illiquid tokens, such as FTX, that became the latest casualty.

Bitcoin miners are businesses that purchase equipment and electricity and compete for new bitcoin issuance and transaction fees every ten minutes. The standard operation would see miners sell some of their bitcoin to pay for expenses.

In the case of bitcoin miners, bull markets are when these operations can book serious profits, and when the asset price is increasing, it encourages miners to hold on to their bitcoin. Instead, miners may take out loans hoping they can sell bitcoin later to cover their borrowing or expand their operations, thinking they can secure even more bitcoin and cover those debt obligations.

If the price starts to fall and competition doesn’t follow, these miners might find themselves owing money they cannot pay back and be forced to shut down if they cannot refinance.

Benefits of a deleveraging

Deleveraging might sound like a dark and gloomy subject, but it is a natural way of reverting to the mean; this is how markets work; they might be temporarily dislodged, but they will always find an equilibrium. Bitcoin will have its boom and bust cycles as we reprice the asset based on supply and demand, and mass deleveraging is healthy for a few reasons.

First, it reduces the amount of interconnected risk throughout the bitcoin market, like cutting off dead branches on a tree to allow the healthy ones to grow. Consider deleveraging the purge of the weakest points in the system. While it might hurt in the short term, they are, but growing pains and rewards accrue to the strongest points in the bitcoin ecosystem.

The second reason deleveraging is a positive is that it reduces the misallocation of capital. During bull markets, capital is thrown into just about anything. It can be unsound business models like CEFI lenders and Ponzis masquerading as DeFi protocols, lending to short or long bitcoin and back derivatives trading.

All these actions are non-economic or provide a negative return on capital.

In deleveraging, many investors will get burned. Still, they receive valuable lessons such as not investing in altcoins, not trusting influencers, not leaving their bitcoin with third parties and, as a result, becoming better at managing their money.

Don’t use leverage with bitcoin.

When living in a fiat system, you’re conditioned to chase yield to try and outpace inflation. As inflation compounds, the need to secure higher yields drives capital into places it should never be, as investors try to squeeze out every drop of profit with over-financialisation.

Due to the normalisation of deploying capital far out on the risk curve that the fiat system has brought, a cohort of investors is numb to the red flags and feel comfortable playing fiat games with a scarce asset like bitcoin. Those that opt for leverage may earn short-term profits but will find long-term gambling on the price a hazardous occupation with bitcoin a cruel mistress. If you don’t respect the fundamentals of fixed supply, you will be wiped out with the tide when the currents reverse.

While some will learn from the latest bear market, there will always be a new class of bright-eyed bitcoin owners who think they can do better than the market. They will be offered leverage and will be whipped out like their predecessors, and this is a lesson that will be repeated over and over.

As investors in bitcoin mature, the market should self-correct, and individuals who understand the USPs of bitcoin will opt for products that allow them to have control of a key or keys within a quorum when interacting with third parties or trying to extract yield from their bitcoin.

Since you do not need to generate a yield, bitcoin is a perfectly scarce asset that should increase in purchasing power over longer timeframes, so picking up pennies to potentially lose fortunes will become a fool’s errand.