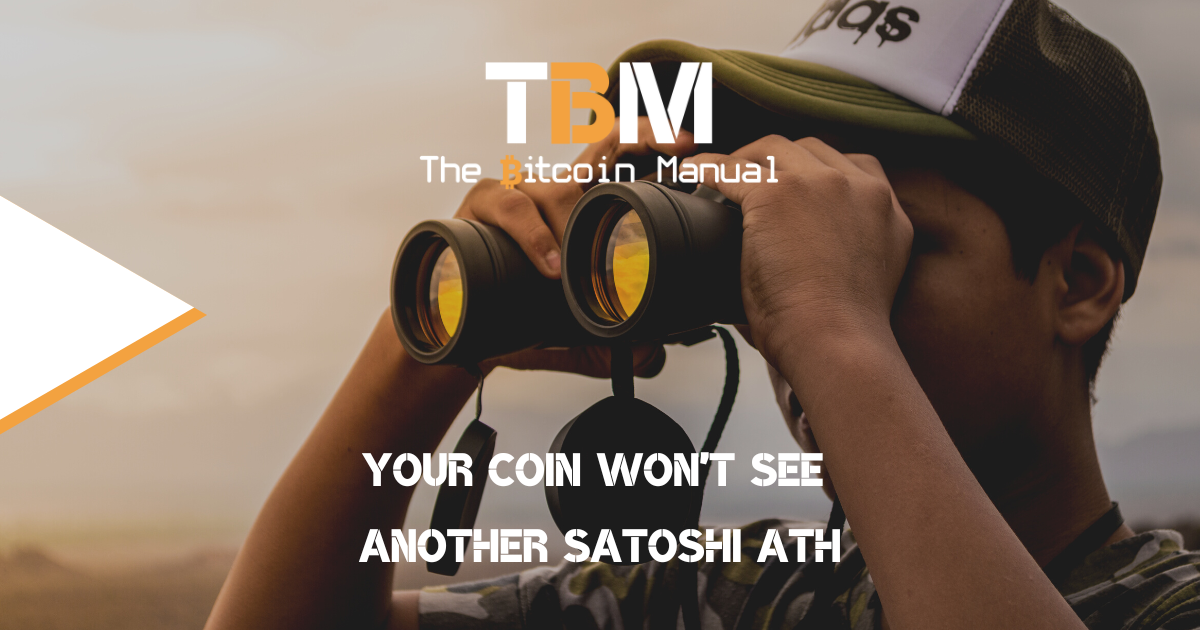 When we talk about digital assets, the market is dominated by Bitcoin (BTC). As bitcoin continues to onboard users, draw in more liquidity, and expand to new markets, you will see imitators launch to compete for market share. Whenever a new revolutionary creation rolls around, you will see cheap knock-offs trying to fool people into purchasing a “cheaper” or “better” version.

The digital asset space is no different, and every year we see a new batch of competing tokens called alternative coins or altcoins. With so many alternatives out there, investors need to navigate a labyrinth of marketing, double speak, fallacies, lies, and obfuscations, as well as needing a clear idea of how bitcoin works before they can even understand why altcoins are failures waiting to happen.

Altcoins market themselves as experimentations or innovations; they live in this grey area and pretend to be variations of bitcoin when in fact, altcoins are companies that use tokens to acquire retail capital and bypass a lot of red tape that is required in traditional finance.

In other words, developers create altcoins as pseudo equity and use them to attract capital from retail without having a real product, functioning business, product-market fit or even a path to profitability. Altcoins are not crypto, nor are they currencies; they are all unregulated securities that try to avoid having the Howey test applied to them.

The promise of altcoins

When deciding to purchase bitcoin versus an altcoin, the narrative is that bitcoin is too expensive, it’s slow, or it’s going to be replaced by better technology but the primary motivation behind any altcoin pitch is that it will outperform bitcoin and make you more money.

Now for most of us, we’re not expert traders; we’re looking for a place to store excess value and hope that it will increase in value over time, protect current purchasing power and appreciate purchasing power over time.

If that is your goal, then holding an altcoin is not going to hold up to scrutiny when compared to bitcoin. In the entire history of bitcoin, over a long enough time frame, no altcoin has been able to hold its all-time high satoshi value, and when we compare unit for unit, all other networks tokens are guaranteed to debase versus bitcoin.

While altcoins can promise and sometimes deliver on outperformance of bitcoin for one cycle, they cannot promise it for more than that. That’s why the altcoin game is a constant game of musical chairs in search of the coin that has the lowest supply, lowest supply coming online and the highest demand going in for a specific period.

So why do altcoins fail in holding value against bitcoin? Well, there are several factors that come into play, namely:

I think it’s pretty well known what bitcoin’s monetary policy is, a hard cap of 21 million, with 900 coins created every hour, until the next halving. It’s easy to understand and predictable, while all nodes enforce the rules and all bitcoins abide by them.

Altcoins have million, billion, trillion and more units; some have infinite supply caps, they have different inflation rates, and they can all change on a whim, normally at the expense of retail investors. The central powers are happy to take a haircut in unit price when they can increase the supply for themselves and continue to dump on retail. These manipulative tactics to keep value accruing to the central entities behind these coins are one of the primary drives of the devaluation of coins versus bitcoin.

They simply cannot help themselves; the incentive is to migrate value from retail to the founders and insiders, which always has been and always will.

Bitcoin removes this temptation and is the reason why the bitcoin network has a restrictive and enforced monetary policy for a reason to protect everyone who stores value and ensure they are never diluted.

The flavour of the moment

Altcoins come and go; there is no altcoin that has been able to hold a top 10 position for very long; while bitcoin remains number 1 year after the year, the rest fight it out for attention and market share and, of course, new retail buyers. Since these coins offer little by way of innovation, product-market fit or have a business model that could be profitable in the future, it’s all about creating new narratives.

These narratives change with the seasons, and you’ll see new jargon terms thrown around as these companies try to come up with collective ideas to attract capital. ICOs, NFTs, DEFI and the list goes on; there’s always a new trend and with a new trend means, capital flows from one to the other; some coins benefit and others don’t.

As new coins come online, they dilute the amount of capital stock with even more supply of tokens and eventually begin to dilute one another as altcoin buyers make less and less concentrated bets and buy smaller positions in a range of altcoins.

When an altcoin is launched, it either generates funds from seed investors such as angel funds and VC funds to build out the code and the infrastructure to run the network. It then requires funds to market the coin, get listings on centralised exchanges, provide liquidity on DEX’s and a host of other upkeep tasks like developing new features, market making and paying staff.

Once an altcoin hits the market and retail can access it, those tokens they purchase come from the initial distribution to the venture capital funds and seed round investors. Once they’ve made a profit on their initial investment, they’ll move on to new projects they can fund for an exit.

As they move on, it’s up to the project developers and staff to find new sources of liquidity, either through creating a product that people want to use or sourcing new liquidity providers. Sadly, for most projects, they eventually run out of capital and then start to sell their tokens into whatever retail demand they can find. Once that happens, you’ll see a steady decline in the token price, first in bitcoin terms and later in fiat terms.

As mentioned above, big money is only looking to exit as early as possible and make a return on its capital. They’re not interested in any of the narrative, and they don’t care about these networks. If anything, they know it’s all hollow shell companies led by either opportunities or misguided founders who think they can improve on bitcoin.

The big money will back certain projects until they’ve made an exit and then move on to a new project where they can purchase an outsized amount of a certain network token allocation and then dump it onto new retail buyers at a higher price than what they paid.

For example, let’s say a network is launched and has a 50% pre-mine. If I am a large venture fund, I can come in and purchase 20% of the tokens from the founder at a discount. The project now has seed capital to operate. Once it’s open to the market, I have 20% of the coins and can slowly start to unload as marketing helps push retail demand for the supply I hold.

Once I am cleared out, I move on and take with me a large amount of capital that was keeping that market liquid for the time being.

The older the altcoin, the lower the highs

If we have a look at some of the popular altcoins that have lasted more than 1 bull and bear market cycle, we can see that holding these coins long-term is a losing game when compared to bitcoin.

If you don’t believe me, head over to your favourite coin, price it in bitcoin and set any long-term date range you like and the truth will quickly become evident. It’s the reason altcoin markets encourage you to stake your coins, risk them in DEFI protocols or trade them instead because they’re already facing inevitable devaluation against bitcoin, so you might as well multiply the risk and go for broke trying to outcompete bitcoin.

Altcoin underperformance when measured in satoshis across multiple cycles

Looking at the four coins above, none of them has been able to reach the all-time high in satoshi value for a second time, and while they may outperform bitcoin in fiat terms, they are losing value in bitcoin terms. This is the reality of investing in altcoins and the truth that altcoin shills and founders want you to never understand; they want you to keep measuring it against devaluing fiat currency, so you think you’re getting price appreciation.

But if an asset’s entire value proposition is to outperform bitcoin, would it not be prudent to measure its performance in bitcoin and cut through the noise of fiat?

Have you ever heard an altcoin proponent mention that their coin is rising in satoshis? No, because even if it did short-term, putting that measurement out there and making it known would be a losing battle long-term as bitcoin continues to crush all these coins over time.

Bitcoin is the apex predator of money, and if you want to take a shot at the king, you best not miss it.

As with most things altcoin, they’ve taken bitcoin narratives and crudely applied them to their ecosystem. While hodlers of bitcoin can be sure, regardless of the price in fiat, that they cannot be diluted of their position in the network, altcoiners don’t have that backing while still having to compete with bitcoin for liquidity.

As bitcoin continues to become scarce, these coins continue to generate more inflation, and over a long enough period, they break from their ranges in satoshi value and eventually start to their decline, as did the previous 100 or 1000 coins that came before it.

Have you fallen for the altcoin revolution where logic is thrown out the window and tokenisation is pitched as a way to solve all the world’s problems? Which token protocol happened to catch you with a clever narrative and had you hold it and provide exit liquidity?

Let us know in the comments below; we’re already keen to learn from others.

South African bitcoin pleb falling down the rabbit hole and willing to share every bump, scratch and knock along the way
View more articles from this author
PrevPreviousHow To Delete Your Nexo Account
NextHow To Delete Your YouHodler AccountNext