What Is A Bitcoin Derivation Path?

Home » Articles » What Is A Bitcoin Derivation Path? 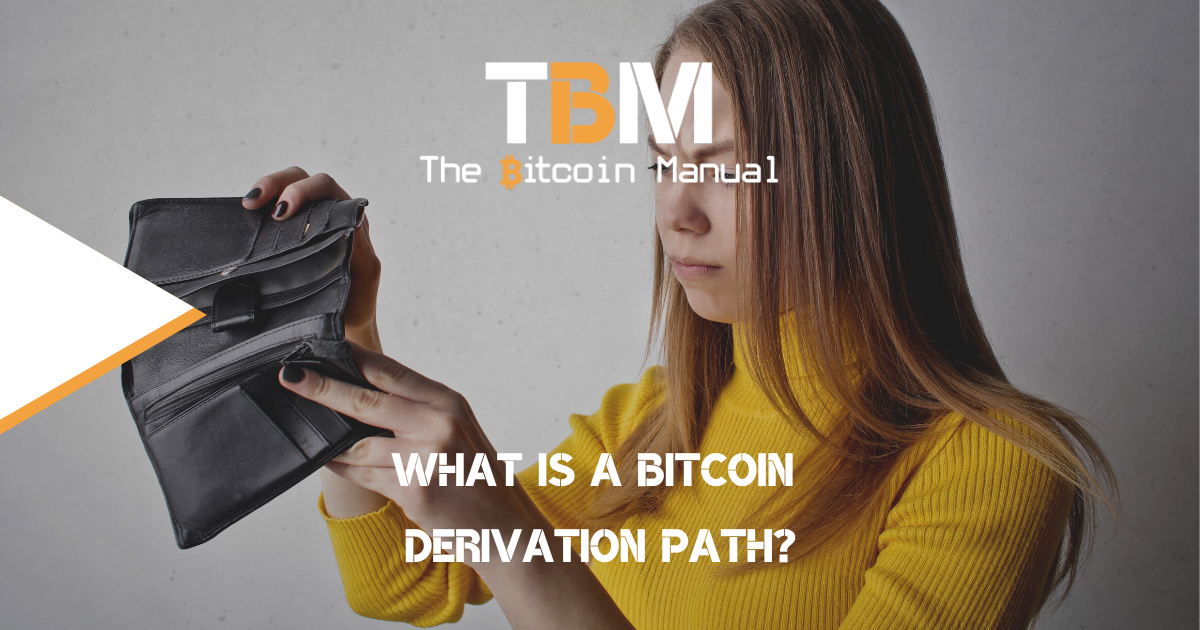 When you get into bitcoin and make your first on-chain transaction, it is quite the alienating experience, having to deal with these 12 – 24 words you had to save to create your wallet and restore it for future use. Then having to use those keys to generate public keys, which are these long strings of text or a QR code your freshly created bitcoin wallet will spit out to accept payments.

It might all seem pretty random, but there is a method to the madness behind this constant generation of public keys that lead to your wallet. Think of your public key as a tree base and each public key as branches from that same tree.

Each branch may seem different, but they all feed into the same base, so you can have multiple paths all pointing to one wallet without any issue. You can manage each public key, see what transaction was hosted with that key and your wallet or, rather, a signing device will give you access to all that data.

Bitcoin addresses have a pathfinder

When a bitcoin wallet is created, each one has a derivation path is a piece of data which tells a Hierarchical Deterministic (HD) wallet how to derive a specific key within a tree of keys. Derivation paths are used as a Bitcoin standard and were introduced with HD wallets as a part of BIP 32.

Each key in the tree of the Hierarchical Deterministic wallet can be described by its derivation path, which contains information about a key’s depth and index—where it resides within the tree structure.

In simple terms, a derivation path is a path to obtain something, from something else, in a very specific way. “Derivation Path” is a fancy way of saying, “This is the path/key/secret you use to get all your accounts from your mnemonic phrase.”

In a derivation path, the master key is simply refered to as ’m’.

The depth of each child is given by the number of levels—each separated by a slash—between itself and the master key, and the index of each child is its number at that level, starting with zero.

However, for children numbered 2^31-2^32 – 1, parent public keys are incapable of deriving children.

Only the parent private key is capable of deriving a child private key, which can then be used to derive the child public key. This specification allows for flexbility within the HD wallet standard. When a key is hardened, it is denoted with a prime symbol ‘.

Why are derivation paths important?

When you connect through a specific HD wallet, each wallet may use slightly different paths for connection. Each path will generate a new list of addresses relative to your private root key.

That’s why it’s important to keep derivation paths in mind when troubleshooting issues regarding addresses accessed with hardware wallets.

If you’re looking to do more research on derivation paths and get your head around the concept, then we recommend checking out some of the following sources as a jumping-off point.

Improve your knowledge of self custody

While self-custody is all about protecting your funds by creating a set of offline keys with the highest level of entropy, it takes time to become comfortable enough to get there. We all have our own journey towards taking ownership of bitcoin; some begin with a Lightning wallet, others may start with a hot wallet, and while these are better than holding it with a custodial service, there are further levels of security you can later migrate to, as you grow your stack or the relative price increases in fiat terms.

It might be fine to keep a few satoshis worth in a wallet on your smartphone where the keys remain hot on the device. Still, if you’re stacking in the 10s of millions or 100 million satoshi side of things, you may want to avoid skimping on your security as it could cost you severely down the line.

Is purchasing a hardware wallet and spending a few hours learning how to self-custody not a price you’re willing to pay to hold possible generational wealth?

Have you started to self custody of your coins? What event made you a self-custody maxi, or have you always held your keys? Are you still nervous about your setup and feel you can add additional layers of security and privacy?

Let us know in the comments below!

South African bitcoin pleb falling down the rabbit hole and willing to share every bump, scratch and knock along the way
View more articles from this author
PrevPreviousWhat Is FediMint?
NextBuild A DIY BlockClockNext