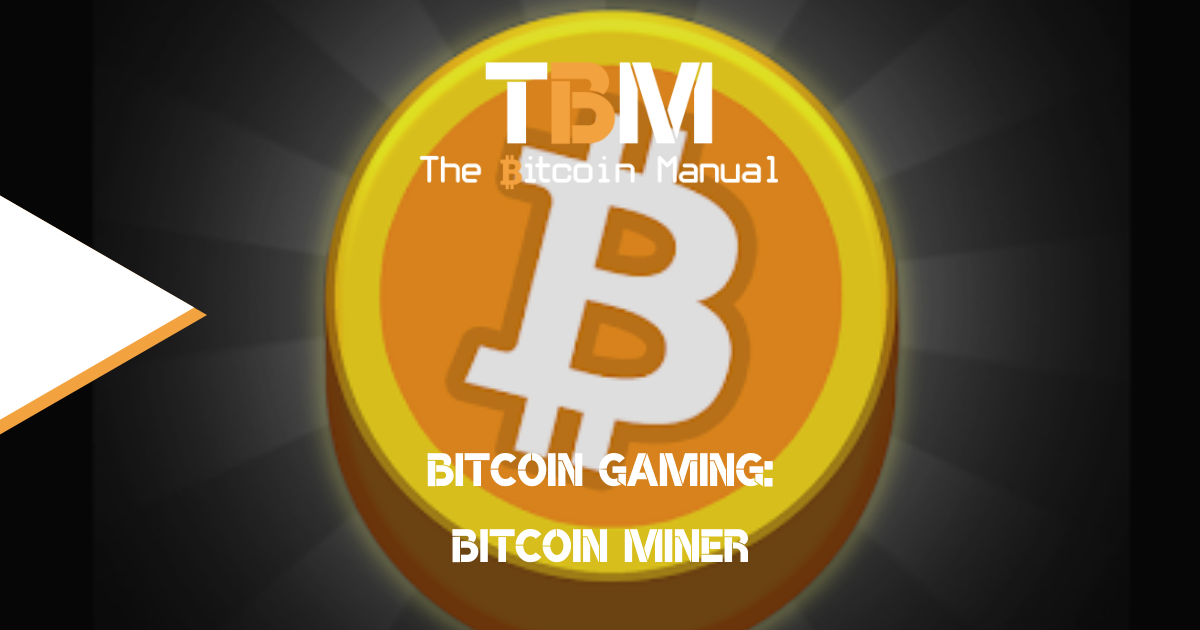 Mobile gaming is big business and is set to grow even more as time goes on with close to 2.7 billion of us wasting time on these devices.

However, with the advent of Bitcoin and the lightning network, the gaming industry is starting to be turned on its head as players can now be rewarded for their participation.

What the lightning network has done is enable smaller units of Bitcoin, called sats, to be sent instantaneously across the world between different people using lightning wallets.

This has made the tipping economy a lot simpler and bridged the gap between content creators, livestreamers and gamers to their fans, allowing for direct transactions.

As more games have come online, the potential to get Bitcoin in to the hands of 2.7 billion smartphone users is huge and we are doing what we can to spread the word at TBM.

We’ve covered Bitcoin mining on TBM but it can be daunting to get your head around setting up a fully fledged mining business when you have to factor everything in.

However, when a fun simulator game comes out for the smartphone that pays sats, it’s certainly going to get our attention!

Let’s find out more about the latest collaboration of ZEBEDEE with Fumb Games called “Bitcoin Miner”.

Fumb Games is a London based mobile gaming studio founded in 2015 that specialises in creating “merge fun for your thumb”.

ZEBEDEE is a global FinTech company that allows game developers to put Bitcoin into their games with a developer dashboard and API, which in turn lets gamers withdraw Bitcoin out with the ZEBEDEE app.

The two companies merged and recently integrated sats to this addictive mining simulator.

What Is Bitcoin Miner?

Bitcoin Miner is a mobile game where you take on the task of starting, building and then strategically expanding your simulated crypto mining business, whilst earning a few sats in the process.

There is a serious amount of tapping involved as you start off small and grow over time, finding the best way to expand your mining farm.

As your mining rigs churn out different cryptocurrencies, the coins are taken along a conveyor belt to your piggy bank where you build your pot over time and upgrade your set-up.

Power-ups appear above the different coins, which you tap to activate and help boost your income and, most importantly, sats balance.

Once you have built your mining business to a decent size, you can sell it for GPUs to start the process again to earn faster and grow your enterprise.

There is a lot to take with this game with so many things to tap on and an ever growing busy screen that it can be overwhelming to begin with but here’s the basics from the screenshot above, working from top left to bottom right:

Despite the game having plenty of things to tap and lots going on the screen, the experience of playing was really smooth and I haven’t experienced any lag.

There’s an element of strategy and timing when you upgrade, go for boosts and pay for developments so it’s not all just furious tapping of the screen.

However, there’s plenty of things to get stuck in to with this game and you will find it difficult to put the game down once you start.

How Can Fumb Games Reward Players With Bitcoin?

In a recent press release, it was revealed by Fumb Games CEO, Paul West, that when the game was first published four years ago, it actually “flopped” and they couldn’t find a way to integrate earning Bitcoin.

However, since partnering with ZEBEDEE, they have now managed to re-release the game with the ability for gamers to earn real sats.

There are in-game adverts as well which provide revenue but they aren’t too intrusive and didn’t affect the playing of the game too much.

How To Withdraw Sats From Bitcoin Miner

Once you have set up your ZEBEDEE app and chosen your gamertag, you will be able to withdraw sats from the game by tapping “cash out” at the top of the screen, which will show you this display:

Simply enter your ZEBEDEE gamertag, tap redeem and then your sats will be sent to your ZEBEDEE app. Be aware that you can only withdraw a certain amount of sats each day before your limit is reached.

My Thoughts On Bitcoin Miner

When I first heard about this game on the ZEBEDEE app, I was intrigued as I hadn’t come across the original game a few years ago and strategy games aren’t my thing.

Being a loveable Bitcoin pleb as well, it did feel a little dirty seeing all these other shitcoins on my screen again but with ZEBEDEE being a Bitcoin-only company, I knew the game was in good hands and I have found this game utterly addictive!

There’s a real sense of satisfaction seeing your mining farm grow and I’ve been picking up quite a few sats in the process over the last few days.

I’ve barely scratched the surface with the sheer amount there is to do in the game as you discover new areas on the map with more power-ups to tap.

It’s a simple game but strangely relaxing once you get passed the initial learning stages but if you want to liven up your experience, give the power surge a go and enjoy the buzz of activity that ensues!

What I like is that your mining operation keeps running after you close the app so when you come back after your battery died from overplaying, you will be able to upgrade a lot of your rigs!

Furthermore, the adverts are easily manageable and I didn’t find them too intrusive at all. A lot of the time, you opt in to watch them if you wanted some bonuses or power-ups for the game.

For me, it was well worth exploring this game and I’m glad I have, it’s a good time filler but just be warned its very addictive but you are getting sats, which is pretty good compensation if you ask me!