Why Art NFT’s Have No Real Value

Home » Articles » Why Art NFT’s Have No Real Value 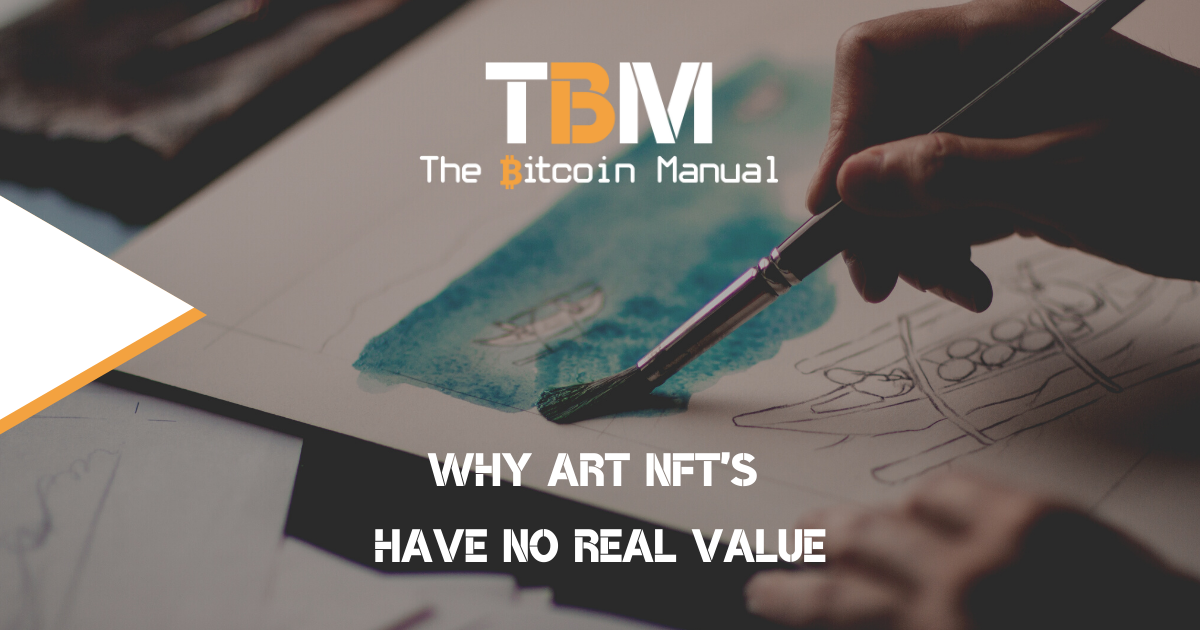 As one of the class of 2015/16, my first big scam cycle was the ICO era, ICO everything, let’s raise capital to decentralise Uber for toddlers, sounds good give me your token and take my BTC. Yes, many of us were that stupid; we didn’t think further than the fact that we could get more tokens, t turn into money later; the story was simply a nicer reason to gamble.

Many of us fell for the stupidity and rightly got wrecked, myself included and had to learn the hard way. Fast forward to 2021 and the next bull cycle, and NFT’s became the next brain blender, taking some logic and mixing it in with hopium, fame, riches PR and wash trading to make a chemical cocktail of financial fallacies.

Watching people not only buy but go all in, and shill these useless NFT’s and the mental gymnastics they use to justify it all became a pain for me. I gave up trying to reason with these people, and I knew as liquidity dries up, so does the lubrication for their stupidity.

As bitcoin continues to trend downwards and flash out the shitcoiners, I thought I’d take the time to put my thoughts on paper and discuss why the art NFT is a dumb idea.

Before we get into the thick of things, let me start by saying the concept of an NFT is not inherently a bad idea. It just doesn’t need to have any meaningful decentralisation, as long as it’s on a permissionless system; even if that were a centralised server, it would work fine. Creating NFT’s for items like concert tickets and vouchers makes sense. These items have a monetary value backed by what it offers you access to, like a venue or a promise of an item from a store up to a particular value.

An NFT version of vouchers or tickets makes it easier to distribute and attribute ownership and limit counterfeiting. These NFT implementations also allow for a secondary market where people can sell these items should they no longer need them or if preferences change to access the monetary value instead of the experience value.

To maintain the integrity of the claims these NFTs hold and validate the authenticity of these NFT’s. There needs to be a centralised entity that governs the issuance, it could be one entity or a federated system, but it has to be in place. If not, anyone could create them and make false claims because it’s on a chain, something we see almost daily in the shitcoin clown world.

Some would argue you could use several oracles and draw data into the blockchain, but why do you want to use such a convoluted system? Adding layers of complexity that otherwise are not needed, you can issue the claims on a blockchain and have a centralised issuer or federation of issuers validate them.

All NFT’s will always have a central point of failure, and that’s okay. NOT everything in the world needs to be decentralised; we’ve gotten on fine with the level of efficiency centralised services provided in various business sectors. It was only the money that needed to be ripped from the clutches of the state, something bitcoin solved; we don’t have to solve it again.

Art NFT’s the marketing vs the reality

The art NFT is pitched as a way for the artist to monetise their creations and generate an income for the starving artist, who has been marginalised, oh the virtuous nature of these projects, doing it for the creator and not to exploit others for profit using a substandard implementation of tokenomics.

Through the simple action of uploading your art to a server, you have no control over. Then purchasing a token, you have no need to use it as gas to mint the NFT so that you can then list the token on marketplaces hoping someone will pay you more than you spent to mint it. For artists, it brings in the sunk cost fallacy. You’ve already bought the token to mint and did all the work; you want your reward and set your profit margin.

For the token/chain, they created a new demand for their token, getting unsuspecting creatives to provide an investment in their coin and locking it up in another derivative token, the NFT.

Then there’s the speculators, those who are trying to buy an NFT and flip it, paying the artist the initial margin of profit only to add another profit margin on it, hoping a greater fool comes along.

The simple truth is having a blockchain doesn’t automatically make anything living on it valuable, immutable or scarce.

The blockchain is simply a way to record all transactions; that’s it. Taking one element of bitcoin’s secret sauce and applying it to hashing a token onto a chain that references an image URL on a centralised server where it can be changed, but your token’s reference of it cannot, isn’t the same thing, not by a long shot.

What are the issues with Art NFTs?

The art NFT is indeed more narrative-driven than practical, it has obvious flaws, but investors and artists alike are all turning a blind eye because of the promise of riches.

There have been several reports of people’s NFT’s disappearing because the image file referenced in that token is removed from a server, and the URL sends users to a 404 server error. Since most NFT’s are stored on centralised servers either through the minting platform or via a cloud service provider, the image link itself is not exactly immutable.

Storing an actual image on a blockchain would create so much bloat in data, so blockchains are forced to introduce external hosting, which is a central point of failure, that is exposed due to the tokens immutable nature, which will always record and reference the link when it was minted.

Some claim the NFT can be decentralised by referencing multiple hosting providers that could help reduce the single point of failure or reference an IPFS link, but this is only a stop-gap solution. If the file on IPFS isn’t accessed regularly, the file no longer has much value to the network and is often removed.

Now, sure, you could have a self-storage option that you pay for, but then how does that make the NFT an asset. If you’re paying for storage, then it becomes a liability unless you can generate an income to offset the losses in storage costs.

Art and collectables are highly subjective intellectual property; when it comes to collectables like sports cards or Pokemon. There is a massive central entity that validates the authenticity and protects the IP to retain its value.

Who is maintaining the value of these NFTs? Are there multiple oracles that need to pass through to review a minted NFT? No, any person can mint an NFT, so how do I know it’s that persons work?

How do I know how long they took to produce it, or did they photoshop something quickly and call it a day? How do we validate that this isn’t a right click and save and re-mint? When you have a permissionless service you open yourself up to the ingenuity of the public and scammers.

When I buy the NFT, do I also have the licencing to reproduce it or do whatever I want with it, like if I had the physical artwork or collectable? I doubt it, and who is going to enforce any of it?

An art NFT that holds any kind of value, would need to have a centralised service backing it and only use the blockchain as a distribution mechanism and a way to manage proof of ownership and transfer.

The way it’s done today, there is no validation, simply a team of manual curators on an open platform swapping jpegs for money. Nothing wrong with that I suppose, but we have to draw a line between gambling and investing.

The reason collectable cards, for example, are valuable is that there firstly were never collectable, to begin with, no one knew how rare they would become with them. There are fewer of the collectable available in a mint condition from the original print run.

For example, when they minted first edition Pokemon cards, kids eat them, ripped them up, played with them, lost them, burned them. Now those kids are in their 30s and have a bit of cash and feel nostalgic, and are willing to pay stupid prices for a piece of cardboard that was well looked after for decades.

Time and fragility give collectables value as there is a cost to maintain them.

What cost is there to maintain an NFT? How does it decay? Short of a bunch of people losing their keys to their wallets that manage the NFT’s will remain in circulation.

How can art NFT’s be used?

I am not saying the art NFT should be banned, I simply think the market and narrative around it needs to be realistic and price in the limitations of this implementation and remove the speculative nature we see today.

Art NFT’s are there to stay, but I think they will lose most of their premium and be used as:

The last year of NFT speculative mania is venture capital money sloshing around trying to attract retail capital to a market and using wash trading as a marketing tool and PR of crafted “success stories” to sucker in people to buying their token and trading it for NFT’s.

NFT proponents can pretend all they want about disrupting the art world but it’s not true. Whenever I see tech enthusiasts speak about morality or promote some disruption of protectionist angle for why they do things, I can’t help but cringe.

We all know you’re full of shit; some may be naive but the vast majority know it’s nonsense, but accept it as part of the game of being close to the money and being in the money circles. NFT’s to me are an idiot tax, on those minting NFT’s and trading NFT’s! The only ones winning at the moment are the platforms collecting fees on these faux collector items.

If you want to create NFT’s or buy NFT’s by all means, go ahead, this is just one guy’s opinion on the internet.

South African bitcoin pleb falling down the rabbit hole and willing to share every bump, scratch and knock along the way
View more articles from this author
PrevPreviousHow To Set Up A Bitcoin Wallet With Jaxx Wallet
NextBitcoin Gaming: Lightning CrushNext