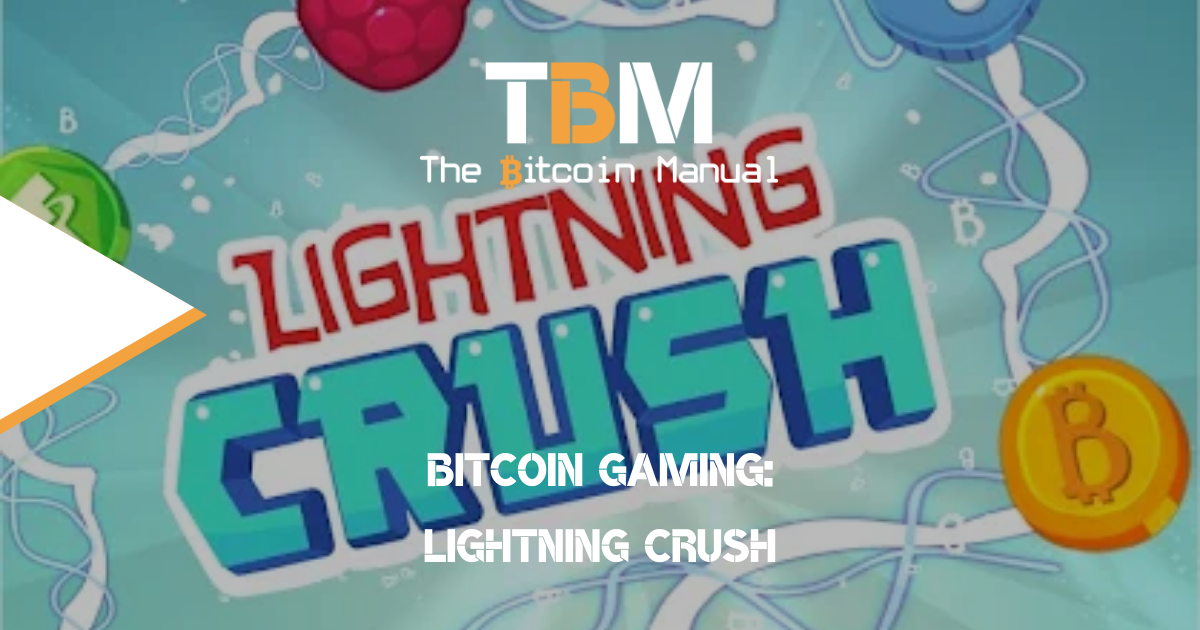 Picture the scene. You’re at your day job or you’ve made it through another day of a morale testing session of fiat mining. You need to unwind and distract yourself with a quick match-3 game of something on your smartphone.

That Candy Crush game you’ve been playing all this time hasn’t given you a single chance to win Bitcoin?! My friend, you’re doing it wrong!

Yes, you see, Bitcoin gaming is a thing and has been growing at a steady rate over the last year or two. This is because developments on the lightning network have allowed fractions of a Bitcoin to be sent to anyone across the world instantly and for next to no fees.

Instead of just being a “user” with these legacy mobile games, Bitcoin gaming companies are looking to turn that model on its head and give back to players all around the globe.

And if you played one of the most popular “match-3” games of all time called Candy Crush, then you’ll most certainly be interested in the Bitcoin equivalent called “Lightning Crush”, designed by Koji Higashi and powered by Zebedee.

Koji is a Japanese wizard entrepreneur who has been active in Bitcoin since 2014 and is an angel investor with a YouTube channel focusing on bringing the latest news to his followers in Japan.

One of his latest projects is the development of Bitcoin game, Lightning Crush, where he has partnered with Zebedee to make use of their lightning wallet for gamers.

Zebedee is a company that has been focused on bringing Bitcoin to the gaming masses via the lightning network since 2019. Gamers that use Zebedee’s wallet can easily tip sats to their favourite livestreamers, content creators and fellow gamers.

What Is Lightning Crush?

Lightning Crush is a match-3 game, based on the same principle of Candy Crush, where you have to match 3 or more of the same coloured pieces and complete levels of increasing difficulty. These pieces are made up of bitcoin (and other crypto project logos known as shitcoins).

When you complete a level, you get rewarded in fractions of a Bitcoin known as sats and there are events on the last Sunday of each month organised by MintGox.

The downside is that Lightning Crush is only available for Android users at time of writing.

The character at the top of the screen is called “Badger-Kun” I think and he really wants to help you win some sats!

There are power-ups you can use to help you progress in a level if you’re close to completing, which cost you in-game coins.

You can get these coins by taking part in the daily spin, your first go is free and there are plenty of these coins up for grabs.

The graphics of the game are fun and run smoothly, with the characteristic sounds and music you’d expect from game like this.

If you get stuck and can’t see a move, then the game will highlight a move to you to stop any frustration.

At the beginning of each level, there’s information on what you need to do to complete the goals and get the reward in sats. These rewards generally increase as you go up through the levels although are not guaranteed.

The display of the game is very responsive to touch, so much so that it registered a few “Miss Swipes” when I was playing on it – the evil mistress of match-3 games strikes again!

Also, if there are no more moves, the game takes a couple of seconds before re-organising the pieces so that you can start swiping and matching again.

When you complete a level, you don’t need to do anything to claim the sats and you can just focus on playing.

How Can Lightning Crush Reward Players With Bitcoin?

Lightning Crush is partnered with and sponsored by various companies to help spread the sats out to gamers who love to play match-3 games! These partners include MintGox, Zebedee, Bitrefill, CardCoins, Aglet and Fulgar Ventures.

I actually haven’t come across any in-game adverts other than a broken link to a Nayuto Core lightning wallet in the game. There isn’t a store that I can see where you can buy things or watch adverts to get more coins either so I am not certain about ad revenue here.

It seems as though the partnerships and Koji himself are fully funding the game, which is awesome benevolence!

How To Withdraw Sats From Lightning Crush?

You will first need to connect one of the two lightning wallets that are supported in the game.

As much as I was trying to find a download link to the Nayuto Core wallet, I don’t think it’s available or is currently down as it moves through beta development.

Instead, I had no trouble connecting my Zebedee wallet in the game which is really straightforward. From the home screen, go to the settings menu which is the little cog symbol in the bottom left.

Once you have submitted this then you should be good to go! You can check it’s connected by going in to the map of the levels and tapping the Z symbol at the bottom of the screen. It should display the following message when you tap on it:

Once you’re set up, you won’t have to do anything else, the sats will automatically be delivered to your Zebedee wallet so you can play the game and get as far as you can!

Bear in mind, you won’t get rich with this game alone but I found the amount of sats is very reasonable and a good chance to stack a bit more for playing a fun game.

My Thoughts On Lightning Crush

When I used to play the old Candy Crush game, I could feel myself getting sucked in to its addictive nature and had to take drastic measures – i.e. I went cold turkey and deleted the game as it was a massive time waster that I didn’t get anything back for.

However, as I was discovering the wide world of Bitcoin games and stumbled across Lightning Crush, this got me excited, especially after covering another game from Zebedee recently. Seeing them partnered with it gave me confidence this would be worth investigating.

Personally, I love the game and have found myself getting sucked in the last few days playing it. The graphics are smooth, the game plays like a well thought out, proper mobile game and it’s so easy to connect the Zebedee wallet.

The automatic sats payment to your Zebedee wallet makes it all seamless and you can just plough through the levels. I got up to level 82 before I knew it and then it dawned on me that I should write an article here on TBM lol.

No, I won’t be quitting the day job from playing Lightning Crush but it feels great to get some sats when its predecessor was a mainstay on my phone.

If you were a big player of Candy Crush, delete that and upgrade to the Bitcoin version of Lightning Crush and earn something for that time which would otherwise have been wasted 🙂

To download Lightning Crush, it’s available on Android only for now:

British bitcoin pleb falling down the rabbit hole and willing to share every bump, scratch and knock along the way
View more articles from this author
PrevPreviousWhy Art NFT’s Have No Real Value
NextWelcome To “Shaft-flation”Next