Home » Articles » What Is BiFrost? 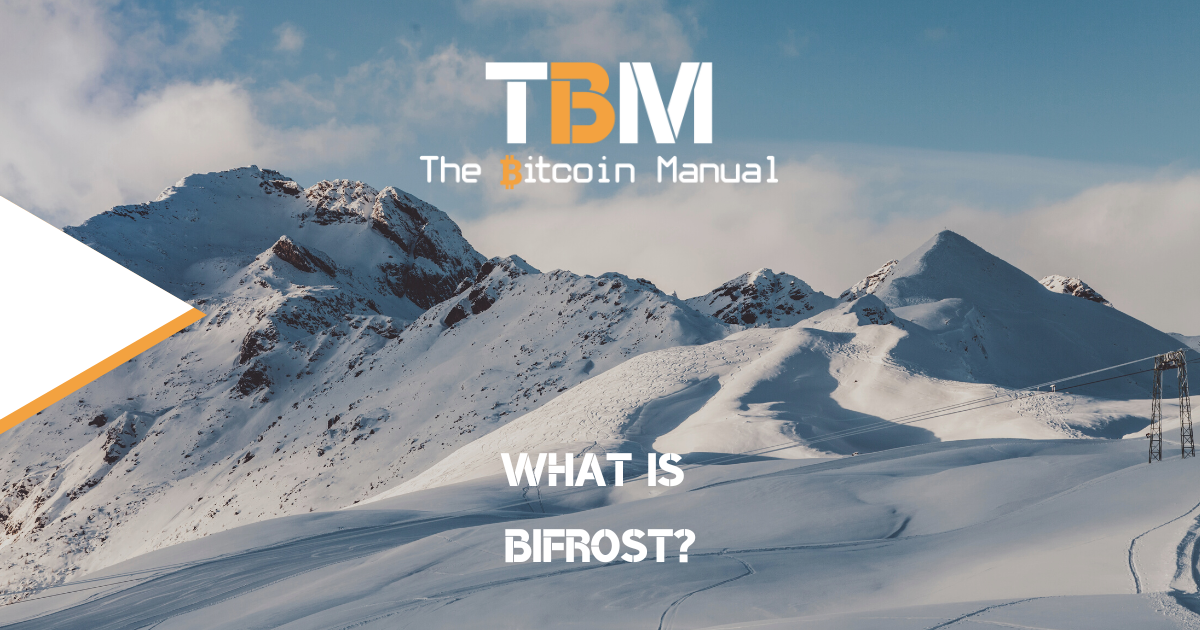 One of the most common critiques of bitcoin is that it is old technology. It’s the “boomer coin”; it can’t do smart contracts or whatever weird and wonderful tech jargon or acronym the crypto space comes up with to drive their next round of investment narratives. Those who critique bitcoin solely on a tech play often ask why bitcoin does not have this feature or that feature rather than asking, “should” bitcoin have this feature or that feature?

The rush to compete with bitcoin has seen other blockchains drive features that aren’t compatible with an immutable base layer and provide more headaches than it solves.

When you’re building new protocols and feature sets on bitcoin, it’s important to consider the constraints of the base chain and to work around it, and find ways to complete the existing system. These limitations can feel like a restriction to many developers, which is why they’ve chosen to work on other systems where rules can be changed with enough money, motivation or political pressure and the protocol is far more malleable, making it easier for developers to create products and services.

What they gain in speed of deployment they lose in having these products tethered to a reliable network and a sound money standard.

Instead of trying to force every idea onto the bitcoin base layer, bitcoin scales in layers. We’ve already seen the launch of second-layer solutions like Liquid and Lightning that offer unique environments with their different trade-offs and cater to certain use cases and audiences. They will not be the first nor the last.

As the foundation is laid by these layer two protocols, we’re starting to see the emergence of more experimenting and creative freedom by developers. When you’re only using the bitcoin layer as the final settlement, you can build layers for different use cases.

This might come as a shock to altcoin proponents, but bitcoin can have environments where Turing completes smart contracts, and more can be added without the need for putting everything on chain. Solutions like the RGB network bring a host of new services for bitcoin users and bitcoin companies to leverage on top of the existing network and infrastructure.

Instead of having to use another chain or add too much complexity for the end user, the RGB network is also interoperable with Bitcoin and Lightning, as well as updates like Schnorr, Taproot, and DLCs, and will not require any changes to either Bitcoin protocol or Lightning.

Bifrost is an extension to the Lightning Network peer-to-peer protocol, which would allow you to send client-side validation data using Lightning itself. A user could make RGB-20 payments over the Lightning and enable more advanced services such as decentralised exchanges that host bitcoin, Lightning network-based assets or RGB-based assets.

BiFrost can also facilitate smart contracts that could be embedded into traditional internet architecture to allow for services such as decentralised storage, DeFi, advanced smart contracts and asset creation.

Where does BiFrost fit into the stack?

Bifrost, while created in conjunction with RGB, is not a part of RGB; it’s an additional protocol that makes it possible for RGB wallets to work on Lightning; think of it as a riding network between the two environments to allow Lightning users to leverage RGB based services as well as giving liquidity locked in Lightning access to RGB services.

In some instances, the features of the BiFrost protocol can be compared to an improved version of Watchtowers currently present in Lightning but one that does not break the backwards compatibility. Bifrost to RGB is something like Watchtowers are to LN node but with a lot more functionality involved.

From the programming standpoint, unlike RGB or client-side validation technologies, Bifrost is much more flexible. While from a user experience and adoption perspective, Bifrost is needed to create the bridge for users and liquidity before the RGB release both as a protocol and as a code that can be put into mobile wallets, thus also showcasing how RGB over Lightning transfers can be used from a mobile device.

What can you do with BiFrost?

Trigger warning, I know this might set off a few bitcoin maximalists due to these buzzwords being synonymous with shitcoin scams and Ponzi schemes, but the RGB network will allow for a host of innovations we’ve come to know and loath due to their shoddy implementations we’ve seen thus far.

Bifrost acts as a public key-value storage token for keeping information on client-validated data in an encrypted way and provides a foundation for any node to implement the following functionality:

If you would like to learn more about BiFrost and its possible implementations and feature sets, we recommend checking out the introduction video below

Moving through the layers

Bitcoin is moving closer to its second decade of existence, and during that time, there has been a lot of research and experimentation in the area. Both the successes and the mistakes have allowed us to understand a little more about how decentralised systems behave in practice.

We are not only learning about what works for bitcoin, but also seeing what products the market is ready for in the larger cryptocurrency market and if there are any successful ideas to come from their experimentation; having an environment that can easily migrate it to bitcoin is good for the ecosystem.

RGB has its own rabbit hole, and we’re only in the early stages of bitcoin expanding into building out its own decentralised finance ecosystem and finding new ways to integrate with existing internet architecture.

If you would like to learn more about BiFrost or RGB network and dive down the rabbit hole, then we recommend checking out the following resources.

Give us your take on RGB

Are you a bitcoin purist that refuses to use anything but the base chain? Are you new to bitcoin and didn’t know that second layers and side chains exist? Have you looked into the RGB network before? Which use cases seem interesting to you? How do you think it compliments the base chain or the Lightning network?

South African bitcoin pleb falling down the rabbit hole and willing to share every bump, scratch and knock along the way
View more articles from this author
PrevPreviousForget Credit Scores; Embrace Equity Scores
NextWhat Is The Bitcoin Ring?Next