Home » Articles » What Are Slashtags? 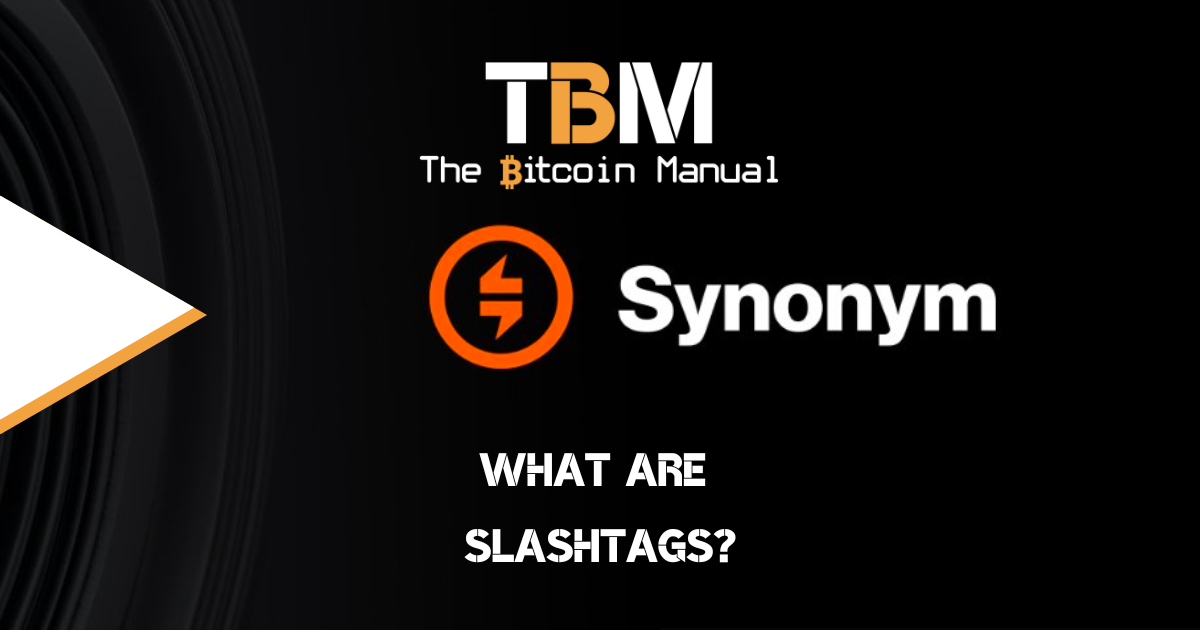 The bitcoin network has brought self-custody and self-sovereignty to money, should you choose to hold and spend your bitcoin using your own infrastructure. Once you set up a bitcoin node and connect it to a wallet, no one stands between you and broadcasting transactions directly to the network. The concept of taking control of your digital experience and value storage is now out of the box, it’s not going anywhere, and there will only be an evolution of ideas rolling out that take this idea to heart.

The bitcoin and bitcoin adjacent stack of tools continues to expand year after year with new applications, protocols and integrations, all tackling different pain points we face with the current state of the internet. While bitcoin continues to prove itself worthy as the world’s only decentralised network for value exchange, protocols built on it will provide decentralisation and ownership in other means.

In the case of Slashtags, we have a new weapon in the growing arsenal; Slashtags is a network protocol for establishing self-sovereign web experiences and is designed to enable the new layer on the web, ideal for a parallel social economy.

Slashtags aims to bring self-sovereign identities to users and allow for the building of local first applications, and create a reputation system or web-of-trust. Slashtags uses keyPairs to identify and address peers and attach metadata about them, giving rise to reputation and private yet interoperable webs-of-trust.

Today when we connect to websites, applications or services provided on the internet, we share our IPs (Internet Protocol addresses) which are used to identify where your machine exists both geographically and topologically. But you (or your machine, for that matter) can’t be identified or addressed regardless of its location or the network it is using.

So the current web relies on a network of mediators and service providers that you have to be tethered to one of them to be addressed or identified. Giving rise to censorship, surveillance and vendor-lock problems, the latest of which slowed down the rate of innovation significantly.

A Slashtag is a keyPair indirectly derived from the same seed that backs up your bitcoin; you can publish metadata about your Slashtag using a Hyperdrive identified by the same public key, for anyone to read. If you’ve already created a bitcoin wallet before with a seed phrase, you might grasp the concept a little easier. In bitcoin, you have created a wallet that only you can control and sign transactions from, it’s your unique ownership of a piece of the chain, and you can move data in and out of it, that data being UTXOs of bitcoin.

The Slashtags protocol borrows from this system of ownership verification but allows for the verification of external data, which makes it very useful in an internet riddled with misinformation and duplication and no way to really verify authenticity or score people accordingly.

Consider the following example of Slashtag uses; you can publish your current Email address, Website URL, Twitter handle, Facebook profile, etc. And your contacts who identify you through a Slashtags-compatible wallet can always find and reach you, making your identity and reputation censorship-resistant since only you have the seed phrase to write data to that Slashtag. At the same time, everyone who runs the software can review and verify the data placed in the Slashtag, similar to bitcoin nodes reviewing the blockchain for transactions.

Slashtags can also be used to communicate with one another since can also directly contact a Slashtag owner if they are listening on their public key, independently from their IP address, thanks to Hyperswarm’s Distributed Hash Table (DHT).

Slashtags can also create private encrypted drives and share them with one or many peers, serving as either a private feed or a one-to-one asynchronous communication channel.

Synonym, the company behind the protocol releasing Slashtags, wants to see it used to leverage a web of trust model to create interoperable, uncensorable networks connected via encrypted private channels and feeds. There are plans for Slashtags inclusion in a search and publishing platform that enables users to create and monetize data and a user-centric decentralised social media platform.

So, Slashtags sounds cool and all, but how would it work in practice, and how do we overlay this protocol using the current web as a template and integrating it into a user experience people already understand?

This is a Chrome-compatible extension that allows early adopters to experiment with the Slashtags Accounts experience. This app supports storing your website accounts as Bitcoin keys while automatically detecting and interacting with websites that support Slashtags.

This Slashtags account module allows websites to offer passwordless accounts that their users control and back up themselves. Slashtags Accounts use bidirectional authentication to mitigate various MITM attacks, prevent insecure password behaviours, and make it harder for websites to be censored.

The contacts module allows any app to offer a Bitcoin-integrated phone contacts experience where users can privately connect and selectively choose which metadata to share.

Based on Slashtags Accounts, Feeds are end-to-end encrypted channels that allow websites to offer dedicated feeds, much like traditional API keys, except using the same key you log in with and the same keys you back up with your Bitcoin wallet.

Slashtags can also be used as a compatible authentication and networking protocol. Slashtags Actions allow you to wrap any application function within verifiable keys using encrypted communication channels, consider signing into a website as an action or migrating your account to a different service provider.

If you’ve been curious about Slashtags and Synonym and want to give them a try, then check out their site and GitHub, where they open-source the code so bitcoin app developers can review and start to integrate these services into their products.

If you want to learn more about Slashtags and dive down the rabbit hole, we recommend checking out the following resources.

South African bitcoin pleb falling down the rabbit hole and willing to share every bump, scratch and knock along the way
View more articles from this author
PrevPreviousBitcoin App: SatsPay
NextWhat Are Zero Confirmation Transactions?Next