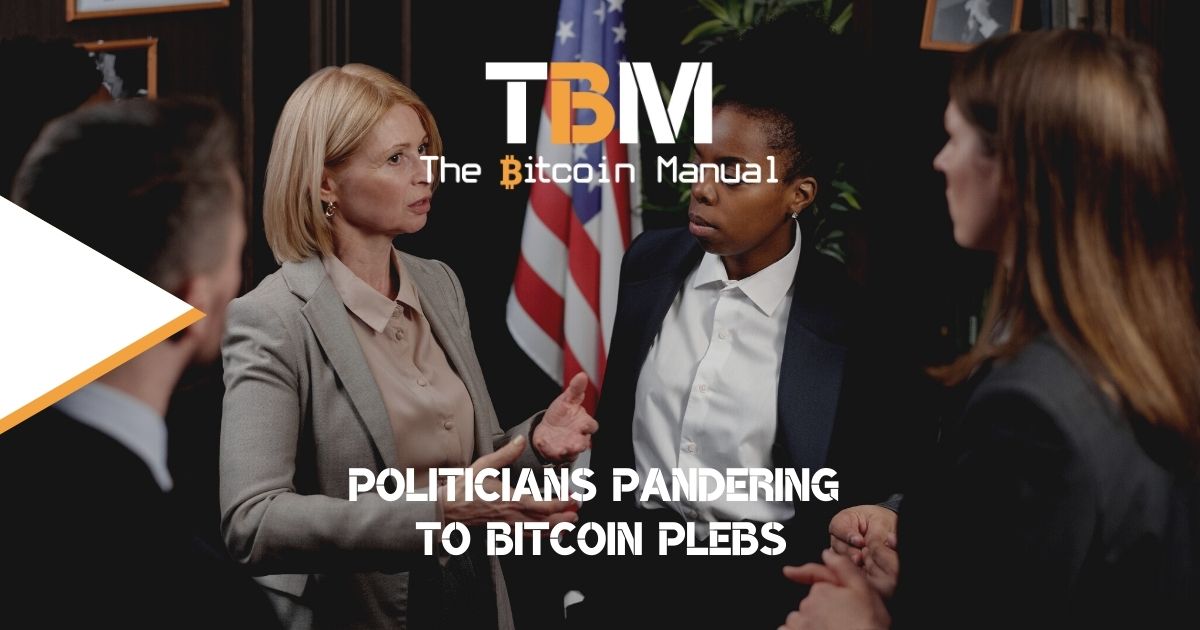 Bitcoin started as a ground-up movement with a few nerds and then expanded to ordinary plebs who thought this was something worth supporting. As Bitcoin’s NGU technology continued to fund the pleb movement, companies came in to build new rails in and out of Bitcoin, and it continued to grow.

We’ve moved from laptop and garage mining to massive institutional mining with geopolitical ramifications. The game theory of incentives in Bitcoin continues to rope in more people from all walks of life and classes.

In 2020/21, we’ve seen how it has started to infiltrate the political class a different class and started to become an important issue where politicians would either before or against Bitcoin.

Bitcoin is a political issue.

Bitcoin is now starting to become more of a thorn in governments sides, they can see capital fleeing their system, and they will have to choose who to handle this sea change. You could opt for the Chinese, Turkish and Nigerian approach and play hardball.

Try to ban it and see how far that gets you.

Alternatively, you can opt for the El Salvador approach and openly embrace it as a currency in your country.

These two examples are the outliers, and there’s room for nuance, and each country will pick where they want to operate on the spectrum.

A few months ago, I didn’t think many people knew who the hell Nayib Bukele was, but he made a bold statement by fast-tracking Bitcoin and making it legal tender in El Salvador. I was guilty of getting swept up in the hype, that I’ll admit. For years Bitcoiners have been talking about the theory for the circular economy and absorbing smaller nations, and he proved that this would be the future of Bitcoin.

It was a bold statement that has made him wildly popular among a specific subset of Bitcoiners. Those who are more cheerleaders than critical thinkers.

Has he made some great strides? Of course, his fast-tracked regulation, infrastructures like wallets and mining operations and his actively using the treasury to stack sats. That may seem like progressive moves, but I am still not convinced; stacking is one thing, but deploying capital is entirely different.

I would like to see how this Bitcoin will be used to benefit citizens and don’t see it as a given that Bitcoin changes the status quo just yet.

US politicians are pandering to Bitcoiners.

The amount of media attention Bukele has received has not gone unnoticed, and we now have an arms race of Bitcoin simps in the political ranks. Now I have nothing against Cynthia Lummis. She’s campaigning and pushing for better regulation for Bitcoin, not that I think it matters, but you know, good for her. If it’s within her remit to do so, by all means, you do you, honey.

We all orange pill in within our sphere of influence, and if this is your way of doing it, good on you.

But lately, we’ve seen a spat of Bitcoin simps trying to get a rise out of Bitcoiners, and I think it’s pathetic.

You could already purchase Bitcoin privately, so what is the point of these statements? Other than to pander to Bitcoiners and try to manufacture some popularity points, ones you’re sadly not going to get for me.

I don’t see why some people in Bitcoin celebrate this as a victory; to me, it goes against the ethos of Bitcoin. Why should I celebrate that some person who benefited from the money printing and made a career of stealing from inflation and tax now buying Bitcoin?

I don’t care if it adds to the market cap of Bitcoin; I’m not easily bought.

I will not forget all that they’ve put people through, especially in the last two years. They’ve been part of the misallocation of resources for years and turned a blind eye to many of their constraints issues, all the while sucking up inflation for little to no productivity.

So why should we champion these people?

What have they done besides securing a position in Bitcoin for themselves from ill-gotten gains? It’s so gross when I think about it, and people are cheering them on.

If you want to take a position in Bitcoin, cool, stack sats, that’s your right, but shut the fuck up about it; it doesn’t benefit anyone else but you.

If I saw a politician pushing for tangible change like having Bitcoin as a legal tender option, or adding more Bitcoin-friendly regulation or zero tax on Bitcoin, perhaps I’d consider giving them a thumbs up.

But as for now, they’re just the same politicians they always were and thought they could gain popularity using Bitcoin as a vehicle for their campaign.

The bigger bitcoin gets, the more irrelevant old power structures should become.

Perhaps I am jumping the gun, and it’s simply a moment in history; as Bitcoin continues to grow, it will drown out all this noise. I think that the amount of money coming into Bitcoin is a new temptation that Bitcoiners will have to deal with and will be the test if we are really to hold to the ethos of Bitcoin.

This was an opportunity for a fresh start, and I can’t help but feel like cheering the establishment’s adoption of Bitcoin does the goal of Bitcoin a disservice. I accept that this is a part of the adoption curve.

Bitcoin infiltrates our current institutions, puts handcuffs on them and makes others obsolete with time, or so I hope. Bitcoin is meant to upset existing power structures, not maintain the status quo and praising politicians for their association with Bitcoin is still fiat thinking, in my opinion.

I am still of the opinion that these politicians won’t change their spots. I think politicians who take a stand against Bitcoin are far more helpful. Those that avoid Bitcoin get defunded and made irrelevant, and we can get these decision-makers out of positions of influence and build a new system based on hard money ideas.

Not politicians who are larping on a new trend in the hopes of support.

South African bitcoin pleb falling down the rabbit hole and willing to share every bump, scratch and knock along the way
View more articles from this author
PrevPreviousDo You Need To Pay Taxes On Bitcoin In The UK?
NextMaintaining Your Purchasing Power In A Crack-Up BoomNext